You really can't miss the place if you pass by. And if you've seen the 1888 Second Empire building with the mansard roof at 419 W. Vliet St. – it's painted blue – you'd definitely remember.

Built in 1888 by William P. Froehlich as a paper warehouse, it was almost immediately occupied by the Wood Steam Laundry.

The Wisconsin Historical Society calls it a "two and one half story" building that is a "good example of an unusual form of cream brick warehouse. Possesses integrity of form and elaborate original stone hood over doorway."

After years of slowly rotting away – even from the outside you can see the growing holes in the roof – the building has been purchased by Patrick Prabhu and Karl Rajani, who plan to add to the building and open a hotel there. 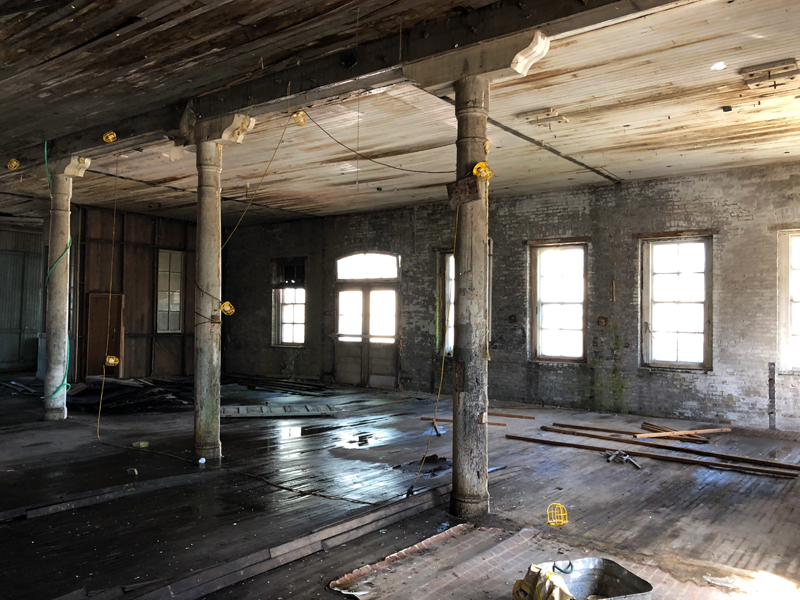 "We want to get this ugly blue paint off, take the roof off, because it's in really bad structural shape, maybe go to two more stories, and maybe build out this way," onto what is currently a vacant lot to the east of the building, Prabhu says.

"But bring the Cream City brick back out. Maybe clear coat it to protect it, and then maybe – if you can find Cream City brick – wrap it all the way around (the new construction) to integrate it architecturally, and go four stories high."

Prabhu – who also owns the Hotel of the Arts/Days Inn nearby on North 6th Street – says he thinks the project would include, between 30 and 50 rooms.

Prabhu plans to remove the mansard roof, which is in noticeably bad condition. The third floor (which WHS called the half floor, but is clearly a full story) would be one of the two new stories Prabhu plans to add.

Those will have lower ceiling heights, he says.

"Right now, each floor is like 12 and a half feet. We don't need that. We only need 10, which is more than enough. So the third and fourth floors will be 10 feet each story, then it'll be a little bit shorter than it would've been if we went all the way the same ceiling height."

He plans to keep the current fenestration of the 7,500-square foot building. Support spaces, like laundry, would be located in the basement. 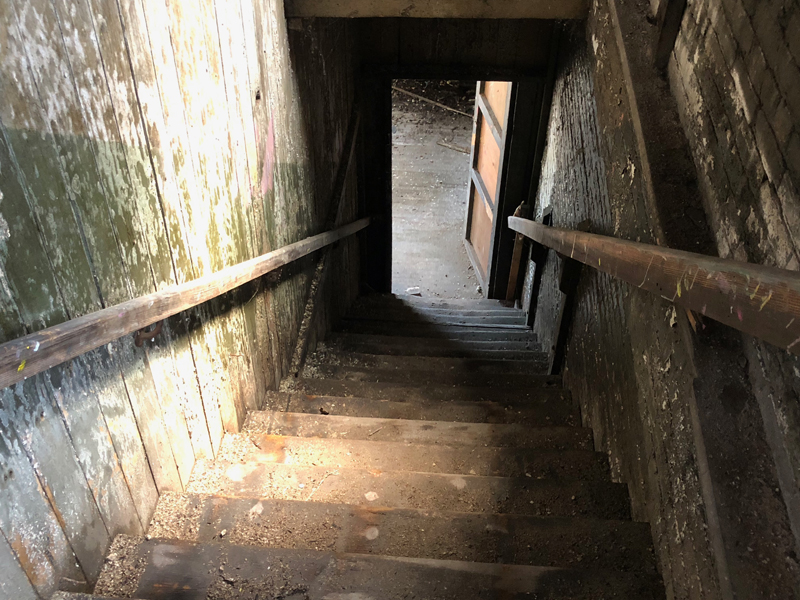 The current plan, says Prabhu is to give the hotel a unique name and brand it as part of Wyndham Hotels' Trademark collection of boutique hotel.

As for the name, Prabhu is still tinkering, but he has ideas. 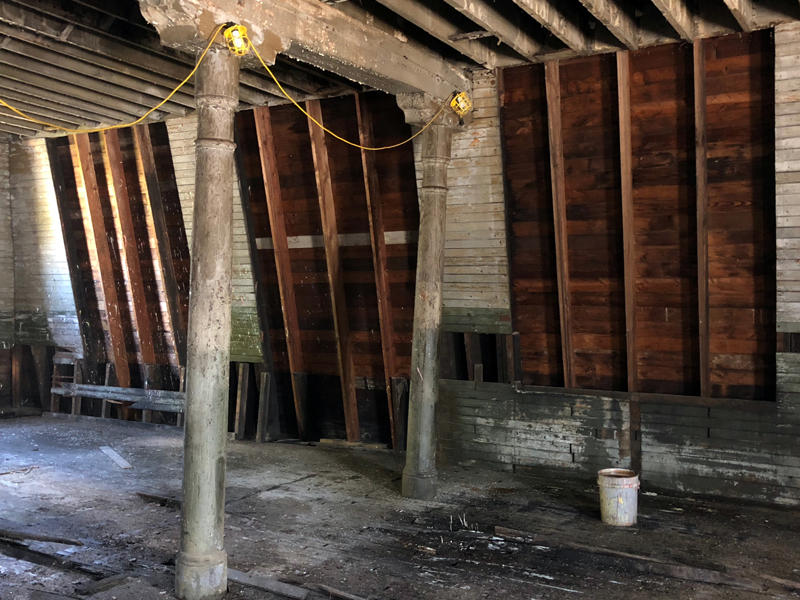 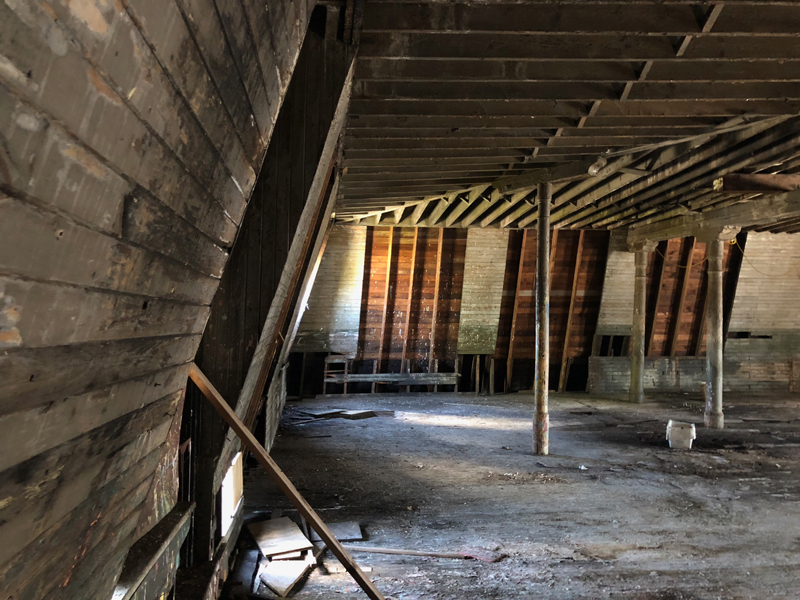 Despite the fact that there's a stone above the entry door engraved with the date 1888, the Wisconsin Historical Society notes that tax rolls suggest a building occupied the site even earlier, from 1884. 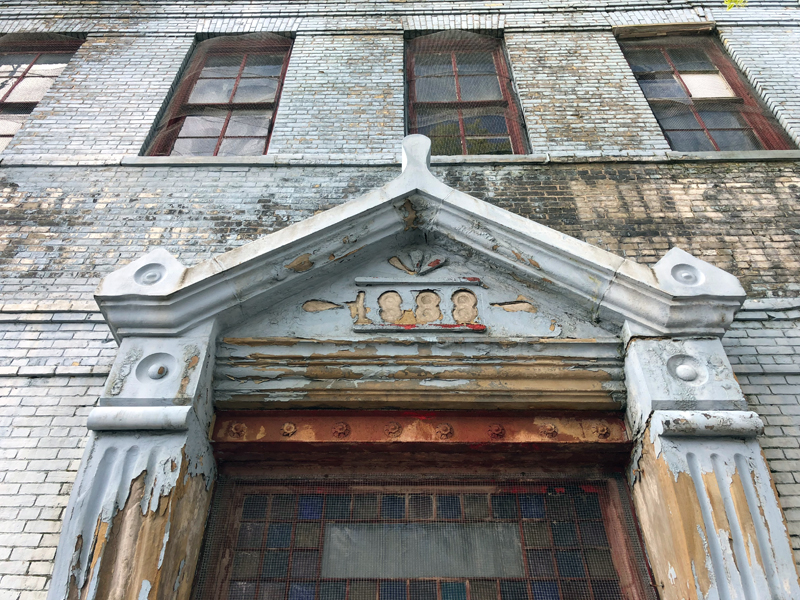 Its builder, Froelich was a rag and paper merchant, who used the space for storage for his business and early on, in the back of the building, the evocatively named Beer Brothers Horses Sales had an inventory of 50 horses for sale, including a range of both "heavy draft and fancy drivers." 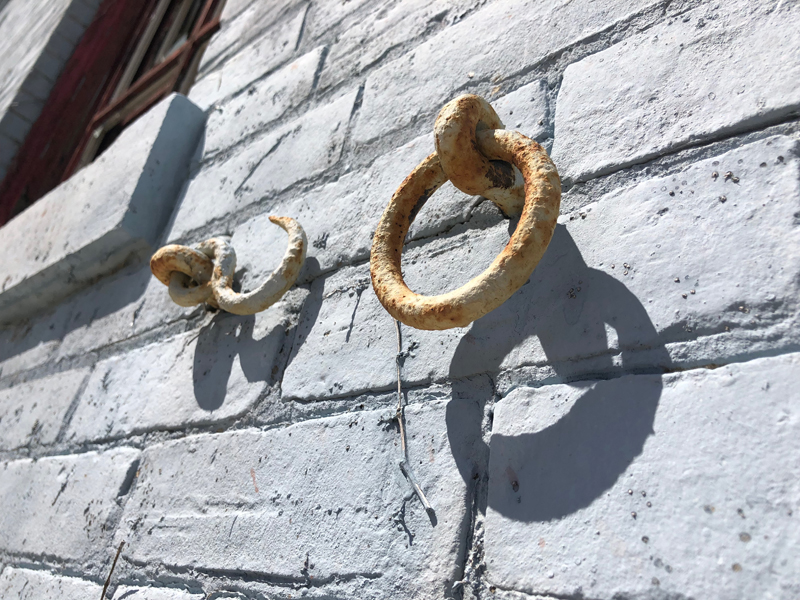 By 1889, however, the building was being used by R.A. McCullough and Frank C. Kane for their wood steam laundry business, which was headquartered at 624 Grand Avenue. In 1891, ads for the business called it McCullough & Dixon Co.'s "The Laundry."

An 1893 news brief noted that a creditor deemed R.A. McCullough and Co. launderers insolvent, but the owners coughed up $14,000 and stayed alive. By two years later, The Laundry was sharing the building with Mills-McCullough Soap, which was using steam power to run its soap factory there, too.

Fortunately, Champeny was a believer in advertising and so we have some hints about it (as well as tantalizing remnants of old dairy-era ghost signs on the building's exterior).

In addition to selling cream, buttermilk, sour cream, butter and other dairy products (Champeny had creameries out in Waukesha and Washington County) he business appeared to sell creamery equipment and like custard machine operators a few decades later, the company was helpful in getting burgeoning creamery owners up and running.

One classified in 1900 urged hopefuls to write to Champeny, "To hear of good situations in the country to start skimming stations or creameries."

That same year the company had an eye-catching ad boasting of the freshness of its products with a warning, "Don't kill your customers!"

But Champeny doesn't appear to have lasted long on Vliet Street, moving that same year to Juneau Avenue.

Woods' Laundry, on the other hand, can be found referenced in newspapers for a few more years, in ads, in classified ads selling horses (like a 7-year-old Buckskin it was looking to unload in 1908) and seeking employees, such as "Mangle Girls," whose job was to operate "mangles" that pressed laundry like a giant iron.

By 1912, the building was owned by Williams and Williams and occupied by Milwaukee Steam Works, which did remodeling and repair work.

Six years later, the Wobst Schoe Company opened a shoe company in the building. By the time it held its liquidation sale there in 1931, it was called the Smartstyl Shoe Factory.

The building's dairy connection briefly returned at this point when the Krasno Quality Egg Company used the entire building for empty egg carton storage in 1934, before making way in '35 for the Albert K. Keipper's Keipper Cooping Co., which made wire chicken coops and offered, according to an advertisement, a "full line of Marvelous Feeds and Vegetable Yeast for poultry, our mashes are all mixed with Marvelous Vegetable Yeast."

In 1941, with Williams and Williams apparently still the owners, the Schneider Boat Co. replaced Keipper on the first floor, where it manufactured row boats for three years, before being replaced by the Riesen Chemical Group, which initially used the entire building for compounding cleaning powders.

It's president, Paul Riesen, had also bought the building and seemed to be something of a Renaissance man. In 1949, he opened Woodcraft Artisans on the second floor to manufacture furniture and by '51 he was selling leather finishes to shoe factories and tanneries. Three years later it seems he was hawking "clear glass" to taverns. 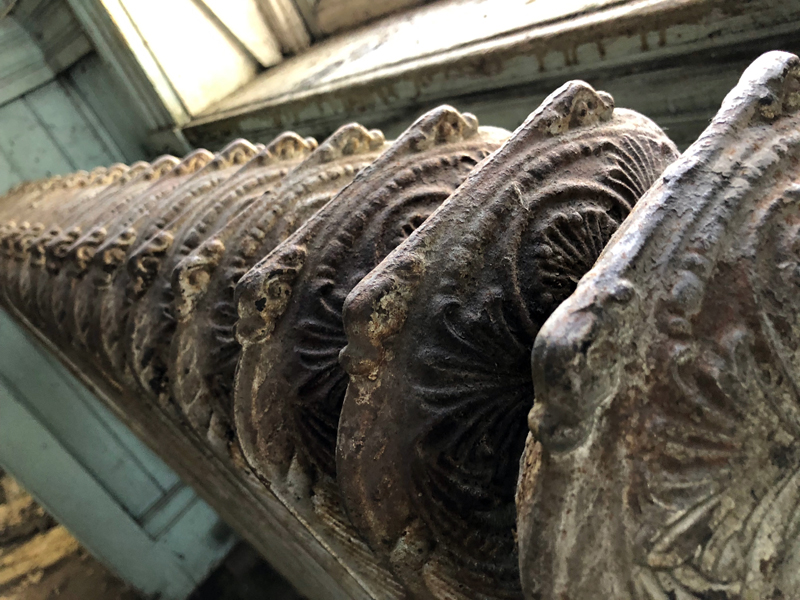 Also in '49, Riesen pulled a permit to demolish the dormers that once dotted that mansard roof, which he also replaced. Four years later, he demolished the former service station office building that sat just east of the building.

Riesen was still the owner when Crest Engineering, a tool and dye shop, replaced the chemical business on the first floor, though Riesen either continued or jump-started the chemical company, too, because in 1964 it's again listed there as a door to door vendor of cleaning products. 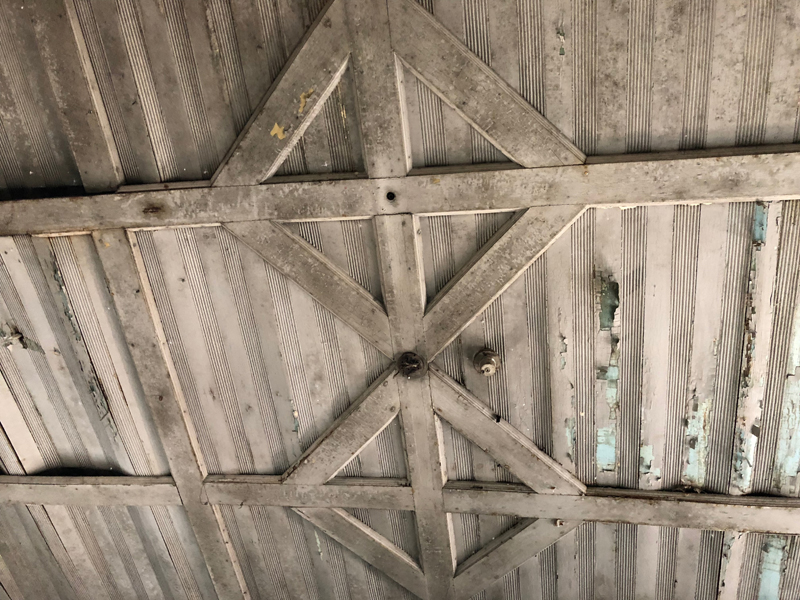 But the building continued to house multiple businesses, like Baumeister and Associates, a painting contractor that had an office on the first floor and stored "flammable liquids" on the second floor in 1960. And the A OK Box Manufacturing company that made corrugated boxes on the first floor in the former tool and die shop in 1962. And the B. Holtz Broom Co., which made brooms in 1964 on part of the second floor that had been sitting vacant. And the Herman Treichel Machinery machine shop in '65.

Interestingly, in 1967, the building hosted a trio of events – including one on education that was sponsored by Waldorf-School Teacher Training – called the Anthropological Conference. In the mid-1970s, more such events were hosted, including a talk by a former NYC Commissioner of Mental Health and others by The London Eurythmy Group, which had connections to Waldorf education, too. 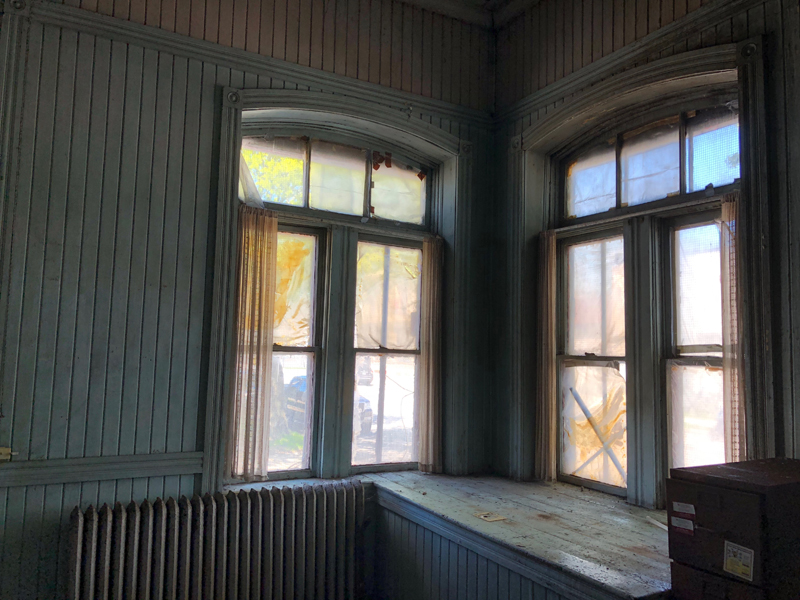 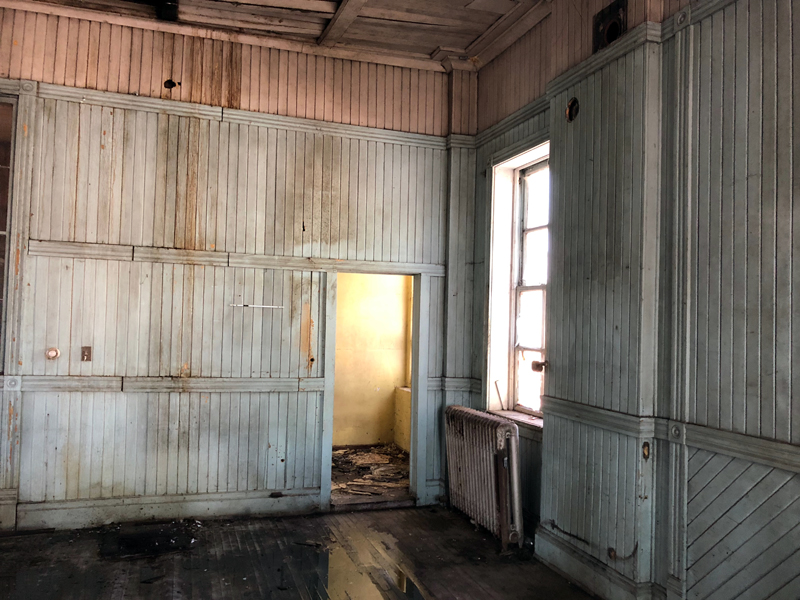 Eurythmic dance is a type of movement that has been described as a physical expression of speech.

These must have been interests of the unnamed resident of the building when it was described as a "dwelling" in 1971. Around the same time, a similarly anonymous advertiser offered letterpress printing equipment for sale in classified ads and offered first floor space for rent in 1974.

Presumably the same person described in 1978 – again without a name – as "a resident at the address, reputedly a cult member, was charged with conspiring to pass a forged money order, along with a handful of other cult members." 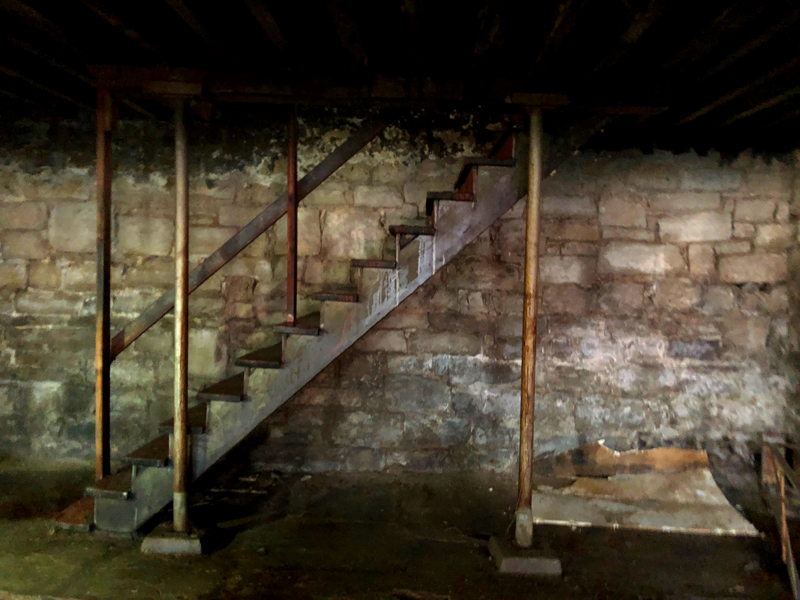 Perhaps Riesen was interested in eurythmy, because in 2001, he was still the building's owner and sought an occupancy permit there for Riesen Chemical and for the "processing of cleaning liquids in the basement."

In more recent years, says Prabhu, an artist was squatting in the space, which he says was full of stuff that needed to be cleared out.

Recent plans by former owner Jeffrey Koenig – who didn't own the place very long – for a restaurant, speakeasy and event facility never materialized.

Inside, the space is something of a blank slate. There are basically no interior walls on any floor except the first, where there are remnants of a couple offices on the west end of the building, near the entrance.

The foyer and these rooms all have interesting woodwork, which, if not original, looks pretty darn old. 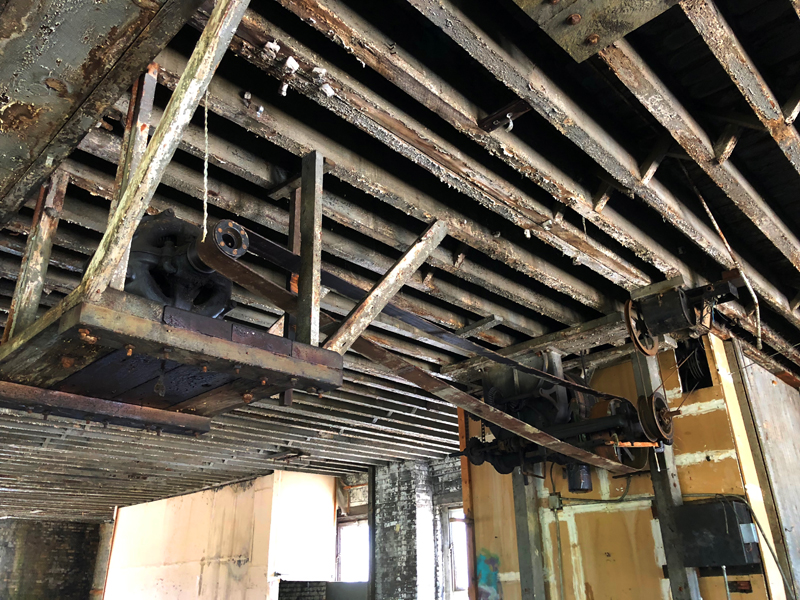 There's also an elevator that appears to have been retrofitted – again not anytime recently – into the southwest corner of the building. The machinery that runs the elevator hangs out in the open from the second floor ceiling. 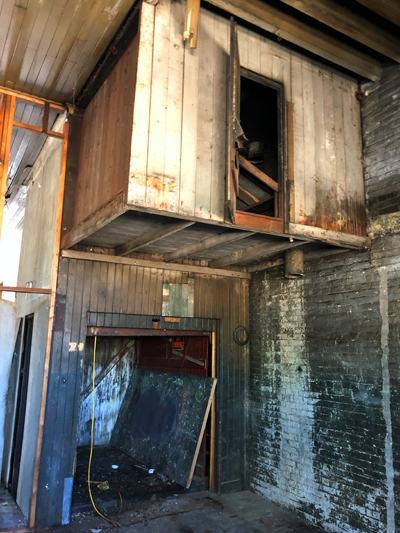 There's a long ladder on the third floor that leads up to a scuttle, which, if you pop it open, offers you a glimpse at the rooftop view. When Prabhu adds two floors here, it's clear that some of the rooms of the hotel will offer nice Downtown panoramas. 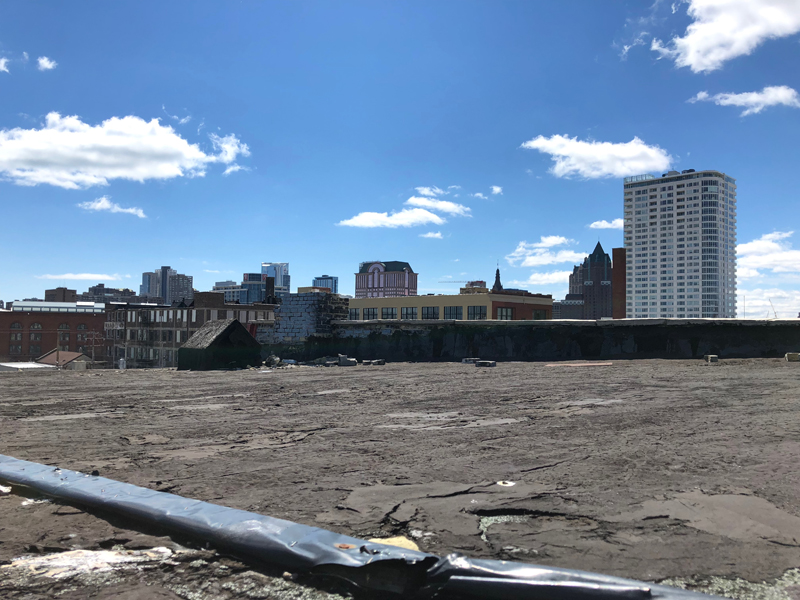 The location is a pretty great one, too, these days, with Haymarket on the rise. Next door, the former National Ace Hardware is about to undergo transformation. To the north, Dead Bird Brewing is expected to open soon and, of course, King Drive continues to add businesses.

A block south, you may have heard, there's a new arena and live block.

"I'm excited about the neighborhood," says Prabhu. "I think it's a great place to be. When I opened the Days Inn I saw a need for a budget priced hotel and since we opened so many places at that level have closed that 10 years later I think it's even more true."

Prabhu says the new hotel will be priced higher than his Days Inn, but still below other nearby properties, like the Aloft and Hyatt Place.

"We intend to position it as a mid-scale property," he says, "between the economy and luxury categories."

Don't think, however, that this project is something you might not see for a while.

Prabhu says it will open, "hopefully before next summer. In time for the summer season. Ideally, it will open June 1. We're building a hotel in Madison and the people (building it) have experience converting a building. I'm going to have them come over here and take a look at it and see what he can do for us and how quickly he can do it for us.