The Wind Point peninsula just north of Racine doesn't look that pronounced, though it is quite recognizable even on a not-so-detailed map of Lake Michigan.

But when you watch the tour video at the Wind Point Lighthouse, 4725 Lighthouse Dr., showing how the spit of land blocked the view from the north of Racine's lights – plus numerous unexpected underwater hazards – the need for the tower become quite clear. 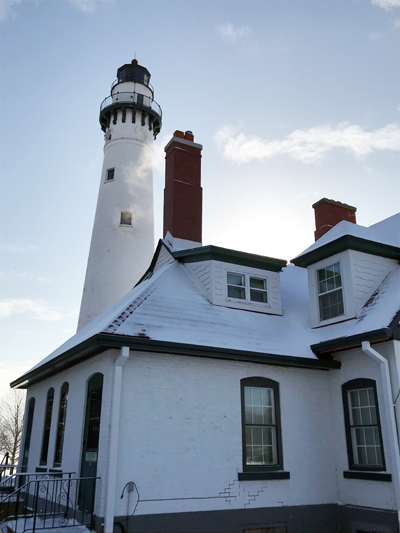 Today, even after many Lake Michigan lighthouses have gone dark (including the North Point Lighthouse), the need for Wind Point's glow remains important. These days, the lighthouse serves another purpose, too.

Owned by the Village of Wind Point since 1964, the former keepers' quarters house the Village Hall and the local police department, and the grounds are a popular park destination for residents and visitors, who also, of course, are eager to scale the tower's 144 swirling iron steps to the top.

The lighthouse – which was listed on the National Register of Historic Places in 1984 – is open seasonally for regular tours, but groups can also arrange tours in the off-season. Details are at the lighthouse web site, or by calling (262) 639-3777. 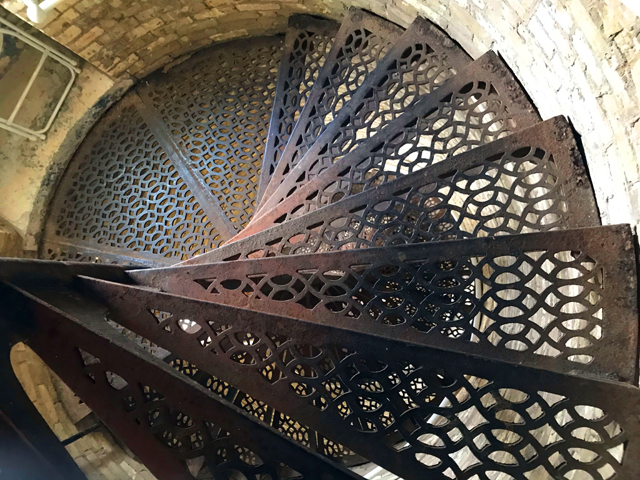 The slender lighthouse tapers slowly the top creating a pleasing design and has a cluster of keepers' quarters at the bottom, attached to the tower by a heavy ship-style door that leads to a brick arch. 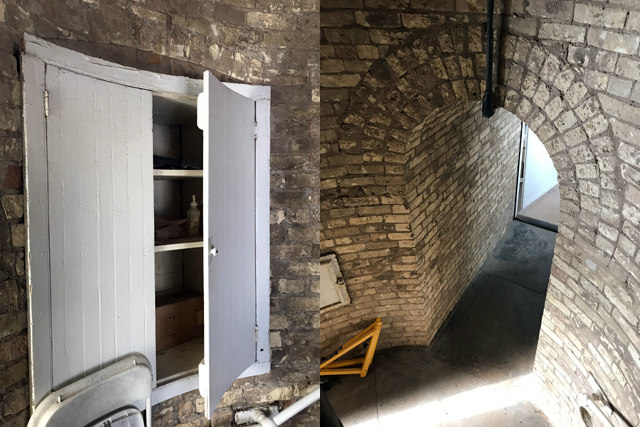 The quarters were originally designed to house the keeper and his family and two assistants and their families, too. Now, openings have been created to connect all three.

As the tour video says, while we often imagine the solitary life of the dedicated lighthouse keeper, this was not the case at Wind Point where three families lived together.

From 1880 until 1964, seven served as head keepers and there were more than 30 assistants.

The complex was designed by Orlando Metcalfe Poe, who served in the Civil War as a U.S. Army officer and engineer, taking part in Sherman's famous March to the Sea. 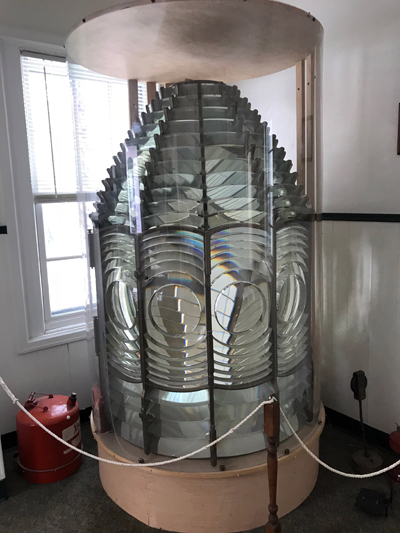 After the war, he was tasked with building many of the Great Lakes lighthouses, as well as the lock that bears his name at Soo Locks, connecting Lakes Huron and Superior.

The 108-foot lighthouse is one of the tallest, but also one of the oldest still-active lights on the Great Lakes.

The light was originally lit by kerosene and had a huge six-foot Fresnel lens to amplify the light. That lens, which was removed in 1964 when the light was automated, is on display in the Village Hall at the foot of the tower. One marvels at how such an intricate, yet hulking, piece of glass was designed and executed in 1880.

A few dozen yards away from the lighthouse are two smaller, yet distinctive structures. The fuel house, with its stepped gable, was erected in 1910 to store kerosene at a safe distance from the light and the living quarters. 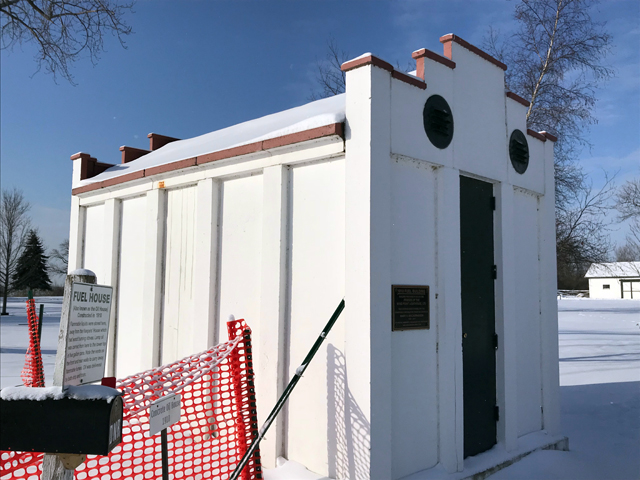 Across a small lawn is the fog horn house, built in 1900 to house a powerful warning signal. Be sure to go around to the east (lake) side of this little building to see the two protruding horns that would blast its warning out over the water. 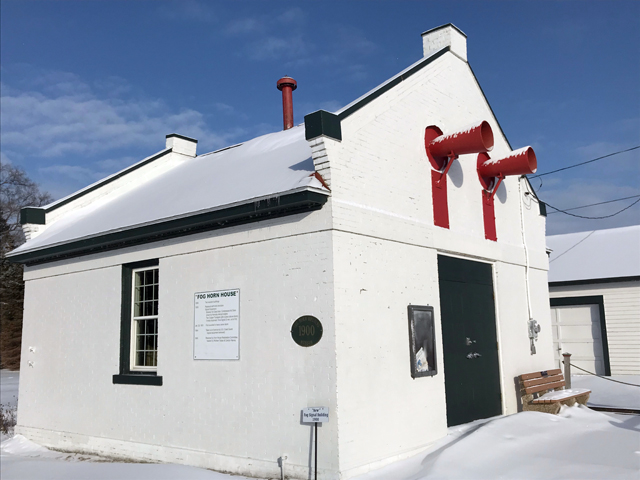 The quarters themselves have been renovated and altered over the years and so there's not a ton of original detail left, though there is some. If you look closely, in one spot, passing through a doorway cut into a thick wall that separated two distinct housing units, you can spy remnants of a staircase that was removed.

But the lighthouse itself, executed in cream city brick, is a real gem.

Passing through that metal ship-style door, you're confronted with that arched brick passage of roughly 6-8 feet and then you're inside the shaft, with the cast-iron circular staircase twirling its way up above your head.

Stop here to look into one of the openings into the space between the interior and exterior walls. This space was used as a mechanicals chase. 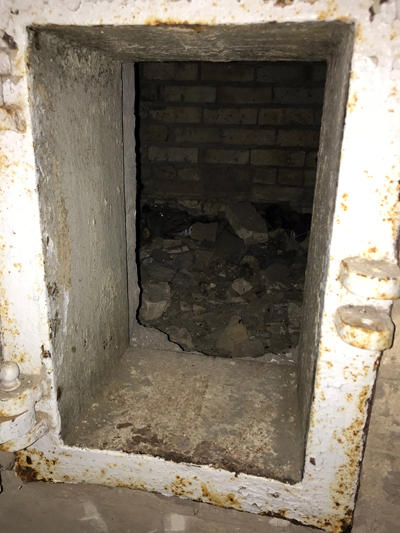 Access openings can be found all the way up the tower and by checking them as you climb, you can see how the space narrows, of course, as it rises toward the top.

Aesthetically speaking, the interior of the lighthouse is quite pleasing, with the preserved cream city brick, arched window recesses on a number of levels (the old porthole-style windows were replaced as part of a $210,000 renovation in 2007, that also included tuckpointing and painting) and the absolutely gorgeous stairs.

Along the way there's also a built-in wooden cupboard with curved doors to follow the contour of the tower. (There's a photo further up in the story.)

And folks who fear heights have nothing to worry about here because the design of the staircase prevents a clear view up or down. You won't get a vertigo-inducing view as you head up.

Clamber through a hatch and you'll find a door that opens to the outside. Here you'll get a great view out over the lake and over the parklike grounds below. This one, of course, is not for the faint of heart. 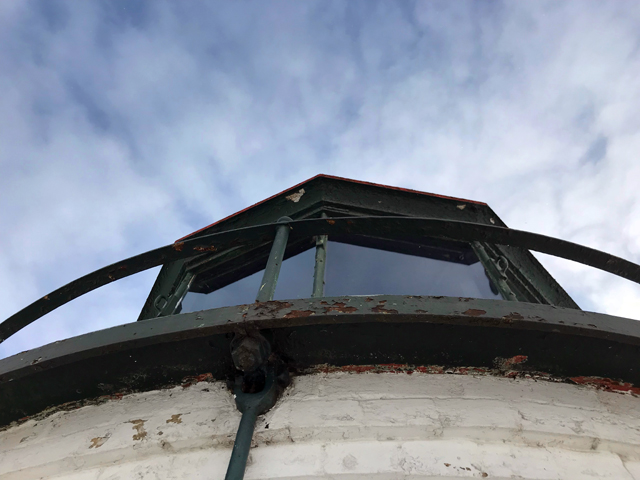 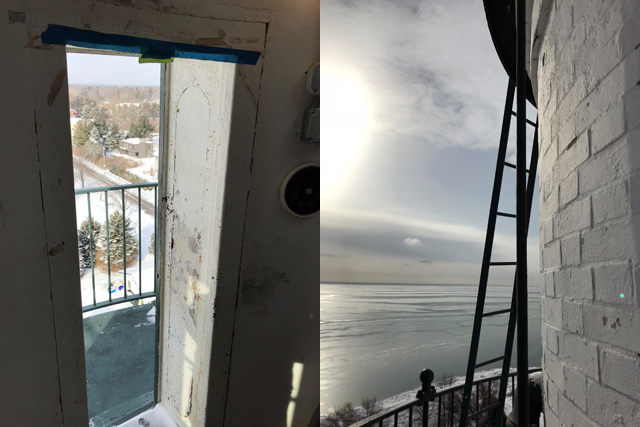 Back inside, climb a small, gently curving ladder and you can pop your head up through another hatch into the cramped area where the light is still spinning today. There's not really enough room to get into this space and, anyway, they don't want you there. 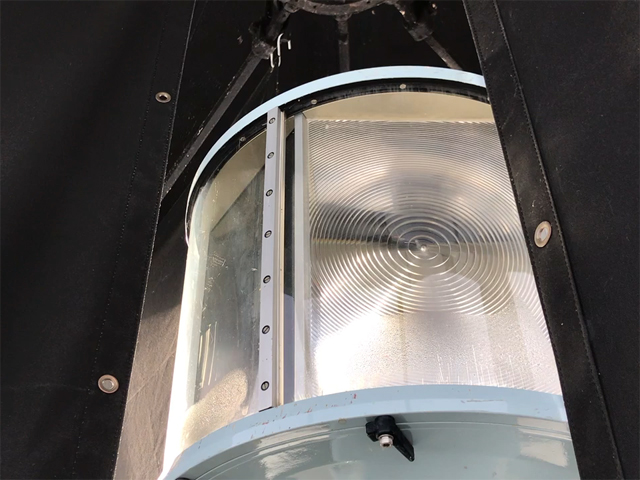 Back downstairs, I chat with Joe Huser, who with his wife Mary Ann, serves as the current caretaker of the lighthouse.

Huser also helps maintain the facilities at The Pabst and Riverside Theaters and Turner Hall Ballroom. The couple has been the lighthouse's "Ambassador Family" since October. It's a two-year deal that finds the Husers living on-site, maintaining the tower and coordinating tours.

"There were nearly 100 applicants," says Huser. "I think they liked that I could do a lot of the maintenance work myself."

Just from chatting, you can tell that the Husers are conscious of being wise with the village's funds, doing as much work as possible themselves and considering even the smallest money-saving details, like switching out energy guzzling incandescent exterior lights with LEDs.

Next on the Husers' agenda is paint.

"This was last painted 10 years ago and as you can see it's in dire need of it now," says Huser. 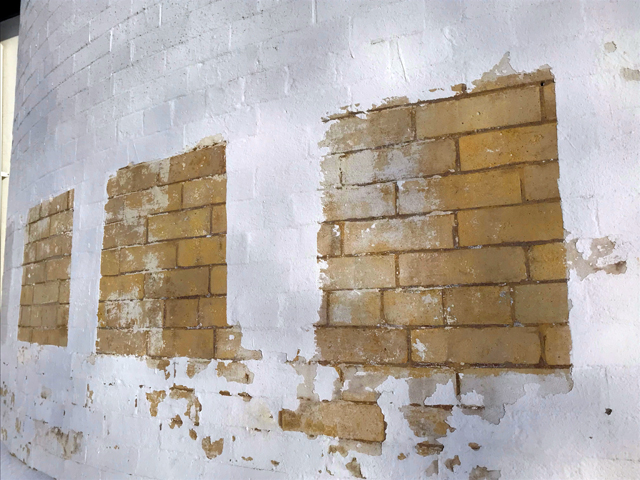 When I note that there are three squares outside where the paint has been removed, Huser says those are test areas to see how the tower would look unpainted.

"I'd love to take off the paint," Huser says, "but everybody says once you've painted cream city brick, you have to keep it painted. Because of the cost.

"The lighthouse is a financial burden on the village," he adds. "Our goal is to balance that budget."