9 impressive moments from the Packers' impressive win over the Raiders

After weeks of nail-biting finishes and tense games that felt closer than they really were, the Packers didn't bother much with dramatics on Sunday, crushing the Oakland Raiders at Lambeau Field, 42-24, and putting in the closest thing to a complete performance we've seen this season.

Sure, the defense wasn't as stout as it's been earlier this season, but finally Aaron Rodgers looked like vintage Aaron Rodgers and the revamped offense we'd heard about and anticipated since the head coaching move truly made its 2019-20 debut. Maybe it was just playing the Oakland Raiders, who are improving but are still rough around the edges (not to mention woefully injured on offense). Or maybe the NFC needs to start getting scared that the Packers are starting to put it all together.

Here are our nine favorite moments from yesterday's big win over the Raiders. 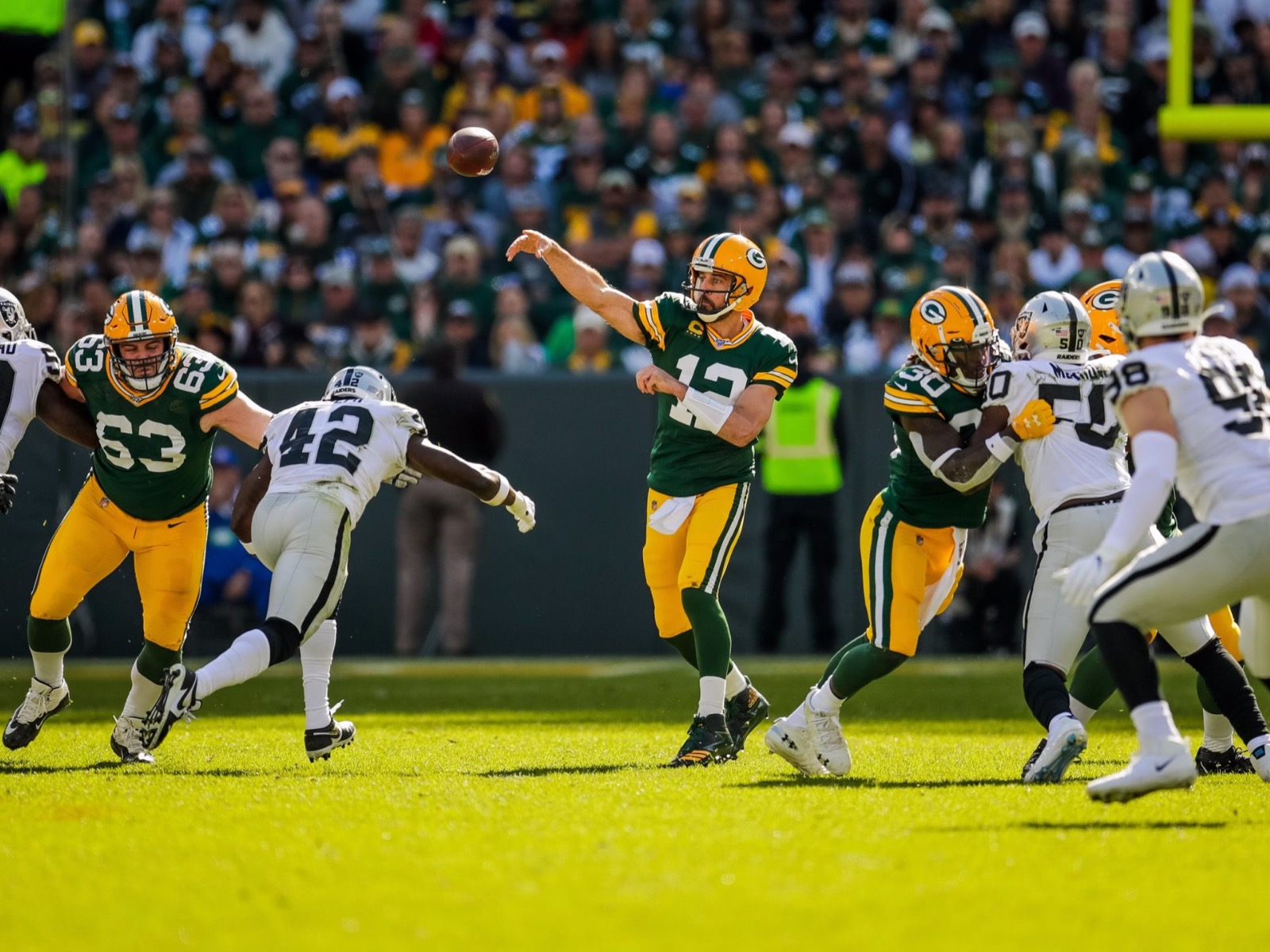 The storyline coming into Sunday's game was that Aaron Rodgers wasn't the same as in past seasons. The injuries and age were catching up to him. He was on the backslide of his career, and it was going to be the defense and the resurgent running game that would have to win contests for the Packers this season.

Whoops! Gonna have to find some new hot takes everyone!

Aaron Rodgers was perfection on Sunday – maybe not literally, as he did miss six passes (I know, what an off day) but according to QBR, he was, nabbing a pristine 158.3 rating, throwing for five touchdowns, running for a sixth to help the Packers put away the Raiders and almost certainly single-handedly winning most people their fantasy football games yesterday. Rodgers was always going to figure out LaFleur's offense and begin gelling with the system sooner than later; I don't think anyone expecting it was going to come with Davante Adams still on the bench and against an improving Oakland team, but #12 is clearly full of surprises – even this deep into his career.

2. The fumble that flipped the game

DEREK CARR, HAVE YOU LEARNED NOTHING? pic.twitter.com/p86kOMi1Yn

There was a brief time during this game when things actually weren't looking too good for the Packers. Near the end of the first half, the Raiders were driving, reaching the redzone while down, 14-10, and ready to take the lead.

Then Derek Carr decided to get the touchdown for himself – no matter what. And the "what" in that sentence turned out to be "fumbling the football into the endzone, which becomes a touchback" – his second time botching seven points by bumbling the football out of bounds in the clutch, making this growingly his signature move.

The play ended up being massive, handing the potentially lead-taking drive over to Green Bay, who then proceeded to score a touchdown of their own before the half and went into the break up 11 instead of down four. And obviously things only escalated from there, as the floodgates opened and Aaron Rodgers just Aaron Rodgers-ed all over the second half.

In conclusion, maybe two hands on the football next time, Derek.

3. See, this is how you scramble into the endzone

Take notes, Derek. Actually, don't – I want the comedy of getting to see Nathan Peterman play football again, so get benched, please.

4. The legend of Jake Kumerow 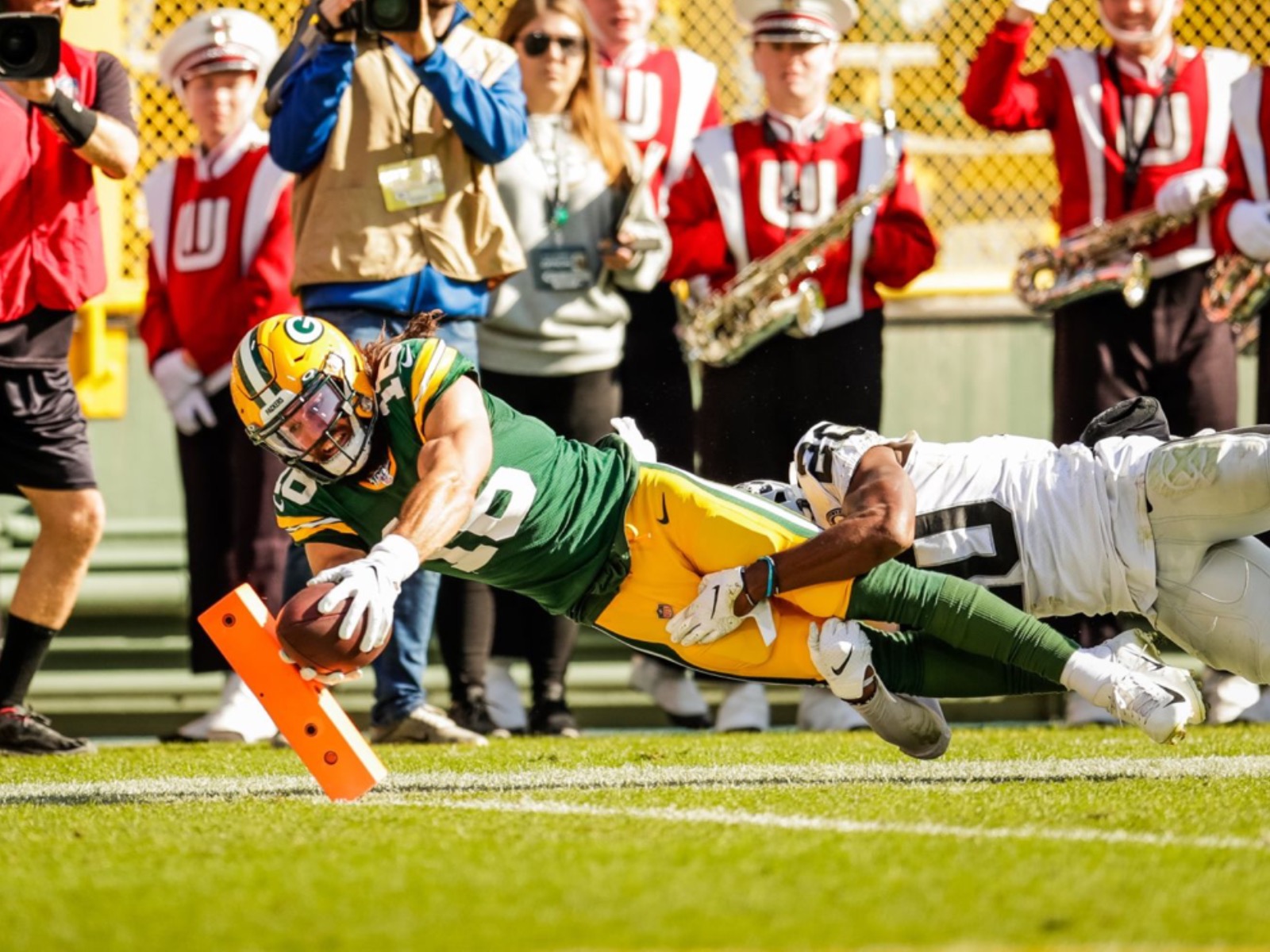 With Davante Adams still nursing his turf toe and both Geronimo Allison and Marquez Valdes-Scantling playing with injury restrictions, somebody was going to have to step up. Obviously that ended up being Aaron Rodgers – but the entire receiving core stepped up as well, from last week's savior Allen Lazard to the running backs to the resurrected corpse of Jimmy Graham and fan favorite backup receiver Jake Kumerow, who caught this pass, tip-toed the sideline and gave the pile-on a little love tap with the football to score his first touchdown of the season on just his sixth catch. And with that, he now has two times as many touchdowns as Jared Abbrederis.

5. The other big goal line play 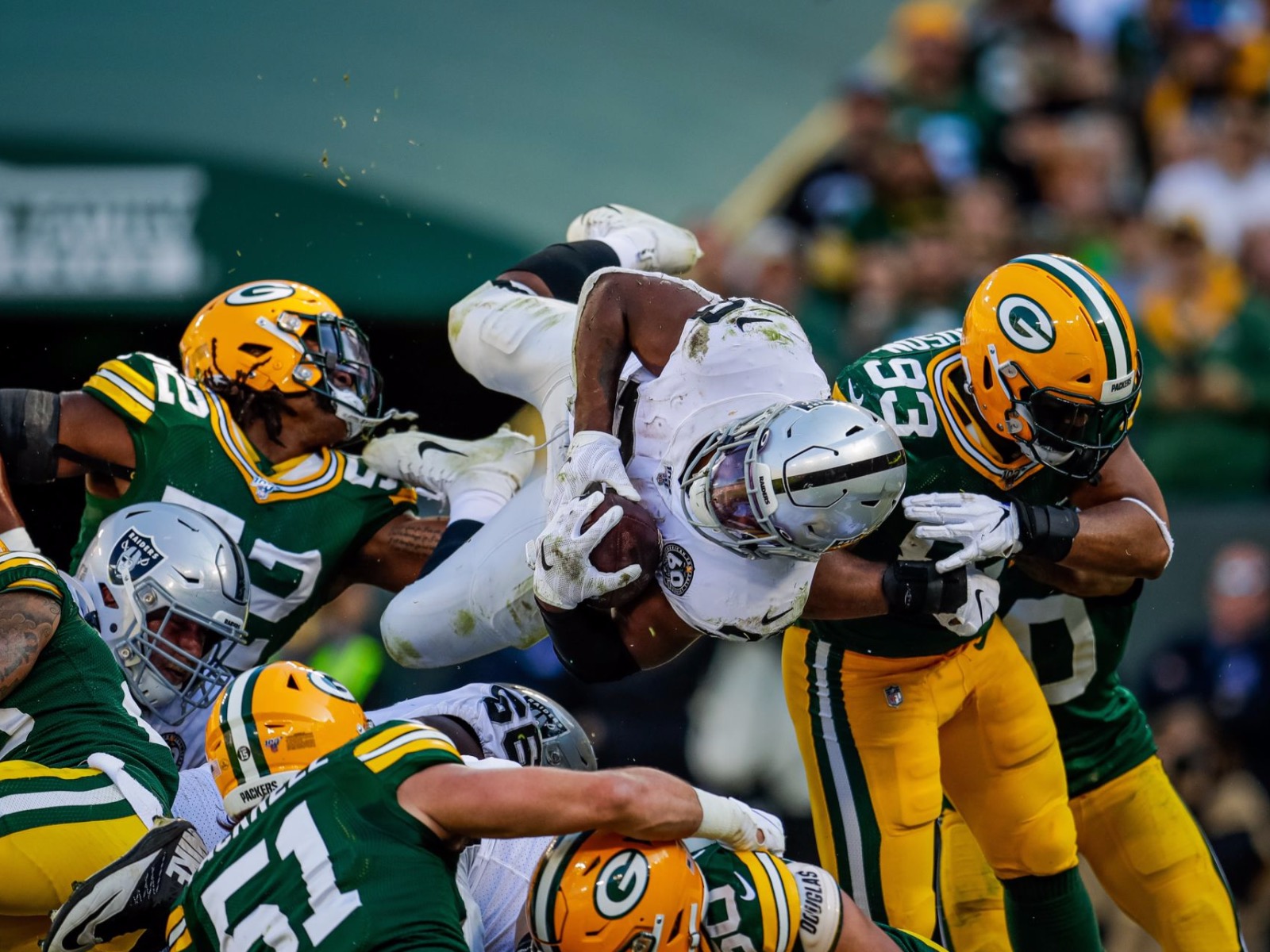 Carr's fumble obviously gets all of the attention as a key turning point in Sunday's game, but let's not forget this key third-quarter stop as well as the Packers defense turned into a brick wall at just the right time to stop the Raiders from getting into the endzone. The fourth down hold, in particular, was impressive, with Jacobs taking to the air but getting spun mid-flight, causing the ball to come just centimeters short of breaking the plane (and causing my fantasy football team to not score six points).

I'm not even mad, though, as a score would've brought things to just a two-possession lead in the third quarter, potentially shifting the energy and momentum of the game. Plus, helicoptering dudes just looks cool. If I'm going to miss out on fantasy points, at least give me some impressive aesthetics.

Here is your D Train! What a game tonight! #OAKvsGB #GoPackGo

Just when I was starting to get tired of the group photo celebrations, the Packers defense mixed it up.

A week of discussion about sack celebrations turned out to be a waste of time as the Packers failed to record a sack on Sunday. That being said, the defense still found a way to celebrate as the team busted out their new dance – the D Train – after picking off Derek Carr in the endzone and maintaining their comfortable lead. And it is the best.

Admittedly, the defense didn't have their finest game on Sunday; they technically gave up more yards (484) than the Raiders, and if Carr hadn't flung the football out of bounds on his scramble to the endzone, we'd probably have seen a very different game. It was a throwback to Green Bay's "bend don't break" style of defense – but thankfully, it was far more bend than break against Oakland. I would say that they better shape up for next week's battle against the Kansas City Chiefs, but considering they'll be facing Matt Moore as Patrick Mahomes recovers from his dislocated knee cap (ouch), maybe, like yesterday, top form won't be as necessary.

Then again, ask the Wisconsin Badgers about underrating their opponent ...

No, seriously, this seemed far too easy. Not that I'm complaining – nor is MVS, I'm sure, who caught just two balls but still led the team in receiving with 133 yards and this touchdown. Is a 66.5 yards per catch average good?

The 2019-20 Green Bay Packers, continuing their tradition of not only winning football games but having a whole lot of fun doing it as well. I can remember a lot of good Green Bay teams in my lifetime, but I have a hard time recalling one that's this much of a joy to watch.

9. Just look at how much these two hate each other

Coach LaFleur gave @AaronRodgers12 the game ball after he posted a perfect passer rating & 6 total TDs in the win over the Raiders! #OAKvsGB | #GoPackGo pic.twitter.com/1PHimqOrUU

I'm not body language expert – but clearly these two men despise one another and the Packers will break apart any minute now, as all the sports talk stations and hot takers promised that it would. Oh, by the way, the rest of the new coaches for 2019-20 currently have a combined record of 10-34-1. This Matt LaFleur kid might just be working out ...