Another week, another closer-than-necessary-but-a-win-is-a-win result for the Packers as Green Bay once again used a fast start and their impressively stout defense to keep the Denver Broncos at bay long enough to snag a 27-16 win.

The offense once again didn't quite look consistent – we still haven't seen four quarters of great football from the Packers this season – but the defense put on yet another show. And plus, it doesn't need to look good; it just needs to look like Green Bay has more points than their opponents on the scoreboard at the end of the fourth quarter – and so far, the Packers have done that three out of three times, including twice in the division.

If you want to see something that looks good, however, check out these photos and videos from the Packers' victory Sunday afternoon. 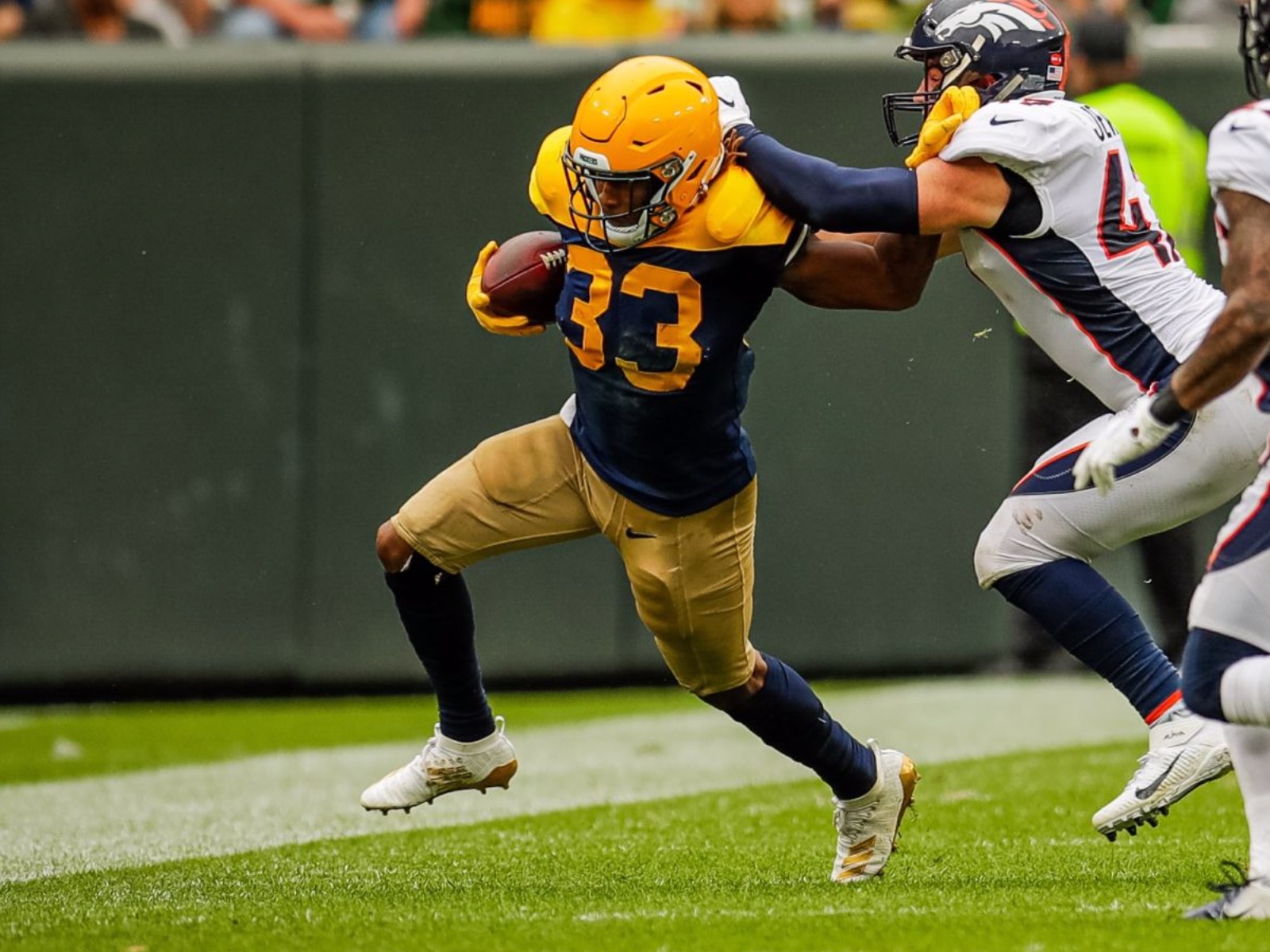 For the fifth consecutive year, the Packers ditched the green and gold for a game and went with the blue and gold, a throwback to the team's uniforms back in the 1937-48 era of the ACME Packers. Hey, anything that's not the Pittsburgh Steelers prison break bumblebee look or the Jacksonville Jaguars mustard mudslide jerseys is fine by me.

For the past few years, the plays we've most recognized as "Aaron Rodgers plays" include holding one's arm gingerly post-breaking one's collarbone, holding the ball for five years in the pocket as you wait for a receiver to get open and glaring frustratedly at the sideline at Mike McCarthy after yet another three-and-out. But Sunday, Aaron reminded us of his true signature play: drawing the defense offside with the hard count, snagging a free play and dropping a perfectly thrown bomb to a receiver for a touchdown. It's been too long since we've seen an excellently performed Rodgers Special. 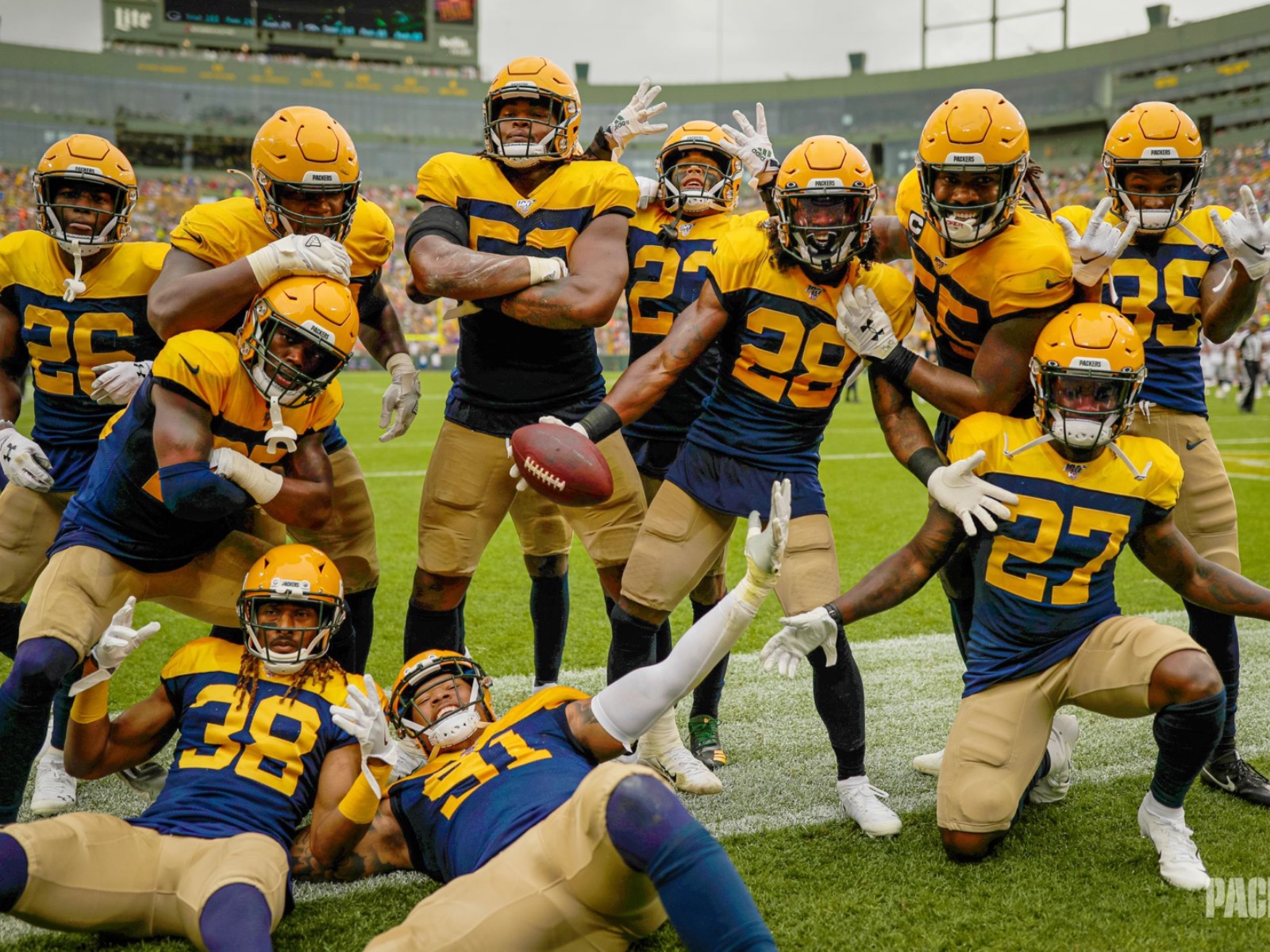 Another win, another batch of team photos from the Green Bay Packers defense after an awesome turnover. I'll never really tire of these celebrations – partly because the Green Bay defense has had so little to be happy about over the past few years – but I think we should start mixing up these poses next week. I say next week after a big turnover, the defense does some awkward prom photo poses in the endzone – or maybe some uncomfortably formal and stiff family photo posturing after a big play. The options are really endless here; looking forward to seeing everyone's creativity on Thursday night.

It may not be as iconic as BJ Raji's shuffle dance the endzone back in 2011, or Clay Matthews sack celebration, or Gilbert Brown's Grave Digger – but I look forward to seeing Za'Darius Smith crawl to a bowl of something and then shovel some imaginary food into his face a lot this season. What do we think he's eating in this celebration? I bet it's a bowl of cereal – maybe Cookie Crisp. I miss Cookie Crisp. Great, now I'm definitely making an impromptu grocery store run after writing this article exclusively to get a box of Cookie Crisp and some milk.

So here's something weird and unexpected: Most of the highlights and memorable moments from this young Packers season ... have come from the defense. They're the ones making the fun, crazy, game-changing plays. They're the ones busting out the fun celebrations. They're the ones, honestly, winning these early games while the offense still works the kinks out. As a Packers fan, I'm very confused. I'm so used to dreading every moment the defense steps onto the field, hoping and praying for "bend, don't break." And here we are getting timely stops and turnovers and getting the job done when the offense can't. THAT'S THE OPPOSITE OF WHAT I'M USED TO! But I'm very excited to get used to stuff like Jaire Alexander literally snatching the ball out of our opponents hands.

6. GIVE VITALE THE TOUCHDOWN!

Danny Vitale has turned into a mild cult hero for the Green Bay Packers – whether it's because he plays the under-appreciated position of fullback, his mustache or his just generally excitable personality. He's definitely not loved for his massive production; after all, he's yet to score a touchdown during his career. But that almost changed today as Vitale caught a perfect pass from Aaron Rodgers and came JUST a few inches short of his first NFL touchdown.

In a just world, the next play would've been a fullback dive for Vitale ... but instead the Packers, after an incomplete pass to Marques Valdes-Scantling, handed the ball off to Aaron Jones who finished the drive up with a touchdown. Welp, there's always next time.

The Packers and Brewers brought a chugging competition to Fiserv Forum during the Bucks' playoff run last season, so it only seems fair that Milwaukee would return the favor by having point guard George Hill shotgun a beer on the big screen at Lambeau Field. Next move? I nominate Giannis does a smoothie beer bong at Miller Park if the Brewers make the playoffs.

The @Packers actually did a Slip 'N Slide celebration 😂😂😂 pic.twitter.com/hbNQKoCjhm

Warning, Bernie Brewer; there's a new slide-related celebration in Wisconsin. After yet another massive defensive play to hold the Broncos at arms length, the Green Bay D decided they'd had enough of the formal team photos and went with something a little more active: turning Lambeau Field into a Slip 'N Slide. Points docked for Adrian Amos' (#31) not quite smooth dismount.

9. Rubbing off on others

@AaronRodgers12 has the most unusual hand warmer in the #nfl @packers pic.twitter.com/1RyAecg6a6

I've heard of rubbing Buddha's belly for good luck, but I guess this is the Green Bay variation on that: Rodgers giving a sideline coach's bald noggin a vigorous pat down. Hey, we're 3-0 – and as the PG-13 version of the famous quote from "Bull Durham" says, don't mess with a winning streak. So I better see this happening again Thursday night back at Lambeau when the Pack plays the Philadelphia Eagles.