The MUBB Shake Shack promotion might be the best thing ever

Picture this: you're at Fiserv Forum, sporting your best blue and gold apparel. There's ten minutes left in the game. Your No. 10 Marquette Golden Eagles are up by 15 (obviously), and a blocking foul has just been called on your team. After briefly booing the refs, the opponent heads to the free throw line. He's got two shots. Is this his chance to decrease our lead?

It is his chance to win free shakes for the entire arena.

This season is a huge breath of fresh air for Marquette fans, for many reasons. A solid team offensively AND defensively, currently second in the Big East, with a serious chance to go far in the tournament come March. We have the blessing that is Markus Howard, the SPASH bros, Theo John, Sacar Anim, and all the other talent coming off the bench. Not to mention, a beautiful new arena, and with this new arena came the Shout for Shake Shack promotion.

For those unfamiliar, here's how it works. After there are only ten minutes remaining in the second half, any time the opposing team misses two free throws in a row, the whole crowd gets a free shake (with a purchase), courtesy of Shake Shack. 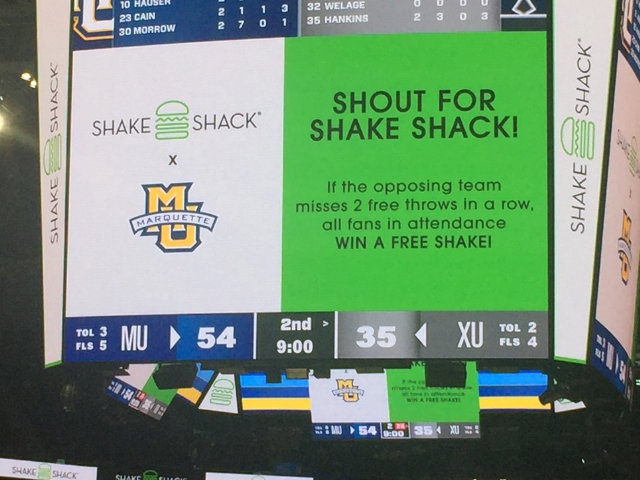 I have been a season ticket holder all four years at Marquette, and I have heard the crowds get pretty loud in the Fiserv Forum and the Bradley Center.

But when that second free throw hits the back of the rim and bounces off, Marquette fans erupt into a roar of happy humanity that is simply unmatched.

There is no better way to celebrate a Marquette win than to wait in line at Shake Shack for 30 minutes for that shake that was so hard earned by the other team's lack of success at the free throw line.

MUBB, we thank you for the Al McGuire years, the Dwyane Wade legacy, Markus' 53 point game, and all of the great moments in basketball as part of this tradition.

And we thank you for the Shake Shack promotion.

It is the best thing to happen to Marquette basketball fans that has absolutely nothing to do with basketball - well, except for missing a few free throws.

Where to celebrate National Marquette Day in Milwaukee