For some, the thought of standing completely still for very long periods of time without flinching, blinking or moving a muscle – while covered in body makeup and a thick costume – sounds like torment. But for Alice Wilson, it's just another day in her job as a living statue.

Wilson has performed every day of Summerfest as a completely-still, tarnished-bronze cowgirl, pirate, golfer, mermaid and many other characters in various high-traffic areas of the Big Gig. She says she enjoys the challenge of the work. She admits this year, however, has been particularly challenging.

"This year has been rough with the stretch of hot weather – I've been sweating buckets – but I still really love doing this," says Wilson. 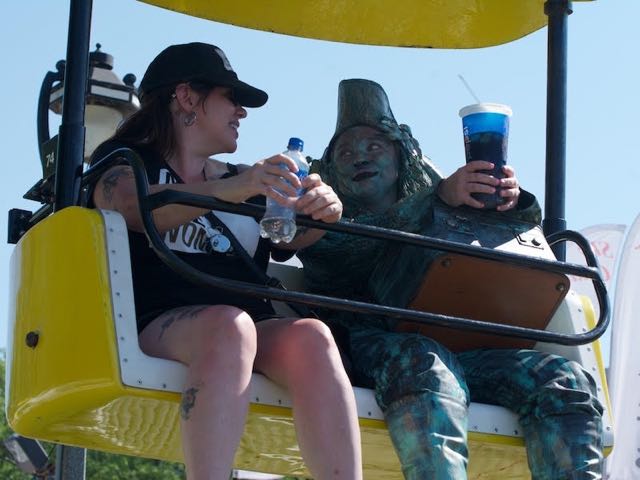 Wilson says the money she makes in tips is also well worth the time she spends at Summerfest, although occasionally she has to deal with rude festgoers.

Wilson was drawn to the living statue life after years of art modeling at both UWM, where she received a degree in theater performance and at MIAD. The two gigs require very similar skills – art modeling requires far less in the way of makeup and attire. Getting into character for a living statue gig can take 90 minutes or more, whereas preparing for an art modeling gig takes, well, maybe 30 seconds to disrobe.

"I've been art modeling for about 14 years and I absolutely love it," she says.

Wilson started out as a living painting of the Mona Lisa and later a human statue of Willy Wonka before she chose her cowgirl and pirate personas. She researched living statues on the internet and realized they were particularly popular in New Orleans and Europe – so she and a friend traveled to Scotland and performed at Edinburgh's Royal Mile.

"It was amaaaazing," she says.

Next month, Wilson will return to her home state of Indiana – she is originally from Marion – and will perform in the Indy Fringe Festival. This is particularly meaningful to her because it's her first time performing as a human statue in the state where she grew up and also because the very first Fringe Festival was in Edinburgh.

"It's something I always wanted to try," says Hackett. 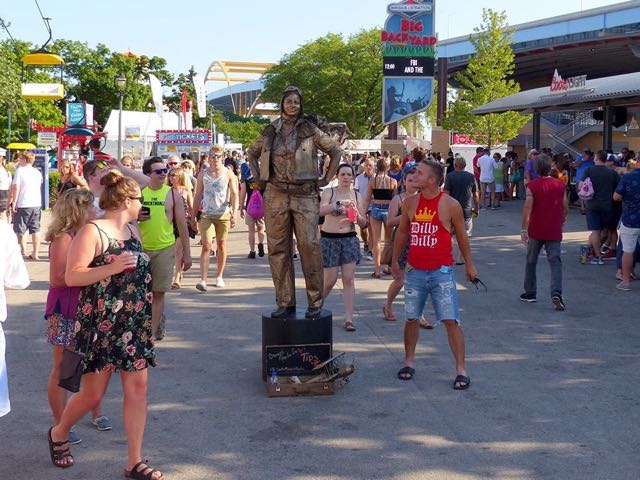 Look for these living statues at festivals all summer long – and tip them well.