Edgar Winter on playing with his brother and creating "Frankenstein"

By Larry Widen, Special to OnMilwaukee

When Edgar Winter and his brother, Johnny, unleashed their brand of loud, Texas-based blues and rock 'n' roll on an unsuspecting public in the late 1960s, their striking appearance onstage combined with a distinctive sound made them a popular attraction in theaters and concert halls from coast to coast.

But after Johnny and Edgar performed at Woodstock in August 1969, both brothers became top national concert draws in bands of their own. First with Edgar Winter's White Trash and then the Edgar Winter Group, Edgar made music by fusing gospel, blues, jazz and soul before coming up with the mega-hit single "Frankenstein" in 1973.

Edgar Winter, who will perform at Summerfest's Harley-Davidson Roadhouse stage at 6 p.m. on July 1, spoke with OnMilwaukee about his musical influences, playing with his brother and other highlights of a 50-year career.

OnMilwaukee: How does a Beaumont, Texas household produce not one, but two highly acclaimed musicians?

Edgar Winter: Johnny and I grew up surrounded by music. My mother was an excellent classical pianist, and my earliest memory of music is being nestled in her lap, realizing that she was creating these beautiful sounds. The feeling I have about music is very much intertwined with feelings of family, love and security.

Our dad played the guitar and banjo for fun, and he was also the saxophone player in a swing band when he was younger. When Johnny was 7 and I was 4, my dad showed us our first chords on the ukulele. Johnny and I started playing old blues and folk songs, and we sang gospel music like "Do Lord" and "It Ain't Gonna Rain No More." We liked playing songs by the Everly Brothers and Buddy Holly too. We got good enough to be featured on a local radio program.

Listening to your first albums, I thought perhaps your family had attended one of the black churches in Beaumont.

Certainly the influence was there, but my mother was Baptist and my father was Episcopalian, so we went to a lot of different churches. The Baptist church music was closer to country, the Episcopal music was in the classical European style, and the black churches were really bluesy and full of gospel, yet it was all church music. The diversity was wonderful. When I got a little older, my friends and I used to sneak into the Pentecostal tent revivals because we loved the spontaneous, infectious energy of that music. You think rock and roll is wild? It pales in comparison to one of those old tent shows. I was trying to recapture that energy with my first band, White Trash. The whole screaming style of rock and roll came from Ray Charles, Jackie Wilson, Aretha Franklin, Sam Cooke and all the great, charismatic black gospel and preacher singers.

A lot of what you loved was called "race music" and, to a point, was marginalized by white America.

I remember when the old Nat King Cole Show was on television, but yes, much of the music made by black artists was suppressed. What helped break those barriers down was when white artists like Carl Perkins and Jerry Lee Lewis began copying people like Chuck Berry and Little Richard. Like Elvis doing "Hound Dog." To me, blues-based rock always had those two schools. The original black innovators, and then the rock and rollers. Two distinct influences. I loved it all, of course!

And very simply, it is. Record companies and radio stations have always viewed music as a product or a commodity and they want to package and sell it accordingly. They usually don't like it when an artist steps outside the line! Certainly Ray realized that when he did his first country album. A lot of people don't necessarily see it that way, but it's true.

How did the Winter brothers graduate from playing ukuleles to becoming albino rock stars?

(laughs) That's funny when you put it that way. There was a lot of ground in between! Johnny put down the ukulele and picked up a guitar when heard Muddy Waters, Lightnin' Hopkins and Howling Wolf. I learned to play the electric bass and piano so I could stay in his band! But Johnny had it all figured out when he was a teenager. He watched "American Bandstand" and read all the music magazines. With his black sunglasses and big pompadour, he'd even found a way to make being an albino cool!

We all have adversities to overcome. I realized I was different at an early age and I was lucky to have parents who really loved one another and stayed together. I knew lots of kids that didn't have that kind of home life. At our shows, Johnny would do a couple songs and then he would say, "I'm going to bring out my little brother, Edgar." I walked on stage and the audience was like, "Oh my God, there's two of them!" We did "Night Time is the Right Time" and "Tell the Truth," Stuff like that. I did all the high screams and sang the Margie Hendricks parts, and Johnny sang the Ray Charles parts. It was great.

There was a black nightclub in Beaumont called The Raven, and one night we went out to see B.B. King and Bobby Blue Bland. It was literally five white kids with 1,000 black people. B.B. invited Johnny to sit in with the band. He was 17 at the time and it meant so much to him, especially at such a young age.

It's pretty cool that you guys could feel so welcome in an all-black club.

People talk about how the South is so racially prejudiced, but there are worse places. I had a lot of black friends and formed a band with a black singer named Junior Cole. There were some places that we could play and some that we couldn't. There was a club with all-white patronage, but they would have only black bands there. They had this band that I loved, Big Sambo and the Houserockers. I wanted to sit in with them and the club owner wouldn't allow it. He said there's nothing wrong with a white audience and a black band, but if you were to get up there and sit in with this black band, a lot of our patrons might take exception to that. I was like 10 or 11 years old then. It just didn't make any sense.

It seems there was no sibling rivalry in the years before you each formed your own bands.

Never. Johnny was my hero and I was the weird kid who played all the instruments. I liked working with the band and showing everybody the parts. I never wanted to be the front man. I never wanted to sing. I just loved being around the music. Had it not been for Johnny, I probably would have gone into electronics or engineering.

You said earlier that playing at Woodstock changed your life.

That was in August 1969 and Johnny and I had been playing concerts all summer. We actually performed at a rock festival in a West Allis park two weeks before Woodstock! But when we went onstage at Woodstock, I just looked out at the sea of humanity and I realized that music had the power to affect people in positive ways, even if only for a short time. I already knew that, in order to reach any audience, the performer has to build a bridge that reaches out and connects with them, but all those people in one place and at one time made me think that I was just part of something bigger than all of us.

It was a few months afterwards that Johnny and I went our separate ways to make music. There was no animosity or anything. We both just knew it was time. His band was called Johnny Winter And, and mine was called White Trash.

"Frankenstein" is one of a handful of songs that defines the '70s.

I wrote that song back when I was playing with Johnny but I didn't ever think I'd come back to it with the Edgar Winter Group. The original riff was kind of bluesy and real simple so the band could just jam on it. It didn't even have a name. We took to calling it the double-drum song because of the drum solos in it.

I had forgotten all about the song until I saw the ARP 2600 synthesizer, a remote keyboard that was connected to the guts of the instrument by a cable. When I picked it up in the music store, I thought, "Hey, this thing is pretty light. If I put a strap on it, I could play it like a guitar." I started messing around on it with the old double-drum song and it began to sound really cool. So we worked it up as a live song for the shows, never intending to put it on an album. It was an instant sensation. I will never forget the first night I walked out onstage with that keyboard. It was a real rock and roll moment. 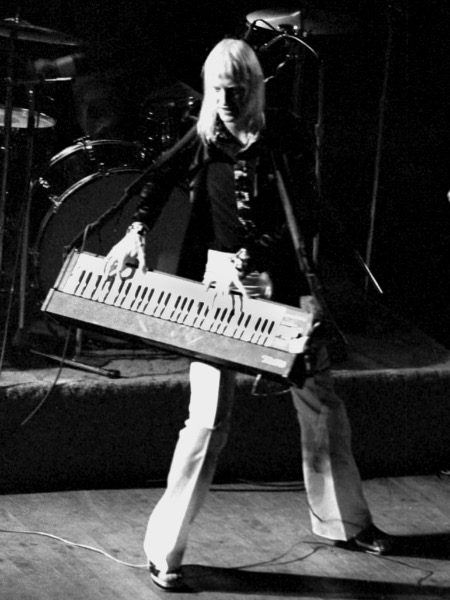 So what made you decide to record it?

We were in the studio doing "They Only Come Out at Night," and I thought "Free Ride" would be the obvious choice for the single. Rick Derringer, who was producing, suggested trying to mix an album cut of the double-drum song from the two or three 15-20 minute versions of it that we had. Back in those days, a band would actually create an album in the studio. The tape was always rolling so when we came in to work, it was one of our favorite songs to warm up to. Back then, the only way to edit anything was to physically cut the master tape with a razor blade and reassemble it with splicing tape.

We had this thing all over the control room draped over tables and chairs while we were trying to figure out how to put it back together. At one point, Chuck Ruff, the drummer, mused, "Wow man, it's like Frankenstein." I said, "That's the name of the song!" So the monster was born. It embodied the feeling of technology running amuck and out of control.

I wonder what your mom thought when she saw you stalking around onstage with the synthesizer keyboard slung around your neck?

(laughs) Heaven only knows. At the time everybody was trying to outdo David Bowie or Alice Cooper, and I was interested in creating the quintessential all-American rock and roll band. I think my mother thought the whole thing was pretty fascinating and she instinctively understood that musicians needed a certain degree of freedom. I know my parents were initially disappointed that I didn't pursue higher education. But when I graduated from high school, I immediately went to New York to make my first record.

What were your thoughts when Johnny passed away in 2014?

I always idolized him and really looked up to him. Not just as a musician, but being my older brother I thought he was really cool. I wanted to follow in his footsteps and make him proud of me. I was, and still am, sad that we'll never play together again, but that's part of life. I'm not afraid to die. Death is the great mystery and I don't pretend to know anything about it, but I'm not afraid of it.

My next project is a tribute album to my brother, and Joe Walsh, Billy Gibbons, Joe Bonamassa and Kenny Wayne Shepherd have agreed to participate. Keb' Mo' might be involved. There's a few more people I'm going to ask. That album should be out in about a year.