There's something that feels almost wrong watching The Black Keys in a fancy new arena – or any arena for that matter.

At their best, the Akron-born duo of Dan Auerbach and Patrick Carney deliver grimy, blues rock seemingly born to be played in a broken-down intimate bar, feet sticking to the floor from decades of spilled light beer.

But the band's own deserved growth into one of the genre's biggest names, plus the laws of supply and demand, forced The Black Keys' no-frills act into an arena rock mold, their muffled vocals, swampy guitar riffs and general lo-fi charms now for crowds of thousands in shiny massive venues threatening to swallow the band up – an actual problem in the past at the cavernous Bradley Center – or at the very least inspire some cognitive dissonance, like watching a grindhouse horror B-movie presented with the finest laser projection at the local cineplex.

The music always deserved to go big, but there's some part of this fan's brain that can't help wish they could tour little dive bars and hole-in-the-wall haunts forever.

But gosh, if I have to watch a rock band jam out excellently on a big stage in front of a crowd of head-bobbing, happy fans, I guess that'll do too. 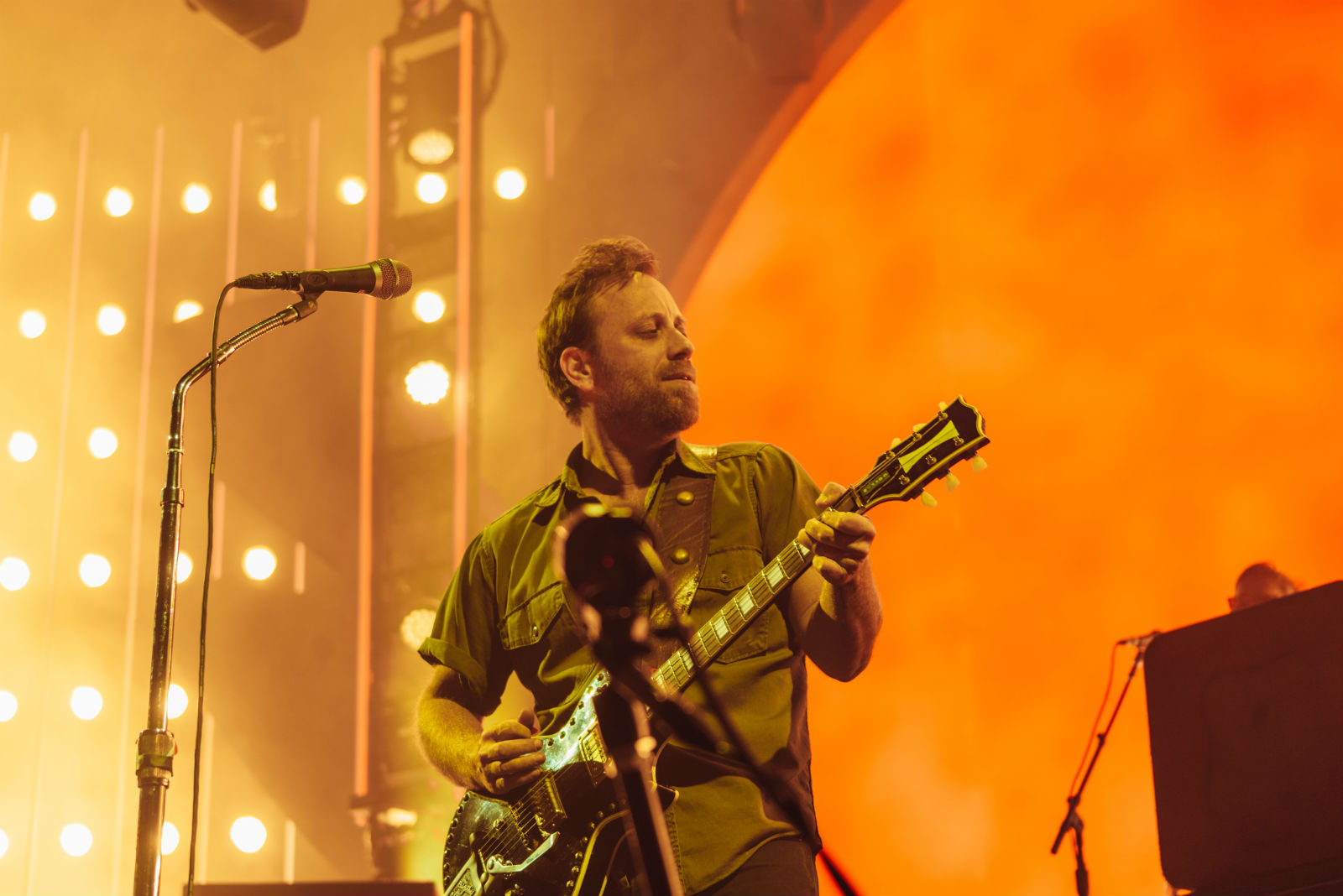 Indeed, it's a compliment to the Black Keys that, even outside of their music's seemingly natural habitat, they made Fiserv Forum feel like home Friday night, blasting out a rollicking run of greatest hits for the almost entirely filled venue and maintaining their pure, unvarnished essence and appeal – even when sharing the stage with a giant projection screen set, a big inflatable electric chair or production values generally worthy of their reputation, if not necessary for their raw brand of rock. 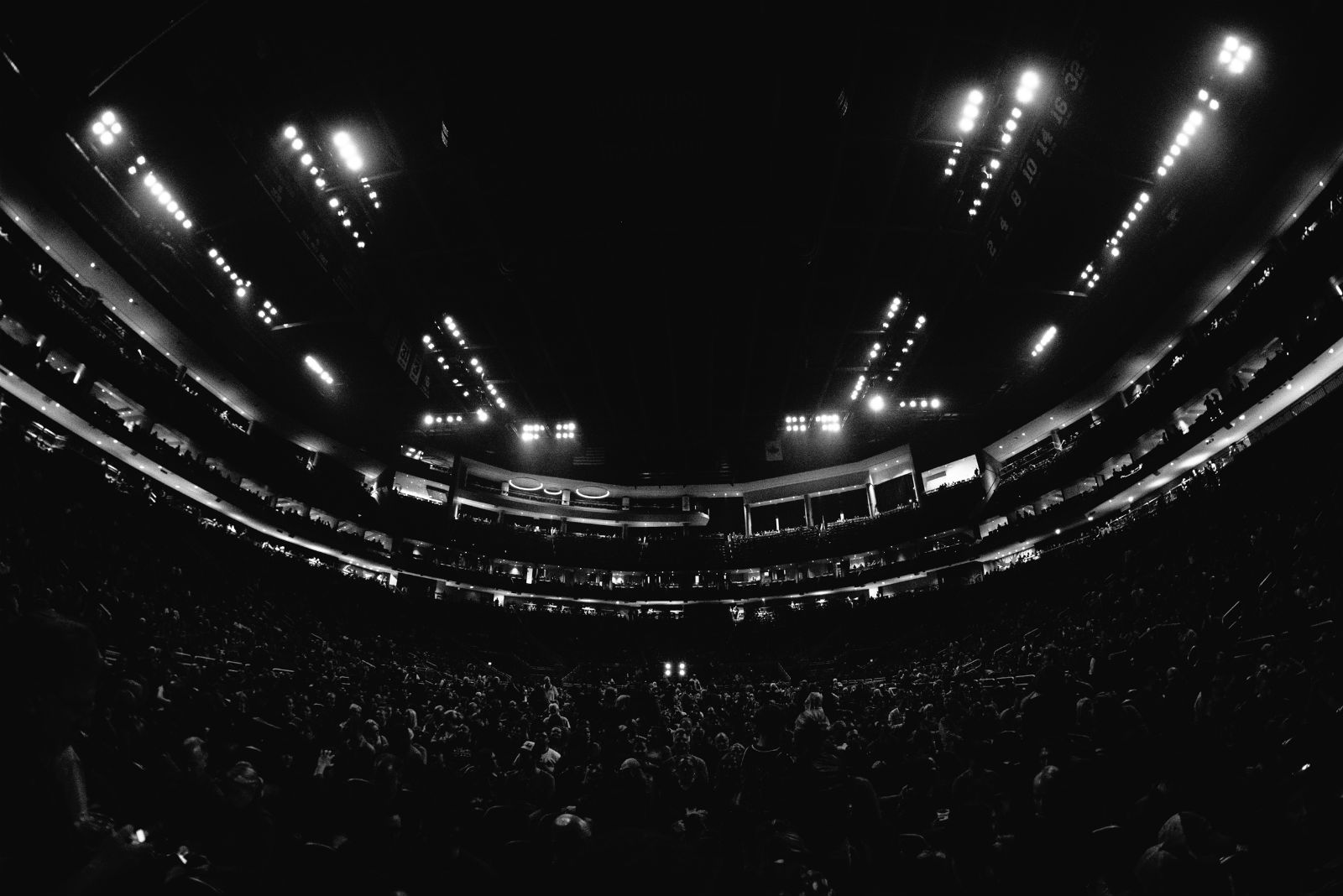 Arriving on the Fiserv Forum stage to some drunken ominous fanfare and a giant plain curtain backdrop, Auerbach and Carney began their run of greatest hits and rambunctious guitar riffs with the satisfyingly growly "I've Got Mine." Even though the band's touring off their latest album, June's "Let's Rock," entries off that new record – the whiskey-soaked "Eagle Birds," "Tell Me Lies" – felt more like quick diversions as the setlist stayed mostly in the territory of the band's greatest hits. (Their previous album, "Turn Blue," the most lukewarm-received of their discography, was almost entirely ignored save for the lead single and main hit, the strutty and psychedelic "Fever.")

After getting those solid if obligatory new cuts out of the way early, the band dropped its white curtain backdrop – with a helpful nudge from some stagehands – dropped the pretenses of promoting a new record and dropped a lineup of mostly hit after hit, starting with "Gold on the Ceiling" and running through "Fever" and "Next Girl." Each tune was perfectly scruffy, full of satisfying fuzz and strutty verve. All the while, the band's big backdrop lorded over the stage: a giant circle projection screen with colorful LSD-soaked visuals with rusted lightning bolts roaring up both side, a nice metaphor for the band, more grandiose than necessary but without sacrificing its texture. 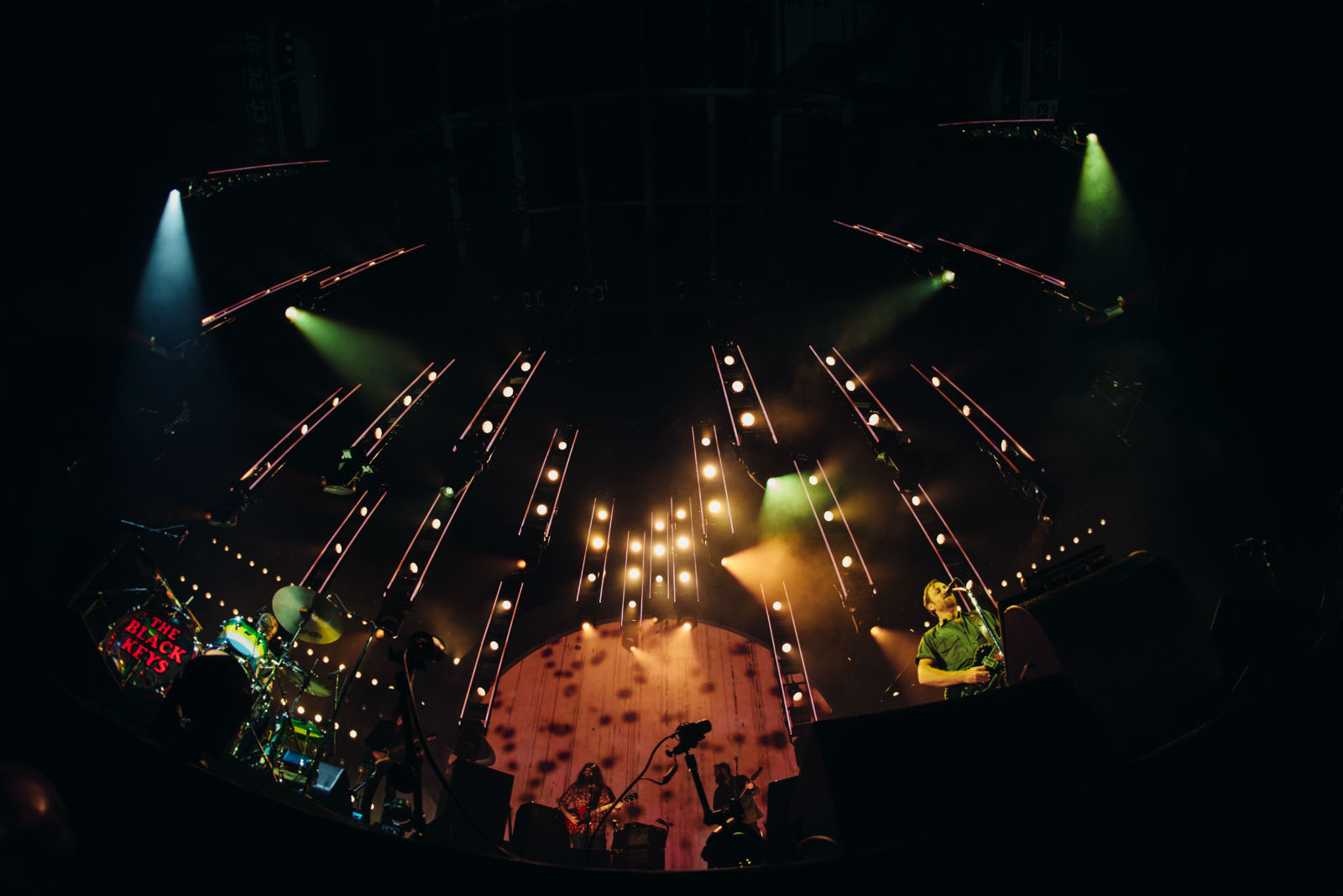 After another brief dose of "Let's Rock" tracks – the bluegrassy "Fire Walk with Me" and the sawmill rock of "Walk Across the Water" – Auerbach and Carney returned to their relentless run of hits, starting with their falsetto disco funk number "Everlasting Light." (The giant disco ball from past tours has been well retired; rest in peace, giant disco ball.) The momentum rose further from there, with Auerbach busting out some stinging guitar riffs and deliciously distorted solos on "Howlin' For You," the "oldie but a goodie" "10 a.m. Automatic" and the unvarnished flirty fuzz of "Your Touch."

The setlist, in general, was smartly and satisfyingly assembled, jumping around to different gems from the band's various eras, rolling from the churning locomotive of "Strange Times" to the whistling, playful "Tighten Up" to the skunky, slithery "Thickfreakness" and the bluesy, grooving lament "Ten Cent Pistol." The night climaxed with a perfect final pairing: the rock double-feature of "Little Black Submarines," transforming from an acoustic ache to a drunken roaring rollick, and arguably the band's biggest hit, "Lonely Boy." 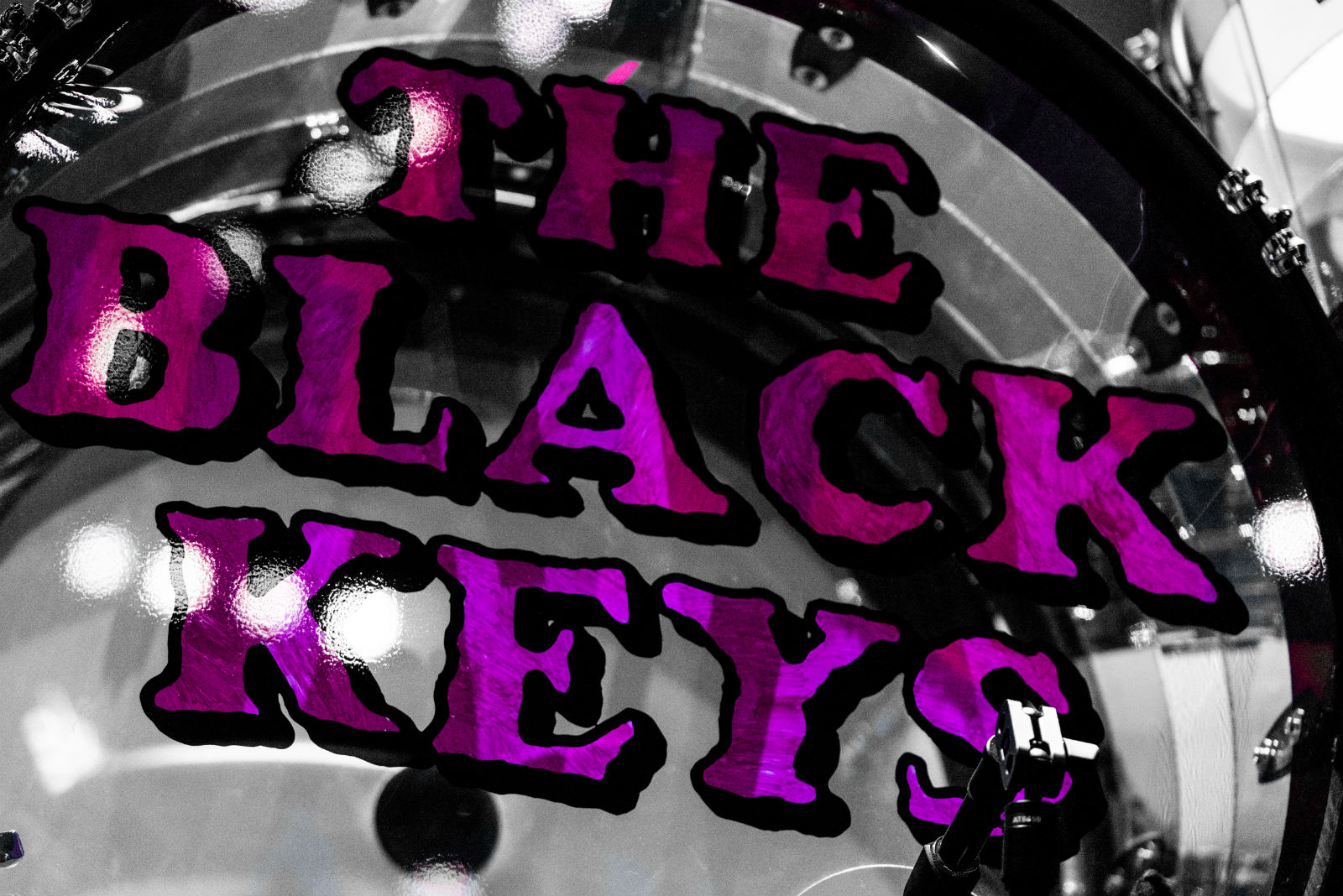 It was an ideal way to end the show – except it wasn't the end. As is annoying tradition with modern concerts, the Black Keys had to put on the pretense that they were done for the night, walking off the stage, while the audience put on the pretense that their applause would earn them a few more songs – all while an inflatable electric chair rose from the back of the stage, ensuring that, no matter what, more was coming. Appreciated, but can we as a species ditch the tedious rigamarole of the encore?

As for the encore, Auerbach and Carney saved the show's coda for the new record's biggest spotlight – as the inflatable chair from the album cover would imply – playing "Lo/Hi" and "Go." Both are fun songs and new hits – "Go," in particular, sounds like a Black Keys' greatest hits all packed into a single song – but both also felt like a mild comedown from the band's biggest and most recognizable numbers. Thankfully, the band went back to the past for the final song: "She's Long Gone," featuring a few last fuzzy face-melting riffs to send the crowd out with a final electric charge. 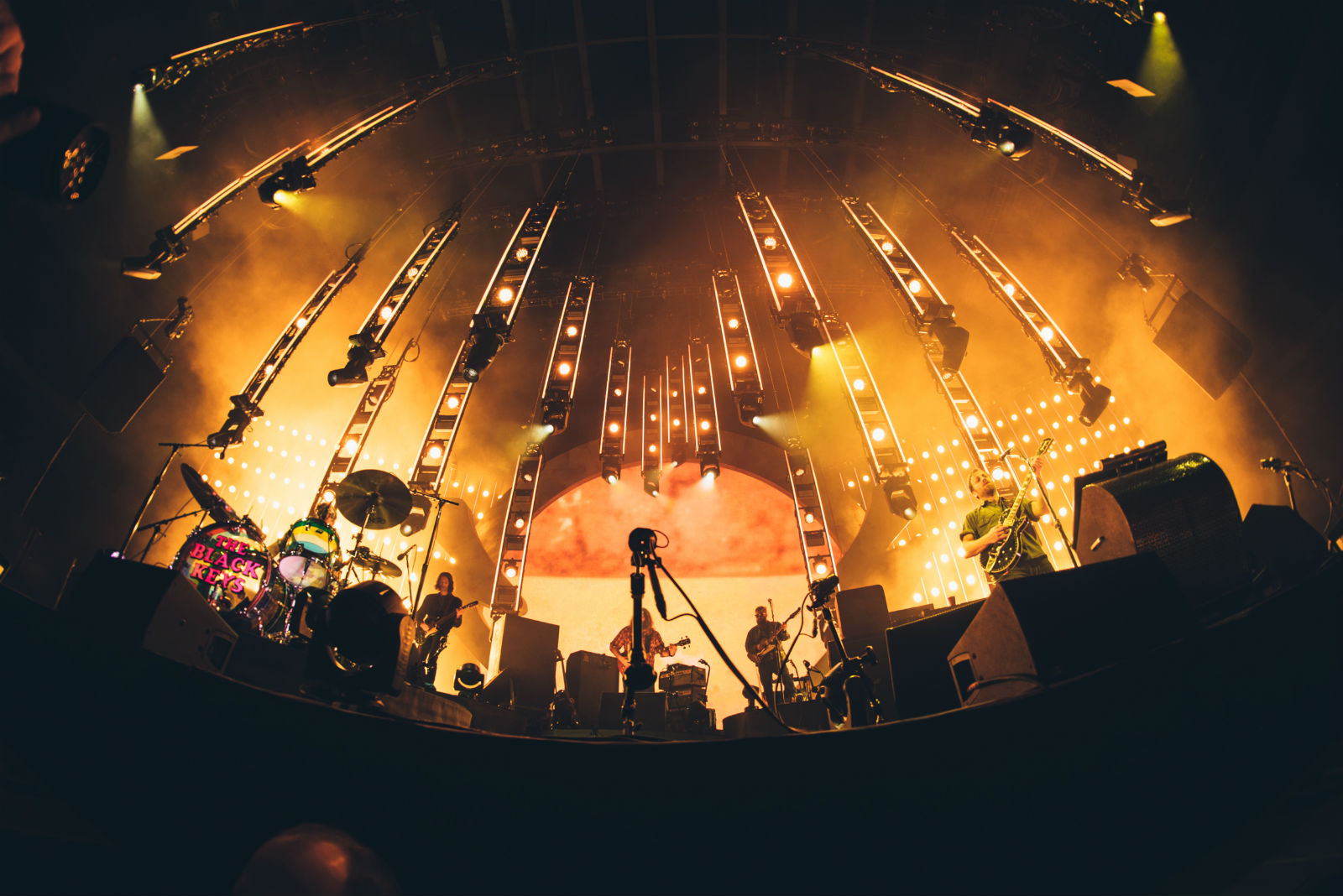 So sure, my fan dream of seeing the Black Keys in an intimate, charmingly dirty dive that matches the band's raw sound and spirit still remains just a dream. But even if arenas like Fiserv Forum feel wrong for the band, Auerbach and Carney do a terrific job of making wrong feel pretty damn right.

"I've Got Mine"
"Eagle Birds"
"Tell Me Lies"
"Gold on the Ceiling"
"Fever"
"Next Girl"
"Fire Walk with Me"
"Walk Across the Water"
"Everlasting Light"
"Howlin' for You"
"10 a.m. Automatic"
"Your Touch"
"Strange Times"
"Tighten Up"
"Thickfreakness"
"Ten Cent Pistol"
"Little Black Submarines"
"Lonely Boy"

The story behind the oldest Milwaukee concert listed on Setlist.fm