Back in 2013, as CHVRCHES was in the midst of its grand entrance with its debut "The Bones of What You Believe," the synth-pop band made its first Milwaukee appearance live at the Riverside. Well, the lobby of the Riverside, at least, as lead singer Lauren Mayberry peppily recalled to the significantly larger crowd gathered in the actual theater part of the historic venue Thursday night.

The trio has grown significantly since that first quick daytime show, earning a place on the Riverside stage proper for its tour stop in 2016 before returning last night literally larger with a fourth member in tow: a drummer, a first-time addition for this particular tour.

Not that size matters – just ask Mayberry, a petite but powerful spark plug who energized a terrific room-filling dance party Thursday night, keeping the excitement in Milwaukee going for those in the crowd still riding high from the local sports team's playoffs theatrics just a few miles away. 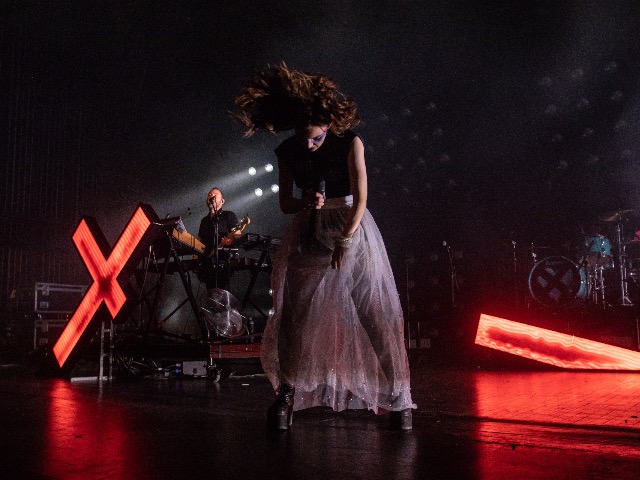 Much like game one of the Brewers' playoff run at Miller Park, it wasn't without its rough patches. At least the group's brief struggles came early in the evening, however, with the mix not quite right on the band's opener, "Get Out," the current single off its latest album, "Love is Dead." Mayberry's vocals came through tinny, and the mix as a whole sounded hollow – but those concerns were quickly amended by the band's very next song, the crisp first-pumping synth anthem "Bury It" off CHVRCHES' sophomore album, "Every Open Eye."

From there, CHVRCHES settled into a great groove, moving from debut album favorites like the the chirpy "Gun" and twisted, tortured love song "We Sink," busting out the crunchy, full-bodied synth hooks that get the blood (and fists) pumping – complete with Mayberry's voice unassumingly floating like a Trojan horse over each song, delivering honest, heartfelt and often barbed melancholy lyrics that sometimes cut as if they could get the blood spilling. That rhythm continued on into the band's new stuff as well, moving smoothly into "Graffiti" and "Graves," the latter a particularly unapologetic '80s-infected number with an opening that wouldn't sound out of place on "Stranger Things" and a poppy sound perfect for a retro dance party.

And as dance parties go, Mayberry makes a terrific host, a commanding presence on the stage – even if she didn't have thick-heeled boots and platforms to help stand above the crowd. Spinning and sauntering from side to side on the stage, posing and staring with assertive charisma into the crowd complete with "Black Swan" by way of Ziggy Stardust eyes, she's a fierce frontwoman. Then, on songs like "Clearest Blue," she even threw her own little dance party. Because how can one not when the beat drops on that rave-ready banger?

On the albums, especially the breakout "Bones of What You Believe," her delicate voice tended to serve the sharp synth and even more pointed emotional lyrics rather than standout over them. Performing live, however, seemingly offered up some freedom to flex her increasing powerful pipes, showing off its strength on "Graffiti," extending a surprising note at the end of "Gun" and generally fitting in the occasional fun unexpected vocal run throughout the night. As the band's sound and profile has gotten bigger and more confident, so seemingly has her voice.

Arguably the most entertaining part of the show came in between songs, however, as Mayberry jokingly gave the audience "two shows in one" with rapid-fire charmingly comedic banter with her bandmates Iain Cook and Martin Doherty. Rapid-fire may actually understate the speed of their brotherly/sisterly bickering. As soon as your ears processed one of her charming jokes, she'd already told another and moved onto the next topic – such as her self-confessed "odd legs" or how she'd gained a reputation as a "cold-hearted b*tch" on the internet, aided by her vicious use of memes, earning her the nickname "Omar with 'Parks and Rec' GIFs" from Doherty. Later on, she'd take the time to grab a fan's record sleeve and sign it with the rest of the band – all while delightfully ad-libbing and goofily bouncing across parts of the stage.

She confessed in the middle of the night that we were all just passing time until we could see Lady Gaga in "A Star is Born," but the crowd knew they were already watching a star on stage. 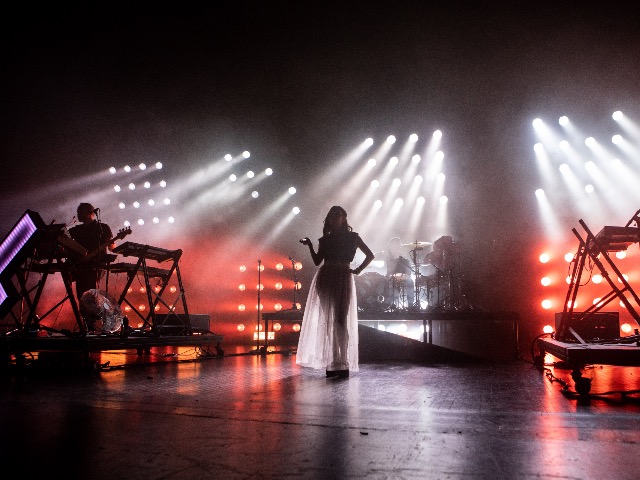 Mayberry's spunky charisma and crisp vocals make for a tough act to follow – unfortunately a task for Doherty, who briefly took over the lead in the middle of the show for "God's Plan" and "Under the Tide." He brought a jittery, loose-limbed energy to the two numbers, but save for the dance party explosion at the end of the latter, the two prog-tinted tunes lack some of the propulsion and fresh pop of CHVRCHES's best work. (As for Cook, he mostly stayed behind his instruments, though he did take a brief stroll into the spotlight for a guitar solo on '80s-ready revenge prom romp "Forever.")

It was a mild rut that took a few songs to fully escape. "Love is Dead" single "Miracle" is a booming, stomping, clapping rock anthem that's enjoyable but more Imagine Dragons Lite than CHVRCHES, while "Science/Visions" goes deep into muddy, trancing, bordering on gloomy prog sound, an peculiar detour even back on "The Bones of What You Believe." Then Mayberry briefly busted out the stripped-down ballad "Really Gone" which even she admitted to the crowd after finishing the song, "Such a bummer." Not that any of these songs were bad or complete buzzkills; they just marked a dip in the night's electricity.

Thankfully things charged back up for the final stretch, firing through "Deliverance" and "Forever" before hopping back to the breakout album with "Recover" and calling it a night with two hit tunes off "Every Open Eye": the poppily ferocious "Leave a Trace" and "Clearest Blue," which just dares you to lose your mind at the drop. (A dare I and much of the crowd happily accepted.)

Of course, CHVRCHES didn't completely call it a night after that, coming back out after the shortest of stage exits for a two-song encore of their biggest hit, "The Mother We Share," and the stinging sing-along "Never Say Die." Before starting the bonus mini-set, Mayberry thanked the crowd and told the story of their first tiny Brew City show on the other side of the theater's back wall. Obviously they've grown too large for that anymore – and if Mayberry and company keep putting on bright, radiant performances like Thursday night's show, Riverside as a whole may not be big enough to hold them.