This article originally ran in April 2019. Catch them today at The Brewtown Rumble.

It's been four years since The Atomic Spins released their self-titled debut album, which makes Friday's drop of their second album, "Mission 2," a much anticipated event for fans.

The Atomic Spins release show is Friday, April 12 at the Walker's Point Music Hall, 538 W. National Ave. Special guests include Black Belt Theatre and Mumblemouth. The music kicks off at 9 p.m. (doors at 8 p.m.) "Mission 2" will officially get released on Record Store Day, April 13, but advanced copies will be for sale at the show for $5.

The four-member alternative-poprock outfit features Jeffrey Miller on vocals and guitar; Steve Tych on bass; Jason Dove on lead guitar and drummer Aaron Fasting. Tych, formerly of the Rusty Halos among numerous other bands, replaced the original bassist shortly after the release of the first record.

"We all contribute equally to the music and work together really well as a whole," says Miller. "And it's pretty simple: we like playing and recording together."

The four men have very different styles and favorite genres, but they have something in common that's integral to their connection.

"Taste – it's something we all have. We're into different music, but the stuff we're into is the best of the best," says Tych.

Recently, the band played the weekly "Listening Party" show at the Tonic Tavern and were asked to open the show with a playlist of pre-recorded music featuring their rock-n-roll inspirations.

"I don't think we could have picked different songs," says Miller. "We had everything from The Hold Steady to Stiff Little Fingers to the Dave Matthews Band."

The dynamic between the musicians definitely works, something that is a testament to Tych being a natural fit even though he joined the band later. Miller, Dove and Fasting formed a solid rapport after working together for eight years in The Sandcarvers, a Celtic rock band that played Milwaukee's festival circuit and toured the United States extensively.

"It was really fun, but it ran its course," Miller says. "And we aways wanted an original rock band. So I started writing." 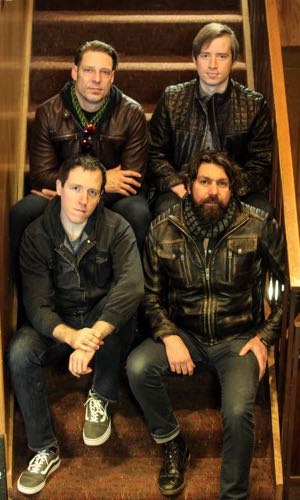 The Atomic Spins' name sounds vaguely scientific, and yet Miller assures it's nothing of the sort. Within a short period of time, a friend used the expression "atomically pissed" – one Miller had not heard before – and another friend told a story which included the term "bed spins."

"I'm not sure why – well, it was late night – but I put the two together," says Miller, who is originally from Michigan and cut his teeth in the Lansing and Detroit music scenes before relocating to Milwaukee.

"One of the my first nights in town I signed up to play at Linneman's and happened to meet some of the best musicians in Milwaukee," says Miller.

This summer, The Atomic Spins plan to go on tour, including a stint at the Mesa Music Festival in Mesa, Ariz. Although seasoned musicians, they still describe themselves on tour as "a four dudes in a van with a mediocre stereo system," but they have mastered a few aspects of smart touring.

"We try to remember things like Nebraska is 10 hours from Dallas, so don't book shows one day a part," says Tych. 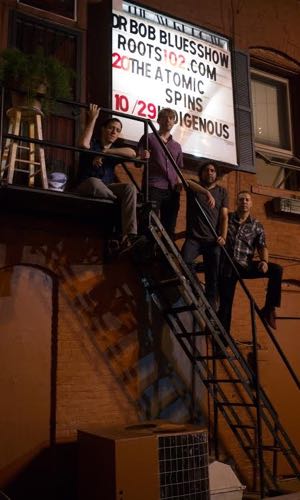 for myriad reasons – in part because the owner, Jim Rice, gives a portion of proceeds to a different non-profit organization every month.

"Jim Rice is a rock star with promotion and education. He's doing so much for independent bands," says Miller.

Tych adds, "Our values are aligned with his. He truly wants to see the musicians and bands succeed and he understands the long term – that if we do well, he does well, too."

But years in the Brew City music scene generates beefs, too. Miller says he'd like to see more non-musicians support Milwaukee bands – especially bands that are outside of someone's social circle - and Tych says Milwaukee needs more qualified managers and booking agents. However, both agree their complaints about the scene exist only because there are so many talented musicians in this city that deserve recognition and livable wages.

"If people realized the level of talent in their own backyard and supported this talent the scene would grow exponentially," says Miller. "A club owner in Columbus told me recently that he thinks there's 'something in the water' here lately because incredible music is coming out of Milwaukee."

"Mission 2" by The Atomic Spins will be available at the show on Friday or starting Saturday on iTunes, CD Baby and local record stores.

Milwaukee: Did you know there's a rock star among us and he lives in Bay View?