Even for die-hard fans of the 1980 comedy masterpiece, "The Blues Brothers," Gene Schuldt is far from a household name. In the credits, he's listed as "Nazi," but if you've seen the film a zillion times (as has this author), you'll know exactly who we're talking about when we tell you that Schuldt was the Illinois Nazi who drove the green station wagon.

Why are we telling you this? Well, Schuldt, a veteran of stage acting, also happens to live in Milwaukee. He has only two credited film roles – he was also in a 2008 short called "Onlyness … Death Understands" – but his story is more interesting than his IMBD bio would imply.

Beyond playing an Illinois Nazi, Schuldt is a second-degree black belt in Tae Kwon Do, teaches stage fighting, and has worked as a Santa Claus for many years. And, of course, he was right there for the most famous scene in Milwaukee cinematic history: when the Bluesmobile did a backflip over the then-unfinished I-794 freeway spur over Downtown.

We caught up with Schuldt via email, and learned some stories from the making of "The Blues Brothers" that have never been published – like how Schuldt came close to accidentally killing director John Landis on set.

Fans of Jake and Elwood, get ready to nerd out.

OnMilwaukee: How did you get the role in "The Blues Brothers?"

Gene Schuldt: The majority of my work has been in the theater. The summer that "The Blues Brothers" was shot, I was still in Actor's Equity and was cast in a play at Marriott's Lincolnshire Theater called "The Last Meeting of the Knights of the White Magnolia" by Preston Jones. It's the story of a bunch of rednecks in the small town of Bradleyville, Texas, who belong to this all-white "social club," sort of like a cross between Kiwanis and the KKK. It was the summer of 1979, and the play was set in the summer of 1962. I had a short flat-top haircut for the role, and short hair was not very popular in those days, so I had a unique look.

Well, one night before a show, one of the actors asked if I was registered with Ann Geddes Talent Agency, and I said no. The actor said I should go register first thing in the morning. I asked why, and he said he was at that office earlier, and they told him the casting director for "The Blues Brothers" was coming to see the show tonight, and was coming mainly to see my performance. Sometimes these breaks just fall out of the sky ...

So I registered and was told to come to an audition at a downtown hotel in Chicago. I went, along with a couple of hundred other actors, and eventually went into a room to read from a script. They had me do two monologues: the speech where Frank Oz is giving Belushi back his stuff at Joliet prison, and the police dispatcher speech were he says the use of force in apprehending the Blues Brothers has been approved.

A couple of weeks later I got a call that they wanted me for a few comic sequences, and to show up at wardrobe to get a costume fitting. I go to the costume fitting, and they're having us try on Nazi uniforms, so I asked what kind of "comic sequences" involve Nazis? They were very tight-lipped about everything, but I figure, hey, they're paying me.

The video "Onlyness" was a local video short that was shot in Milwaukee that didn't really go anywhere except a few festivals.

What do you remember about the filming of the movie?

We never saw a script, and so we had no clue we were going to be part of the car chases. The first day we shot the sequence where Henry Gibson is firing the Luger at the Bluesmobile. The director looked at the four of us who were going to be in the station wagon, and picked me as the driver.

Now during the actual stunts, a stunt driver drove the car, while I watched. Eventually it came time to do interior shots of our car. Normally they mount the camera and lights so it sits on the hood of the car, and then the car itself is towed by a stunt truck sent up so about five or six tech guys and the director can sit in the back facing our car.

However, it was late in the day, and we were going to lose daylight, so they skipped attaching our car to the stunt truck. The director, John Landis, just yelled "Nazi Driver, get into the car and follow me." So we loaded in, and followed him out to Jackson Drive, where we had about six blocks blocked off.

Landis himself then climbs on to the hood of our car, as he's going to operate the camera. So here we are, with an expensive camera, lights blasting in our faces, and the director all piled on the roof of the car. Landis yells out, "Drive straight down the center of the road at 45 mph, and I tell you what to do."

So we're off, and I can barely see down the road. We get up to speed, and Landis yells "Turn to each other and smile!" We did that about three times and then turned around and did it another three times, and that was it, as were were starting to lose the light. I was just a bit nervous as I could just see the headlines: "Famous director killed when the actor driving the Bluesmobile crashed the car!"

Now, when they brought the cast and crew to Milwaukee to film the cars going off the dead end ramp, that was about 200 people, with about 12 versions of the Bluesmobile, at least three of the red Nazi Pintos, and two versions of our station wagon. They need the spare cars in case anything were to happen, they have a replacement ready that's an exact replica. Were were in Milwaukee for three days, and every morning they would toss one of the red Pintos off the ramp. They had a hard time trying to get the car, which was not driven, just pushed by a stunt car, to come off the ramp flat, so it would match the shot where they dropped a copy of the Pinto from a helicopter in downtown Chicago.

However, the day when they did the shot of the front wheels of the Bluesmobile dropping over the edge of the ramp, we almost saw the car and the stunt drivers actually go off the ramp. It was two different shots. The first time, the wheels dropped off, and the driver shifted to reverse, and backed back onto the ramp as planned. I thought it went pretty well. 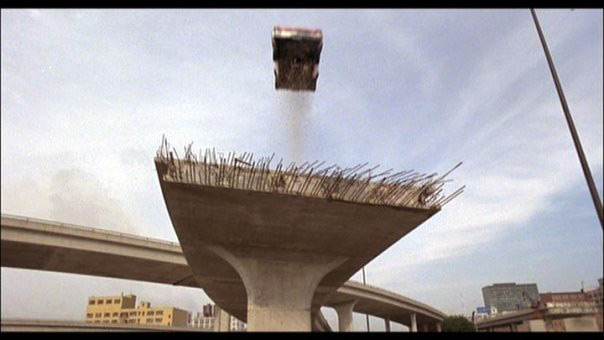 John Landis wanted a second take, and he wanted the driver to go much faster this time. Well, the driver overshot, the car started to go off the edge, but the undercarriage of the car got hung up in the concrete reinforcement rods that were sticking out of the end of the ramp when they stopped building it. All of the tech guys up on the ramp ran over and held the rear end of the car down while the stunt guys crawled out of the windows, and they kept holding the car down, until the moved a crane over to pull the car back on the ramp. The rest of us were down on the ground thinking at the time, those guys are going to die now.

When you watch the film, you'll see both shots. The second shot where the car went too far is cut with the first shot of the car backing up off the ramp.

The other memorable shot was the Nazi rally scene at the bridge with 300 extras acting like an angry mob. Dan Ackroyd actually drove the Bluesmobile in that one, and I was in the middle of the line of Nazis, and had to run to the wall of the bridge to get out of the way.

After a few takes, the 12 stuntmen dressed like us actually did the jump into the water off the bridge. This was filmed at the Jackson Park lagoon, which is just to the south of the Museum of Science and Industry. That lagoon is stagnant green water, and is about 8 feet deep under the bridge – the bottom 2 feet being black muck. 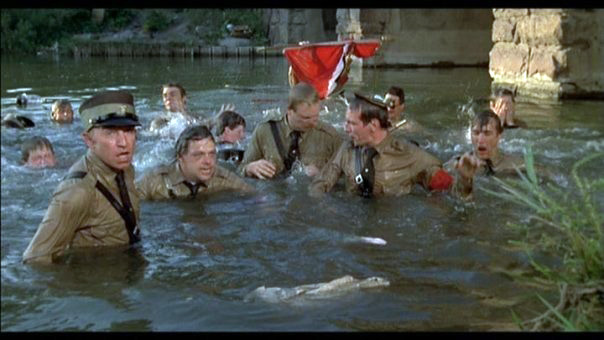 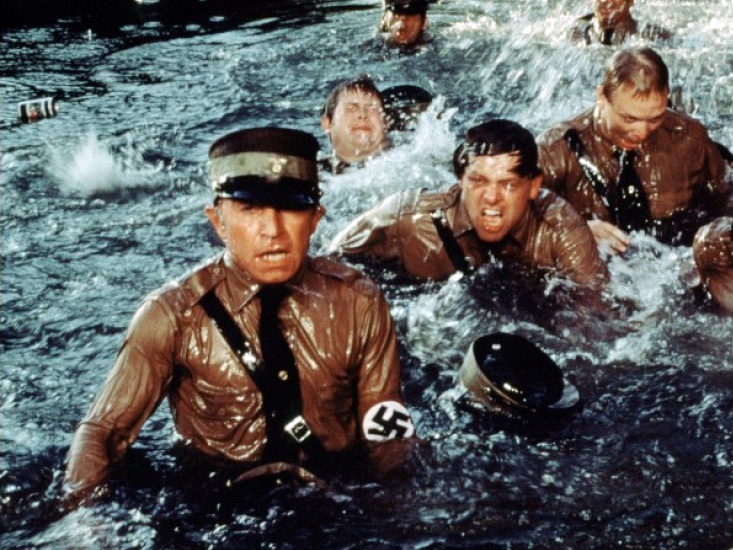 If you look close when your watch the film, you'll see the water turn black after the stuntmen jump, as they all likely hit bottom. Now, for the last shot of the day, we had to get in the lagoon. It was a hot summer day, and I remember there was a bucket of dead fish next to the lagoon, that they threw in the water after we got in so we'd have dead fish floating around us. Ain't acting glamorous?

Our direction was on "action" we'd drop underwater, count to three, and then come up thrashing. I remember thinking I was glad we had paratrooper boots on, because there was God only knows what sitting on the bottom of the lagoon. We had to do the shot six or seven times, and then were were done. Our costumes reeked of dead fish, and we could change clothes, but we had no showers, so that had to wait until I got home.

You never saw the script? Is that hard for an actor when you don't what your role is doing in the movie other than your delivering your lines?

That is correct, we never saw a script. If any of us would have had any lines, we would just get a "side," which would be the few pages that just concerned this scene. There was a lot of secrecy about the movie, (we just knew) that there were a lot of car crashes. I wasn't aware of the car chase inside the mall until I saw the movie on opening day. We also didn't know when our scenes would appear, either. We don't even show up until about an hour into the movie, so again, the first time I saw the film, I was a little worried we ended up on the cutting room floor.