On Nov. 9, 2017, during an OnMilwaukee editorial meeting, culture editor Matt Mueller brought up the craze of Hallmark Christmas movies. It was a decision he would come to immediately regret, as he was quickly punished assigned to watch a new Hallmark movie a week during the holiday season and write about his discoveries and loss of dignity.

Two years later, having learned absolutely nothing, he made the mistake all over again.

These are the never-ending chronicles of Matt's Hallmark Holiday Hell.

This Hallmark Christmas movie stars Jodie Sweetin, a human composite of every "Bachelor" contestant and candy canes. A whole lot of candy canes. Which reminds me: Candy canes are garbage.

Candy canes are the candy corn of Christmas – except candy corn is actually good, and candy canes are Christmas decorations that we've been tricked into eating. Every year, somebody– a doctor, a bank teller, your worst enemy – gifts you a candy cane, and every year you have to pretend like you're happy you got it before absentmindedly throwing it somewhere to get crushed into minty dust. They taste like mouthwash, they're secretly annoyingly sticky and splintery, they're tediously wrapped like CDs and they're even more tedious to eat. Either you crunch into it and murder your teeth, or you suck on it for two hours, slurping like an idiot when you reach the hook. There's a reason that most candy canes are hung on Christmas trees as ornaments: It's the only thing they're good for – well, that and sucking them into a sharp pointy shiv to protect yourself with. Otherwise, take these candies and launch them into the sun. The Valentine's Day candy hearts with the messages on them can go, too.

So best of luck to "Merry & Bright," aka BIG CANDY CANE PROPAGANDA.

Jodie Sweetin, who is now just the second most infamous "Full House" alum with off-camera issues. Snark aside, being a child star in Hollywood is famously a brutal and tricky minefield, and a congratulations to her for getting through it, getting sober, getting candid about her battles (something we as a society struggle with) and getting her degree as a drug and alcohol counselor to help others fighting with addiction. Honestly, that's a story worthy of a movie of its own.

She co-stars with Andrew Walker, a Hallmark regular with chiseled jawbones sharper than ice skates. No, I'm not jealous whatsoever, nope; why do you ask? Anyways, he once made a multi-episode appearance on the original "Sabrina the Teenage Witch" as Cole Harper, a cocky reporter co-worker with some WILDLY unfortunate '00s hair. I miss the days when looking like you went outside during the winter with wet hair was in style.

Want to know the biggest twist in "Merry & Bright"? It took THREE writers to put together this story. It took three people to fill in the Hallmark Christmas Movie Mad Libs sheet! I guess when you're making a movie trying to make candy canes seem charming and enjoyable, you gotta bring in reinforcements.

OK, I've been pretty harsh on candy canes so far, and I feel like I might be hurting our main character's feelings since she runs a candy cane factory, so let me say: They're not the worst candy. (That's easily the Valentine's Day candy hearts, which rank below pigeons as a message-delivering device and rank below rocks as an edible foodstuff.) But they do not make a charming and warm plot device for a holiday movie. Cookies, kringle, gingerbread houses and all of the other usual suspects are perfect. Sure, they're literally soft, gooey and warm, but they're even visually warm and cozy too, from the brown and tan colors to the cute kitchens they're made in. Candy canes, on the other hand, are white sludge made into shiny and sleek packages in cold, silver and grey factories with complicated machinery. Almost anyone can harken back to personal memories of baking or decorating cookies; almost no one has memories of cooking up candy canes.

So as a hook – literally – "Merry & Bright" was working from behind in the cutesy charm department. But you know what's a good way to make up for that? ACTUALLY FUNNY JOKES. And maybe all this snow and cold in November has cracked my fragile sanity, but I legitimately laughed at some of the humor in "Merry & Bright" – mainly the meet-cute between our stressed small-town candy cane CEO Cate and our brash big-city consultant Gabe, sent in to help balance the company's numbers. She's been peppered with lots of bad blind dates, so when he eagerly introduces himself as the man she's been looking for, Cate thinks he's just another wasted Friday night at dinner. And the ensuing bit of mistaken identity banter is ... actually worth a chuckle or two! I'm not saying Billy Wilder or Mel Brooks need to worry about taking any notes, and not much else in the movie really rises to that level, but on the Hallmark standard – where the feather-gentle, impact-free, priest's homily-esque attempts at humor generally just earn the recognition that a joke happened as opposed to an actual laugh – this is a step above most. Twist on a twist: Those three screenwriters may have earned their money after all!

You what's another good way to charm me into forgetting about candy canes? PUPPIES! I know I put up the facade of a pretentious jagbag who cannot and will not be amused by anything except the hoity-est of foreign comedies (*cue French laugh and long drag from a cigarette held with one of those fancy holders*) but I am not above being delighted by an adorable pupper who cocks his head at his owner LIKE THE CUTEST, BESTEST LITTLE BOY.

And indeed, "Merry & Bright" has that. You see, while Cate and Gabe are saving the business (but more importantly falling in love), Cate's mom – Sharon Lawrence from "NYPD Blue" – has bought her daughter the perfect Christmas gift: a cute puppy that Cate had eyed up at the shelter previously. But the mom must keep the dog a secret until Christmas, so she keeps the puppy at home, constantly having conversations with the precious pupper on her way in and out of the front door. And he's GREAT! He makes happy faces and lays down all sad she's leaving and acts like he's listening and understanding human speak. I BET HE'S A GREAT CUDDLER TOO! I sincerely would've watched an entire movie of this mom and this dog hanging out and becoming best friends.

Unfortunately, that's not the entire movie. Instead, we get the typical pleasant if utterly predictable Hallmark love story of two people from opposite worlds slowly falling in love while saving a business – complete with snow falling like nature's confetti.

While I actually like Sweetin and Walker – she's peppy and natural, while he's amusingly enthusiastic and energetic, perfect for brightening up cliches as much as possible – they don't spark much romantic chemistry, even when they just blow past any near-miss kiss tomfoolery and jump straight to a big ol' smooch while touring around a toy store in New York City that DEFINITELY ISN'T FAO SCHWARZ. (Because that iconic location sadly closed in 2015, assumably because of millennials.) Even if they brought on-screen heat on par with the sun, it'd be a struggle to make lines like "Life happens when you least expect it" and "Don't let being scared stop you from living your life" any less trite. IT TOOK THREE WRITERS TO COME UP WITH "Each one is made with love"!? Could've just hired a literal Hallmark card. I think they blew all their creativity on that meet-cute.

In between all of those trite and typical romantic moments (why does the entire town cheer him pressing the button to turn on the city's holiday lights? You don't know him! HE DOESN'T EVEN GO HERE!), Cate and Gabe try to figure out a way to save the company – and save Cate's creative energy, which seems not entirely enthused by making the same candy canes her grandmother made when she was alive, running the company. They land at first on making chocolates during the non-holiday times of the year, since Cate makes tasty truffles on the side – including a French toast chocolate which NEEDS TO BE IN MY MOUTH AT THIS MOMENT. Or maybe not, because when Gabe takes a bite, he's supposed to have a look on his face that says, "This is delicious – and I have an idea," but instead it looks like he's discreetly trying to find a napkin.

On the plus side, though, they're not candy canes, so they pitch it to a big-time business guy who seems aloof at first, but eventually likes the chocolates so much that he wants to invest in the company ... and also shift them away from candy canes, pretty much entirely. SOUNDS LIKE A WIN TO ME!

Or ... not, because Cate still loves that aspect of the company and doesn't want them to lose their identity, the identity her family crafted for decades. So she splits with Gabe, wondering if he truly likes her and her company for what they are, and doesn't sign the deal with the business big wig. CANDY CANES! (*shakes fist at sky*) Though this is a victory in some ways because, yet again, a Hallmark movie dodged an annoying and contrived miscommunication for its third-act plot drama in favor of an actually legitimate and valid conflict. Plus, Sweetin and Walker are likable actors, giving enjoyable enough (if not chemistry-loaded) performances, so I was sad to see them not hang out anymore.

But, of course, they get back together – and get the company back on its feet with the creation of some uniquely flavored candy canes to pitch to the business honcho, who loves them and agrees to invest. Cool ... but people still only buy candy canes during the last few months of the year, so that goal of diversifying the company into something that could be profitable and function throughout the entire year? Not happening. But everyone seems happy, and Cate and Gabe are back together.

As for the most important plot line, though: CATE'S MOM GETS TO KEEP THE PUPPY! Not sure I could ask for a happier ending.

Not that I needed any more excuses to drink heavily while watching Hallmark holiday movies, but thanks to Wide Open Eats, I found this Hallmark drinking game created three winters ago by human saint Brittany Graves and posted on Facebook. So let's go through the checklist and see how crushed we can get off Christmas cliches!

We've used the same Hallmark drinking game for a while now, so let's mix things up with this new number from Good Housekeeping. 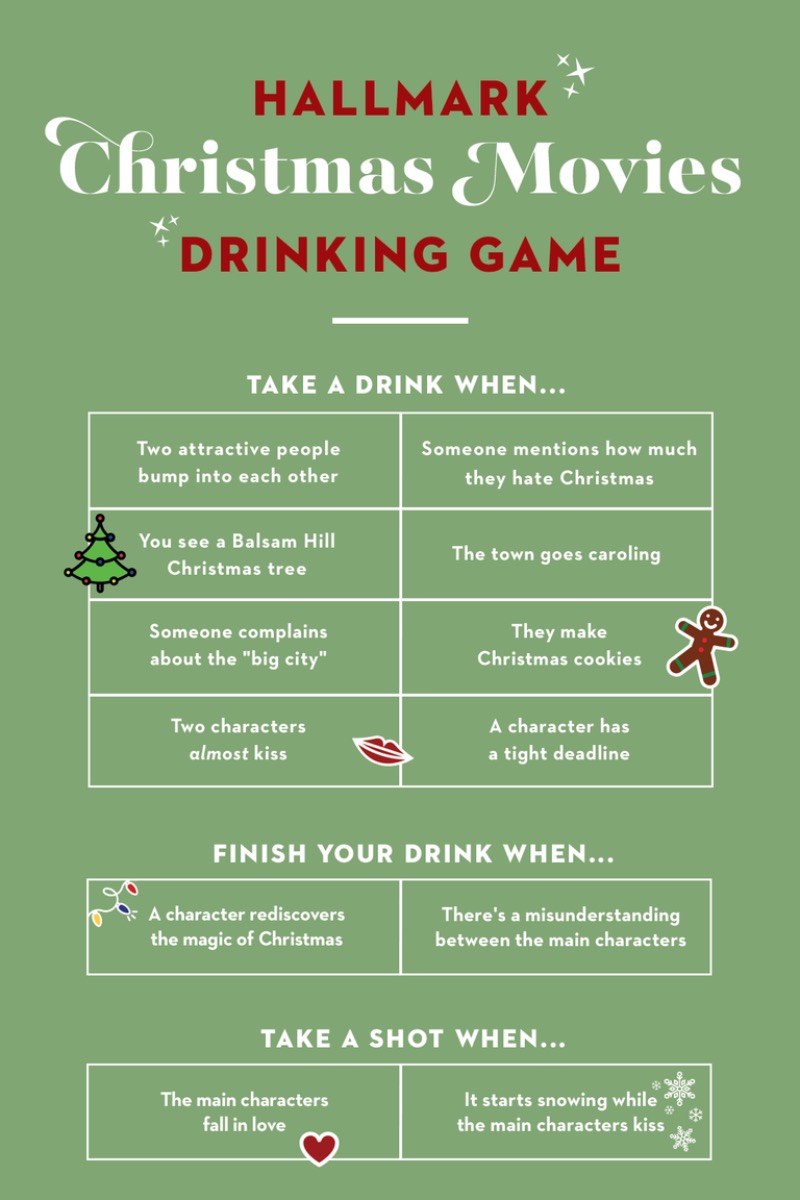 They call it "the only Hallmark Christmas movie drinking game you need to play," but I have no idea why somebody would limit themselves to just one. If I'm watching Hallmark movies, I'm taking as much liquid support as possible.

Thankfully, the final categories save this drinking game, as you get to finish your drink shortly into the movie with Gabe and Cate's funny meet-cute confusion, then pour yourself another a drink and finish it because Gabe gets his Christmas love refreshed as the movie goes along – though even that's less holiday cynicism and more just a busy company man finally getting time to savor the season again. BUT I'M TAKING IT! Then you get to take two shots – one for the main characters falling in love and one for it snowing during a kiss – but those are gimme categories. That's like earning a shot because there were credits or because a character was wearing a fashionable winter coat.

In conclusion, learn from my mistake and never change your traditions. Otherwise you'll end up like me: disappointed, sober and writing a strongly worded letter to Good Housekeeping.