Right next door to a historic building marked with the year 1887 moves in one of the city's newest and most futuristic attractions: RSVR, a virtual reality experience center, coming to downtown Bay View.

Opening at 2210 S. Kinnickinnic Ave. at the start of the new year, RSVR is part arcade bar, part business center and all high-tech interactivity, brought to Bay View by brothers Ryan and Reid Spiering.

"We're kind of taking other experiences and trying to mimic parts of them while doing something completely new," Reid explained. "We're able to say, 'We don't want to do that, we want to do this,' and create a new experience that didn't really exist before and try to do it in a fresh, new way that people maybe haven't experienced before."

One of RSVR's biggest goals, according to Reid, is to bring virtual reality, or VR as it's commonly known, to a general audience. So instead of creating a hyperactive and high-energy space as one might expect from a geek-centric arcade bar setting, RSVR is well-lit and cleanly assembled with white walls decorated with some black computer chip-esque patterns as well as some sleekly modern seating options and tables. 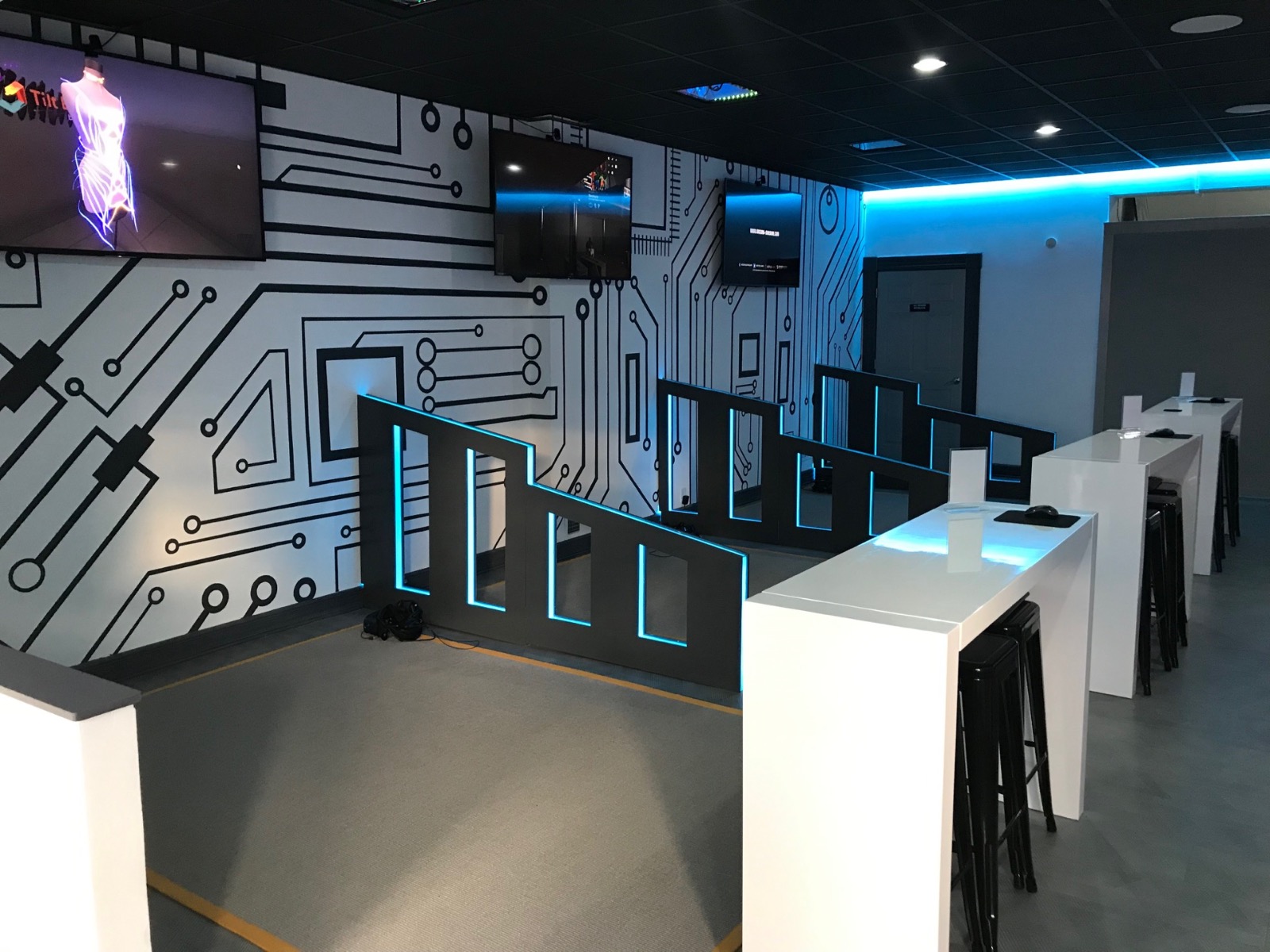 "Our goal is to bring VR to a more general population – not say, 'You're a gamer; you play VR.' We say bring your mom. You never know how much fun she's going to have playing 'Beat Saber' and things like that. It's about bringing these opportunities to an array of people," Reid said. "It's been a fun challenge to say, 'How do we make it welcoming to everybody but still legitimate to those who know games and know VR?'"

"A lot of that was incorporated into how we designed the space," Ryan added. "As much as it has to have some familiar elements to an arcade, we wanted to be a little bit more intriguing and interesting and inviting than a Chuck E. Cheese. We tried to make the place a little bit unexpected, with the design and the lighting, to attract some of those people who might not be as interested in going to a straight-up arcade."

When guests arrive at RSVR, the first place they'll likely head is the back wall of the space, which features games and activities projected and played across three interconnected screens. The wall is meant as a kind of waiting station for groups that arrive early, giving them games both classic and new to play across a uniquely wide space while waiting for their VR station to become available. RSVR will also serve up a menu of beer, wine and canned hard drinks, along with soda and water, as well as snacks and outside local food options especially for larger parties or longer reservations. 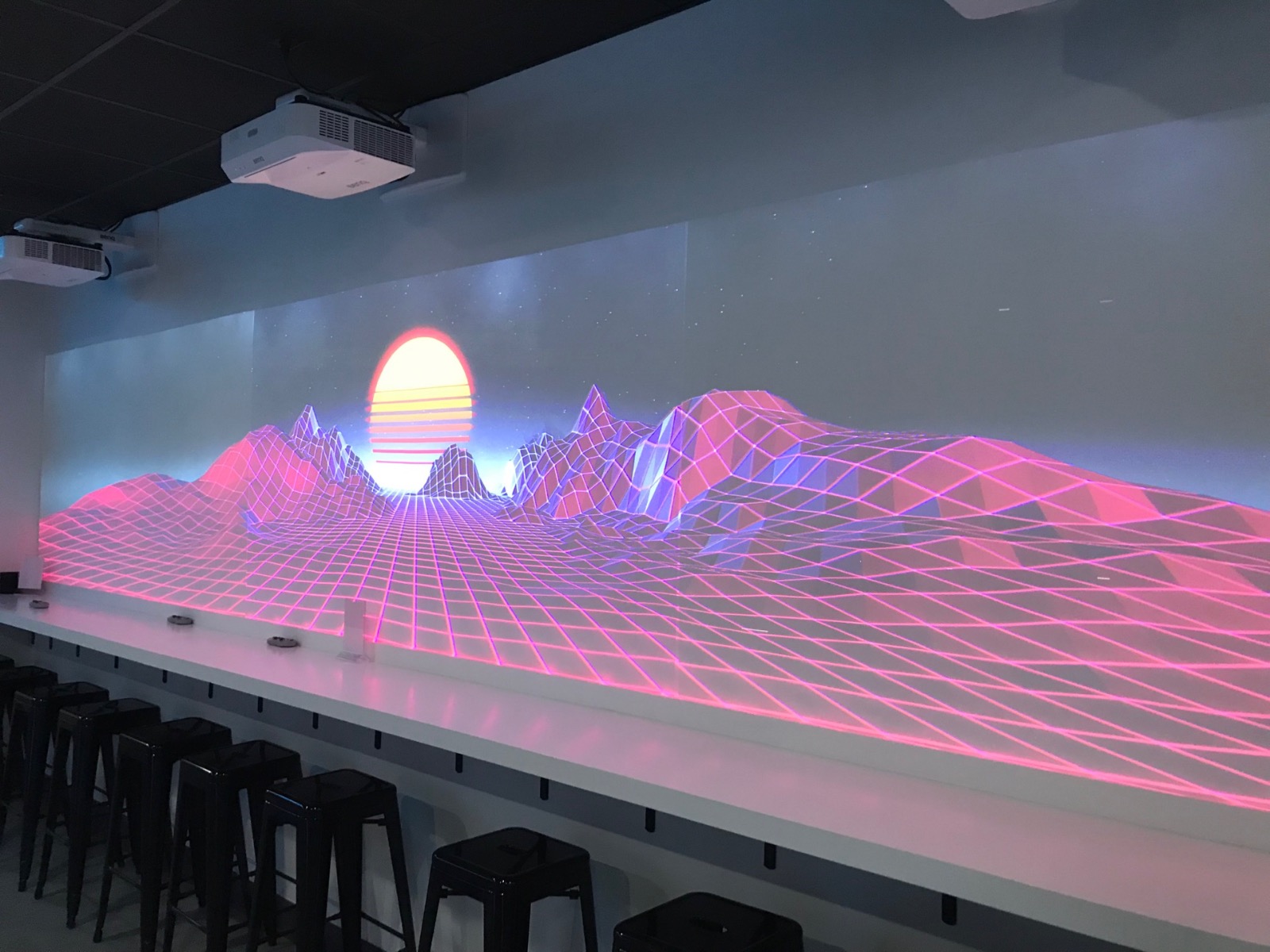 As for the featured presentation, RSVR features three stations, divided by "Tron"-like blue glowing dividers, for groups of up to four people to play within. The star of each station is the headset: a VIVE Cosmos, featuring some of the highest resolution of any VR headset on the market. The player stands in a large taped-off box, and while they hack away at glowing boxes, shoot at zombies or merely doodle in a digital art studio, TVs located at the front of each station and speakers above each individual group table broadcast the action to the rest of the party. 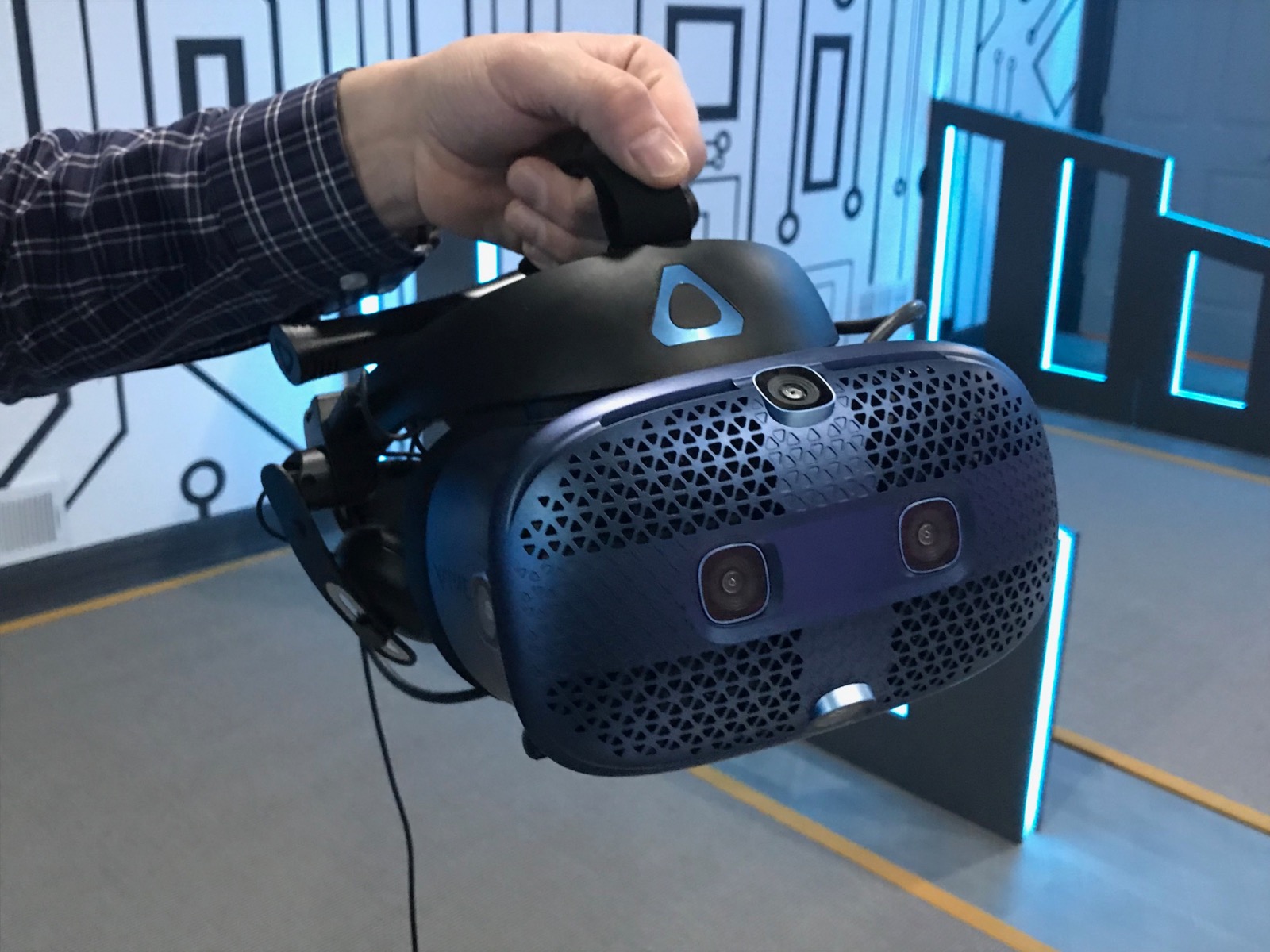 When RSVR opens next month, the VR center will offer around 50 games downloaded and ready for visitors to play on its menu, according to Ryan. The options will range from simple digital doodling spaces where guests can draw designs and drawings in a three-dimensional canvas to easy pick-up-and-play games like "Beat Saber" – a futuristic and immersive hybrid of "Fruit Ninja" and "Guitar Hero," where the player slashes at boxes and dodges walls to the beat of a song. For more experienced players, there's also shooting games like a zombie simulation where you protect a base from a slowly approaching horde of the undead or run around a digital world dodging bullets and projectiles, activating "Matrix"-esque slow motion by how fast you move in reality. 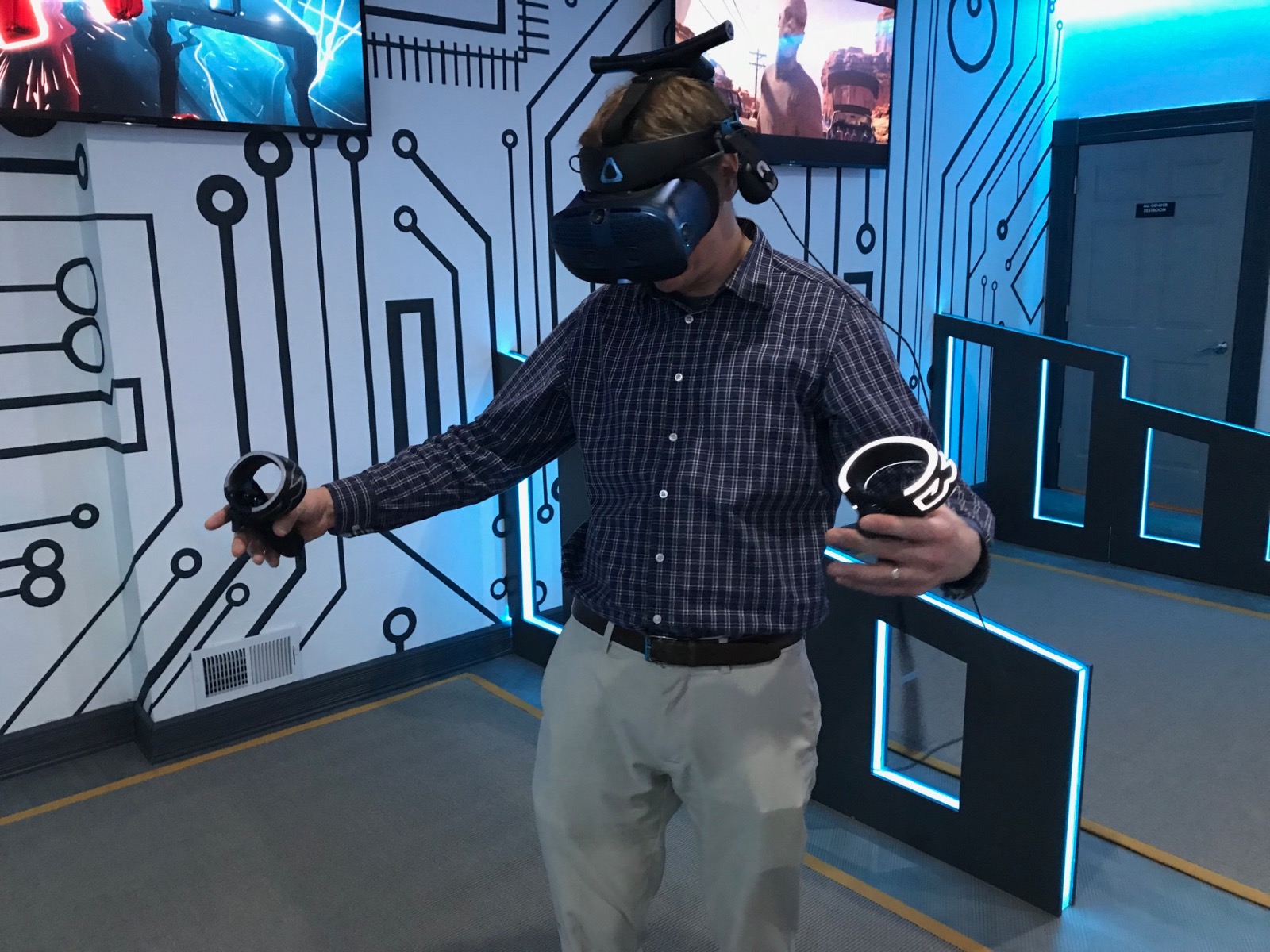 For those wanting a completely different but equally immersive VR experience, RSVR will also offer a collection of more experiential options, more about feeling like you're in a unique setting or new world. One experience offers players the chance to hang out in the ocean, whether hanging with a whale floating in the blue sea or doing your best James Cameron impression by diving all the way to the bottom of the ocean and exploring the unique creatures and landscapes that reside in the deepest, darkest places on the planet. Other future experiential VR stories on the RSVR menu, according to Ryan, include floating around the International Space Station and historical events, such as marching with Martin Luther King Jr.

"My older brother is a history teacher, so we're trying to find some more educational experiences that we can involve class field trips," Ryan explained. "But (we'll have) definitely huge a variety – some things that are really great for a 4-to-7-year-old kid, but at the same point, blowing zombies' heads off and things like that on the other end of the spectrum." 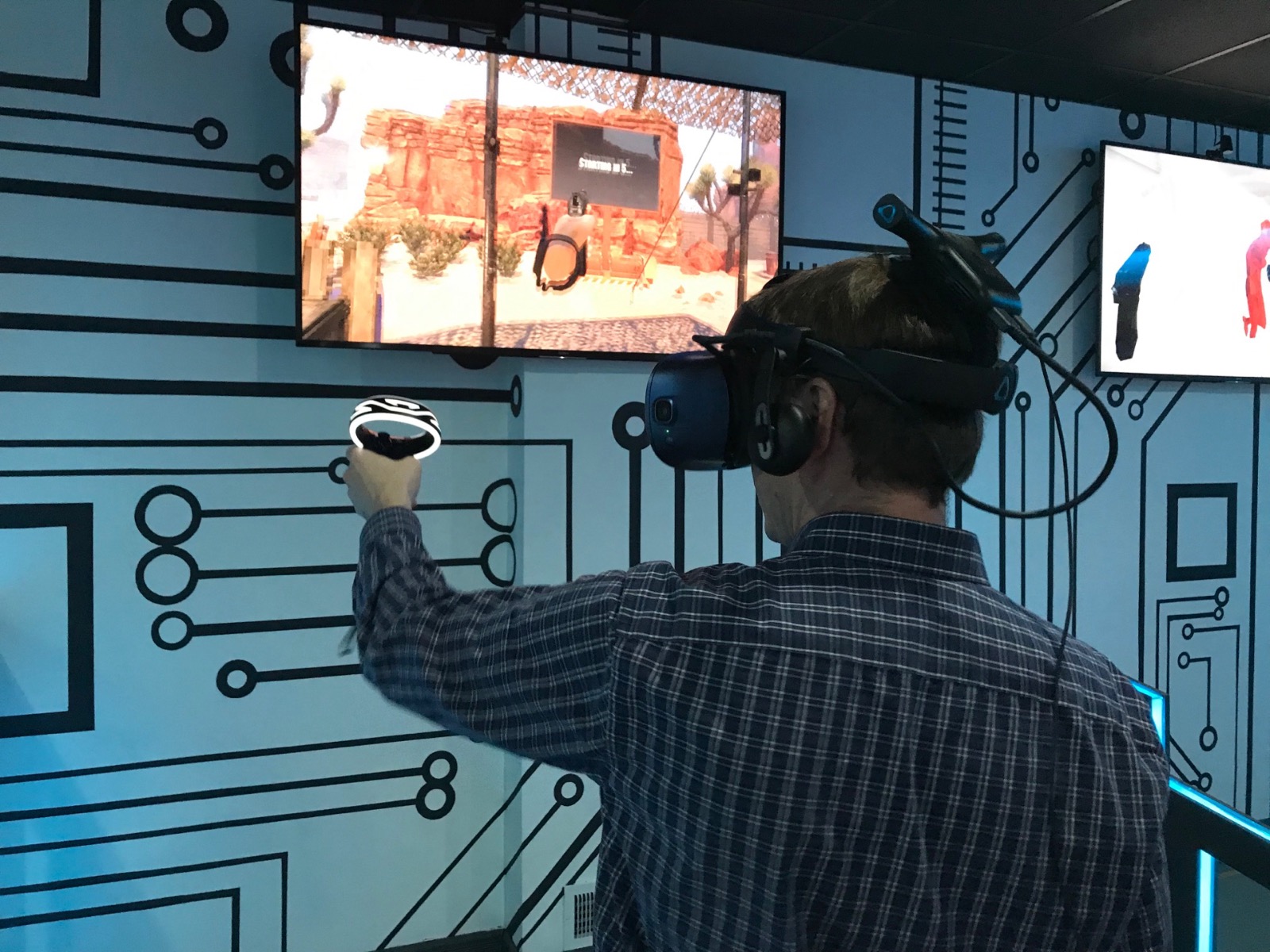 During my first look, I got the chance to actually try out the VR experience. Putting on the headset is easy, even for a complete newcomer like myself; you slide the straps over your head and adjust the tightness with a crank in the back as well as the vision with a knob on the side. (The headset has plenty of space to slip over one's glasses too.) Most importantly, though, for those worried about running into a wall or plowing into one's friends while escaping zombies, the headset comes with outside cameras so if you get too close to the border of your area, a digital grid appears in your vision telling you to avoid going further – and if you still do and cross over the taped-over lines in the station, the outside cameras take over, showing you the real world once again without having to take off the headset.

Complete with two hand controllers, I tried out two games: "Beat Saber" and "The Blu." The former was simple but a lot of fun, hacking at floating future cubes with both hands and offering that addictive Nintendo-like combination of wildly easy to learn but sneakily hard to master. (There are multiple difficulty levels to choose from as well; I obviously stuck with the easiest possible setting.) The latter was an experiential game, exploring the eerie skeletal ruins of a whale at the bottom of the ocean with a flashlight – complete with cameos from adorable glowing jellyfish and a giant squid that may or may not have given me a heart attack. In both cases, though, the experience was intuitive and totally thrilling.

There's more than just thrills at RSVR, however. While the VR center will open for arcade mode at night on Thursdays through Sundays, during the day, RSVR will be available for businesses to rent. Ryan's background is actually as an architect, self-teaching himself virtual reality over much of the past five years in order to enhance his work and use the new technology to design, view and test architectural ideas and mockups in three-dimensions. In fact, RSVR itself was designed and crafted all in virtual reality – complete with a digital Kinnickinnic Avenue – before being created in the real world. 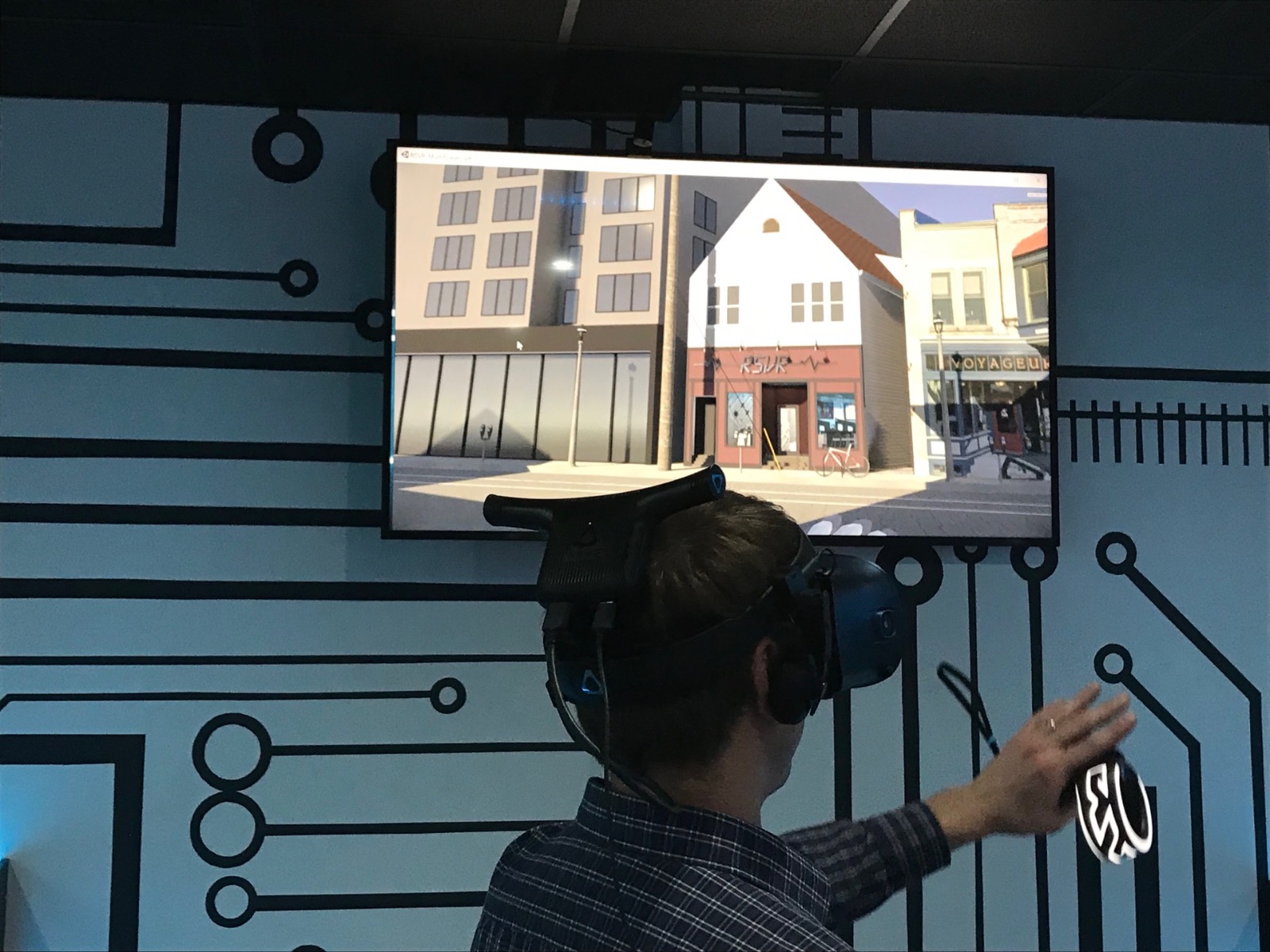 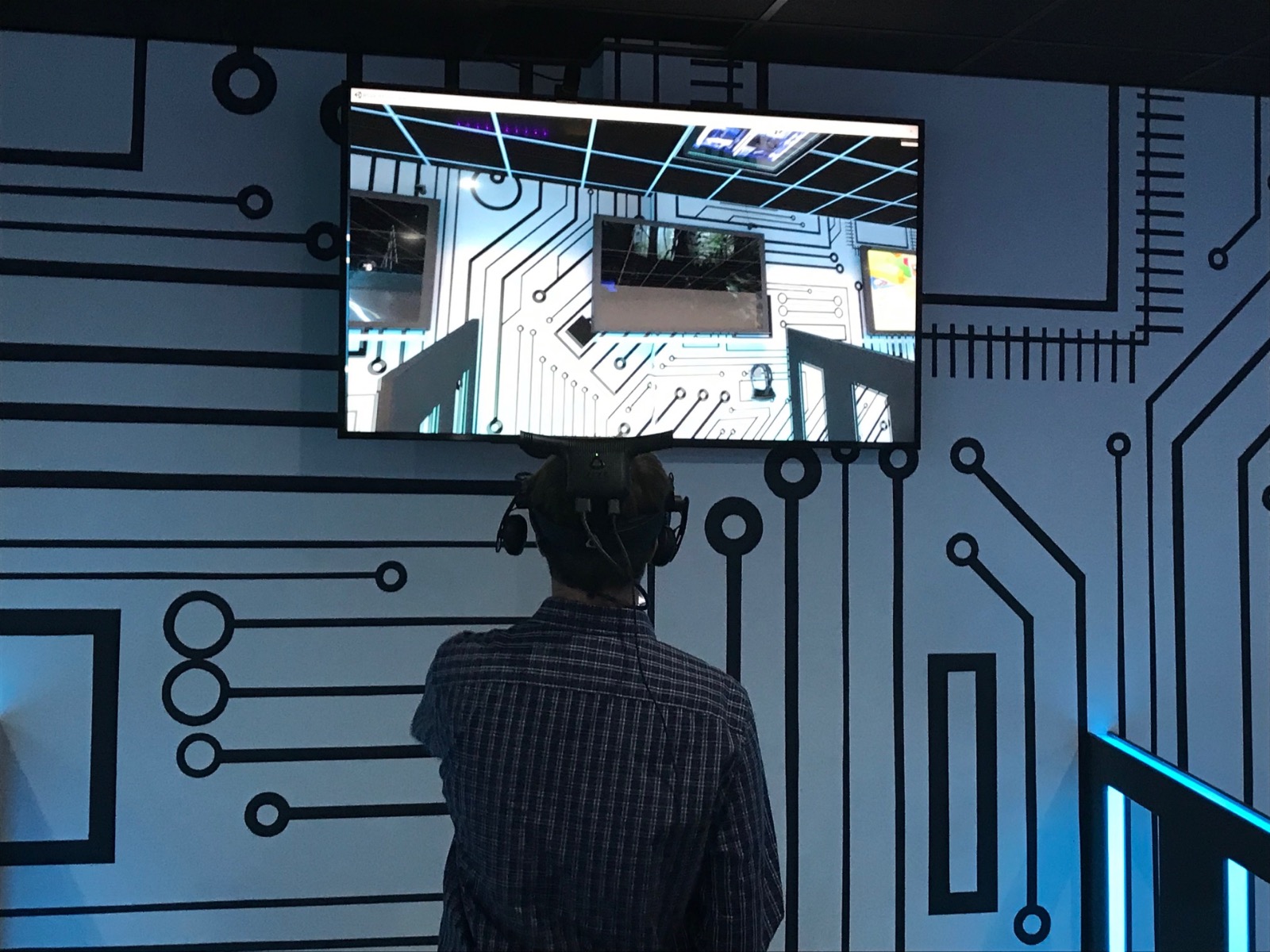 "Something like 85 percent of all architecture firms have fewer than 10 employees. So the amount of people doing that type of work is enormous, but not all of those people have firms large enough to afford the investment (of VR) or have people on staff that are capable in running this kind of stuff," Ryan explained. "We're hoping some of those people that might be able to take advantage of the technology, but don't necessarily have enough to make the initial investment to own it, can come to us and then have an ace up their sleeve when working with clients."

Whether for business or pleasure, the future has arrived with RSVR – or at least will arrive when the VR center opens at the beginning of 2020. The official opening date is Thursday, Jan. 2, but RSVR will host an open house on New Year's Day offering free 15-minute timeslots from 11 a.m. until 6p.m. to play around with the games and technology. After that, RSVR will be open in arcade mode Thursdays through Sundays from 5 p.m. until close, as well as available for private business reservations during the week. Reservations cost $60 per hour per four-person station (for example, a one-hour session for eight people would cost $120) and can be made online at RSVR's website.

And prepare yourself for an all-new high-tech experience – made in, for and by Milwaukee.

"We didn't want to be perceived as some company that came in from New York or L.A. or Chicago and bought some arcade," Ryan said. "This is all home-brewed. All of the stuff that we built in here is custom-built by local carpenters and a ton of people who contributed. All of the computers, we built locally. These were all hung by our local AV guys that we work with. This is really a Milwaukee-based company – so if we franchise out and have ten of these in two years, it'll be because Milwaukee's awesome."