Urban spelunking: Church of the Gesu

According to Marquette's William O'Brien, who as a student wrote a thesis on architect Henry C. Koch, Church of the Gesu, 1145 W. Wisconsin Ave., which celebrates its 125th anniversary this year, is "A Gothic church of French derivation ... purportedly modeled on the Cathedral of Chartes."

That makes it a perfect companion to the lovely St. Joan of Arc chapel – itself considered a beautiful example of pure Gothic architecture – which sits about a block west on the Marquette University campus. 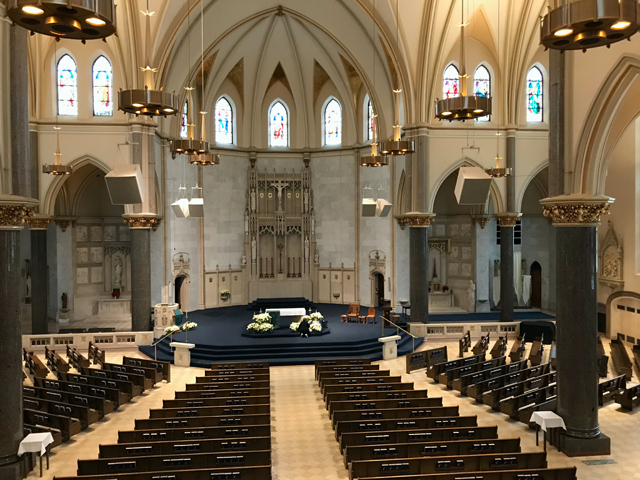 Koch, of course, couldn't have planned that, because the chapel didn't arrive here until well over a half-century later. 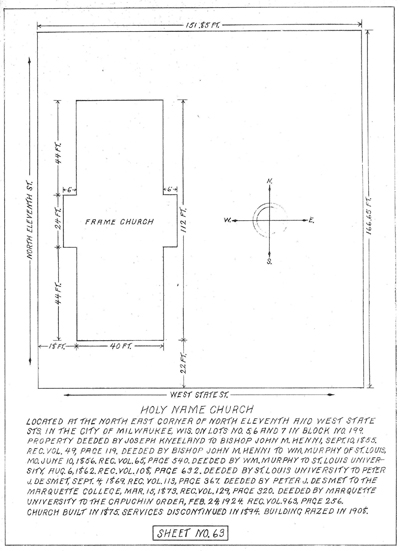 When it did get here it stole the title of the oldest church on campus from Gesu, the roots of which actually go much further back than its 1893-94 construction date.

The parish was the result of a merger between two other Downtown Catholic parishes – St. Gall (founded in 1849) on 3rd and Michigan, and Holy Name (organized in 1875) on the northeast corner of 11th and State Streets (see document at right, courtesy of the Archdiocese of Milwaukee) – that was discussed as early as 1887.

That summer, the Journal wrote, "It has been stated that the St. Gall's and the Holy Name congregations will be consolidated and that a new edifice is to be erected on the grounds of Marquette college, the square bounded by State, Prairie, 10th and 11th Streets. The buildings of the St. Gall congregation are said to be for sale." 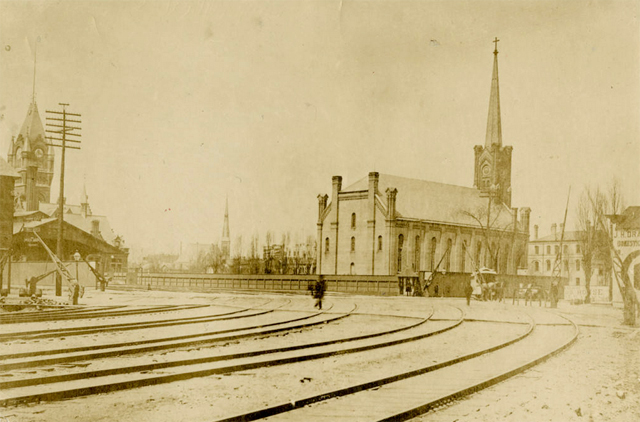 According to a historic preservation report prepared in 1983 for the church which was built not between State and Highland, as the news item above suggests was originally the plan, but on Wisconsin Avenue:

"The first years of St. Gall were extremely difficult because of poor administration. When Father Stanislaus Lalumiere was appointed to St. Gall in 1861, he was faced with a dwindling parish. By his dynamic leadership he developed St. Gall into the largest Roman Catholic parish in Milwaukee. During the 1860s he was responsible for rebuilding the boys school, starting a girls school, building a new St. Gall church and securing the charter for Marquette University in 1864, even though the college was not to open for 18 more years. He established the second Jesuit parish, Holy Name Church, in 1875 and was appointed president of Marquette College in 1887. It was during the 1880s that he began a campaign to unite the two Jesuit parishes into a single parish. He organized the subscription drive for the construction of the new church and supervised the architects in its design. The cornerstone laying ceremony for Gesu Church in 1893 was one of the major events in the history of the 19th century Roman Catholic Church in Milwaukee." 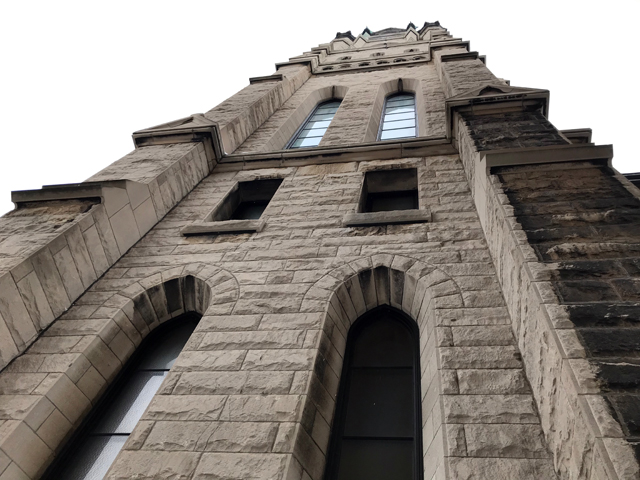 "Within a limited budget of slightly over $150,000 he was able to complete the present church within 20 months after the cornerstone was laid. The resulting Gothic style structure is sparing in its display of ornamentation both inside and out. The interior is divided into an upper and lower church with a seating capacity of 1,450 each. Among the significant interior features are the outstanding stained glass windows; the marble 'Pieta,' the only known sculpture of the noted 19th century Italian artist Giovanni Dupre in the United States; and the elaborate marble high alter designed by the Italian artist Vanvini and installed by Milwaukee architect, Alexander C. Eschweiler in 1927." 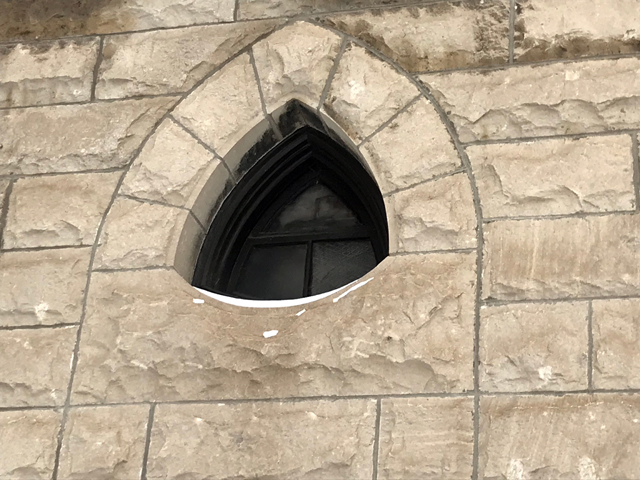 "Holy Name Church had been built on Koch's plans in 1885 ... Plans for the new structure were prepared by Koch. Circumstances changed and by 1892 the plans (to erect the church at 11th and State) were altered and (the church design) enlarged to fit the new building on Wisconsin Avenue. The cornerstone was laid for the church on May 21, 1893, with Herman Esser in charge of the construction site. When completed, Gesu Church, Gothic in style, was 'a monumental building of exceptional dimensions,' the second largest church in the northwest at the time."

The towers on Gesu soar to 225 and 252 feet and was built to accommodate 1456 worshipers on the main floor and another 500 in the gallery, according to Pajot.

O'Brien says that all 61 windows in the church – including the monumental 29-panel rose window – are Zettler's, installed, he suspects, in three phases, since there are three windows bearing Zettler's studio mark and typically one window in a grouping was marked. 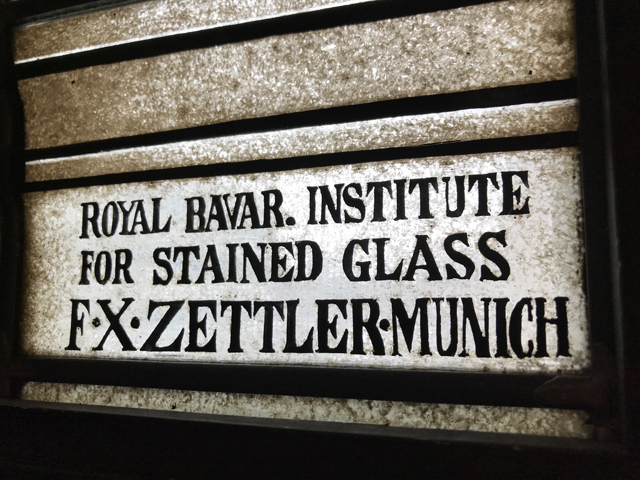 Zettler began his career in the studio of his father-in-law Joseph Gabriel Mayer. About a quarter-century after Zettler's death, his studio was merged with his late father-in-law's to create Mayer Studio.

The windows reflect Zettler's innovations in what has been dubbed the "Munich style" of art glass windows, created via a process that allowed for greater detail. Zettler and his team at the Royal Bavarian Institute for Stained Glass would paint their scenes on sheets of glass and fuse them together to allow for a broader array of colors.

Zettler's work typically made use of larger panels, with less lead tracery and what leading there was, tended to be more incorporated into the design of work, breaking it up less. 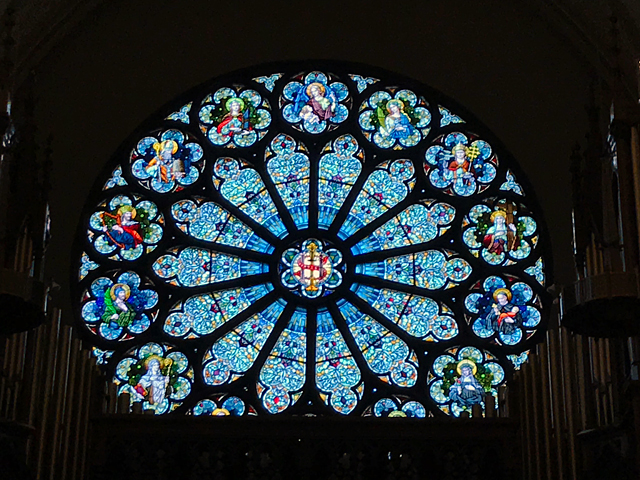 The day that John O'Brien took me on a brief tour of the church, he explained that in the 1960s as part of Vatican II's change in philosophy regarding church practices, the original pew arrangement was altered, the footprint of the altar was enlarged, bringing it closer to the congregation.

Some other changes over the years included the 1902 enclosing of the entry area via an enclosed, carved stone vestibule, designed by architect Herman Esser and technology upgrades, like installation of LED lighting.

The church also underwent a major renovation around 2010.

But what O'Brien seemed most enthused about is the organ, which many have said is the largest and best in the entire state.

"The organ was my first major project, and I come to find out that there was an organist who supposedly came here for the dedication in 1894, and told his mom that someday he wanted to play the pipe organ here," John O'Brien says. "Eventually, he became the director of music and principal organist, and he was here for 50-plus years. 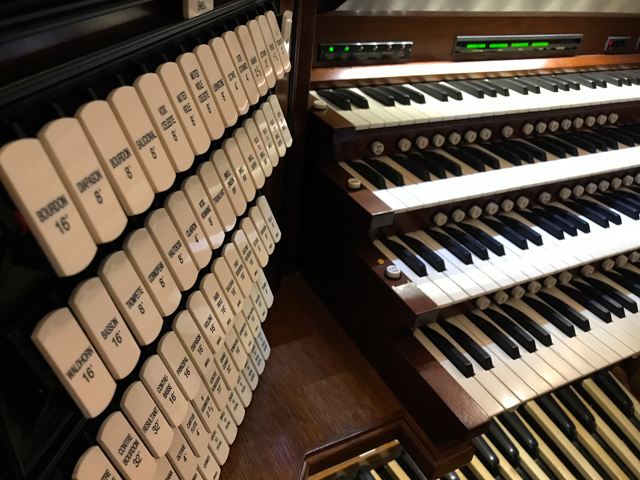 "His name was John Leicht. He was here and then he got to be caregiver and keeper of the pipe organ, and he did a major expansion of the instrument in the '50s. John Weissrock, who passed away last year and retired a couple years after we finished the final and most recent iteration of the pipe organ, was here over 30 years.

"So, if you're talking about 125 years, for 80-some years, there were only two guys here. And they were concert-quality organists, and this (organ) is what they aspired to. Our staff organist is a guy by the name of Dean Rosko. He plays at Miller Park, and he does other things. He is an organ enthusiast of the current generation. He is the enthusiast of enthusiasts, here. When John retired and we had an opening, he was just like, 'What do I have to do? I want this job'."

On Feb. 24, at 2 p.m., Rosko will demonstrate the Great Gesu Pipe Organ – which has more than 6,800 pipes – and talk about it in a lecture at the church that is part of the ongoing 125th anniversary celebration.

The organ, says O'Brien, was built by the Kimball Organ Company in 1899 for the Studebaker Theater in Solon Spencer Beman's Fine Arts Building, in Chicago, and purchased for Gesu by Father Thomas Fitzgerald in 1908. 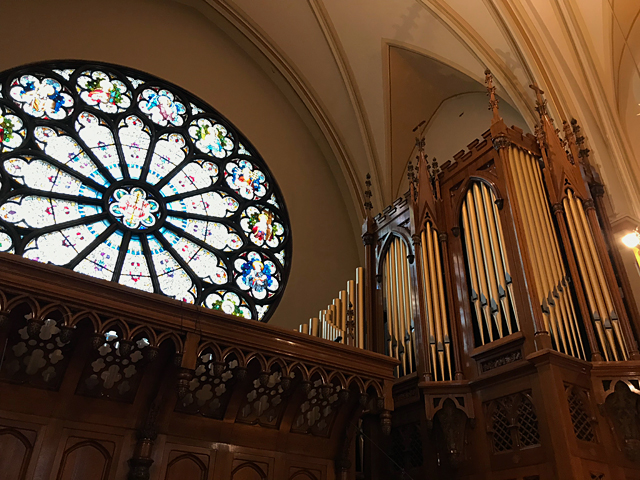 "In the early 1900s there were fires in theaters that they were attributing to the mechanisms and pipe organs sort of being decommissioned," says O'Brien. "Legend has it that the pastor at the time was familiar with this instrument, so he went down there and got it for a song."

The sale of the organ may have been part of the renovations undertaken by New York's C.B. Dillingham and W.F. Connor after they leased the theater in 1907.

The St. Louis-based Kilgen Company rebuilt the organ, adding pipes to the Kimball voices, in 1955

"The big thing that they added then was an echo organ, which is up front (near the altar)," says O'Brien. "There are louvers that open and close. You still play it up there (in the loft), and I kind of like to say it was surround sound ... You can balance this instead of tuning all the presentation music from up there (in the loft), (creating) concert quality on the acoustics in this space."

As part of the 2010-11 renovations, the Schantz Organ Company was hired to rebuild and further enlarge the organ. According to the Gesu website, "This is a new pipe organ which preserves the heritage of its predecessors ... by integrating a significant number of their pipes. The Kimball case was minimally altered by Schantz, however the non-speaking façade pipes were created anew. The main 20HP motor and blower were rebuilt. All other mechanicals and infrastructure of the organ were created new by Schantz."

Part of the new system is an innovative new blower room, says O'Brien.

"Humidity is a really big deal for an instrument that's made of wood and leather and these natural materials. Temperature, too, but really it's the humidity," he says. "So, we have a blower room up there and we were the first organ in the Midwest and one of the first few in the United States that implemented what's called a Mangel-style humidification system.

"The blower room is a clean air room. We filter all the air that goes into it. We control temperature and humidity and there are sensors in the instrument and if it finds particularly that the humidity is too low, it will kick on the blower at low speeds and it'll force out this air."

Now, says O'Brien, the organ has reached its apex at Gesu.

Gesu Church and Marquette University have a foundational connection and they remain intertwined in many, many ways, but John O'Brien points out that they two are separate legal entities. 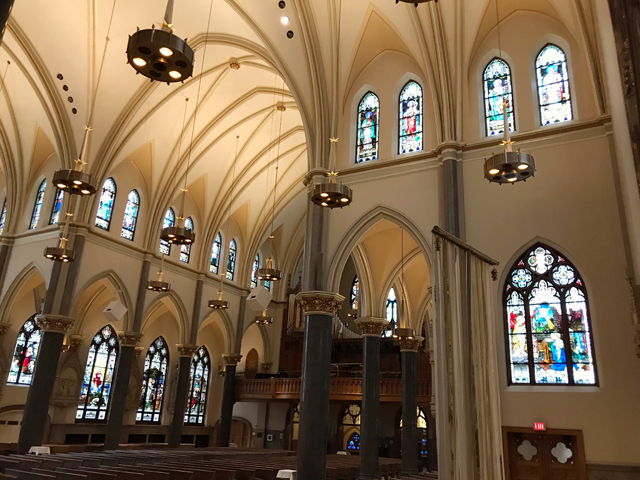 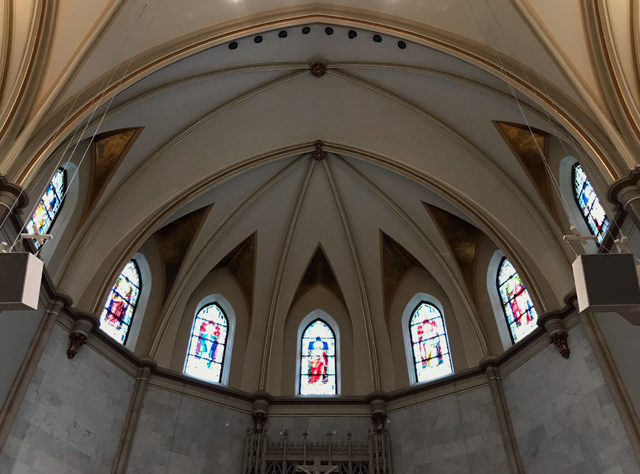 "But we have a very strong symbiotic relationship," he says. "I'd like to think the university couldn't get along without us, but I know we couldn't get along without them because of all the things, including IT infrastructure and phone systems, and all that stuff. We do graduations and stuff in the church, and we don't charge for that. Student chorus, student music groups perform in here. It's a really strong relationship."

Gesu was originally a neighborhood parish, created from two parishes serving Downtown residents, but now, much of that neighborhood is gone, displaced by the freeway. But, in a sense, it remains a neighborhood church and the university is its neighborhood ... sorta. 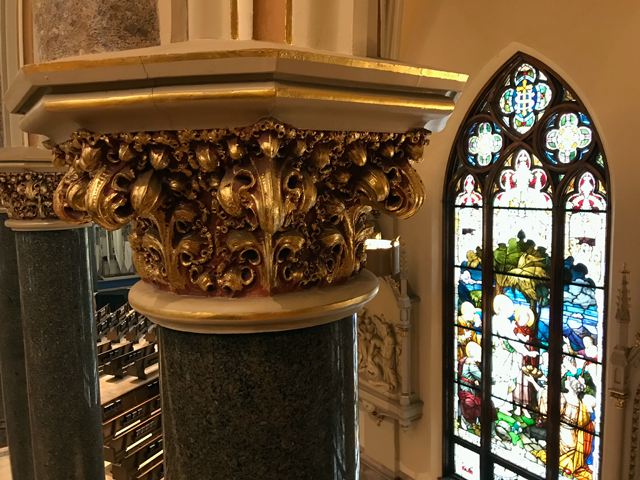 "We have about 1,300 registered parishioners," O'Brien says. "And those would be households, or member units. We have registered parishioners in Illinois – I had a trustee who lived in Madison – up to Mequon, Cedarburg, and some just down the road. So we have this very diverse geographically of what we draw from, which is building up to, we're a bit of a destination parish.

But many of those members first came to Gesu as students or staff or faculty at Marquette. And, says O'Brien, turnout at Mass is often tied to when school at the university is and isn't in session.

"Do we see attendance and all go up when the school year starts? Absolutely. Because the students are gone, and they come back. And all the sudden, there are things going on here, they're volunteering here, they're Eucharistic Ministers, and we see it go up.

"University staff is coming here during the school year, too. So we still have pretty good attendance, but it's very diverse. And when people are in town for things, this is the place they want to come. If you've been in the church, you know why."