I admit that I've had a love affair with the former Emanuel L. Philipp School, 4310 N. 16th St., since I first stepped inside it nine years ago. In fact, I was charmed before I even crossed the threshold.

Built in 1931-32 to plans drawn by Alexander Eschweiler – and originally designated Sixteenth Street School – Philipp is a beautiful amalgamation of arts and crafts and a sort of nature-driven Art Deco.

Philipp closed in 2006 and it has come up occasionally as a potential school site again, perhaps most notably a few years ago when it was floated as a potential home to a Rufus King International Baccalaureate elementary school program to feed King IB Middle School on Center Street and King High School, which is just around the corner.

Named for the 23rd governor of Wisconsin, who served from 1915 until 1921, the three-story red brick schoolhouse has a tower that projects at least another story higher. Outside, there's ironwork, leaded windows and terracotta tiles that depict scenes from nursery rhymes.

As I wrote after my first visit, inside, the office, the classrooms and the hallways are all outfitted in stunning woodwork. It's a sight to see, really. But the real jewel is the giant ground floor kindergarten room. You can enter through the cloak room with its rows of waist high coat hooks – each still has a child's name written on a slip of paper.

Then, along the east wall of the bright, airy room, is a beautiful fireplace, with a three-panel Tula Erskine painting installed in the wall above the mantle. Further along the wall is a really stunning tile fish pond set into the wall. About four feet long and maybe two feet wide, with a spigot on one end above the drain, it almost looks like a bathtub.

Some alumni recall fish swimming in that tub. Others remember the squirrels and other animals represented in sculptures that crouch up in the corners of the hallways, where the walls meet the ceiling.

Most of the decorative work, according to a historic designation study report compiled in 1988, was designed by Eschweiler and executed locally.

"The intent of the decorative program, as restated by the Eschweiler firm in the 50th anniversary publication, was to make this 'a school for children.' The program included whimsical penguin sculptures, imaginative carvings of Indians and exotic animals, silhouettes of children and depictions of children's stories, fables and legends. These were executed by local artisans including P. Schmidt and Company and the Badger Wire and Iron Works. P. Schmidt and Company were the contractors responsible for the cut stonework on the Philipp School including the extraordinary penguin balustrade and the bas relief approach walls."

In her handwritten resume, Milwaukee artist Tula Erskine claimed credit for the "children at play" mural in the kindergarten room. The preparatory version of that work is in the collection of the Urban Ecology Center. 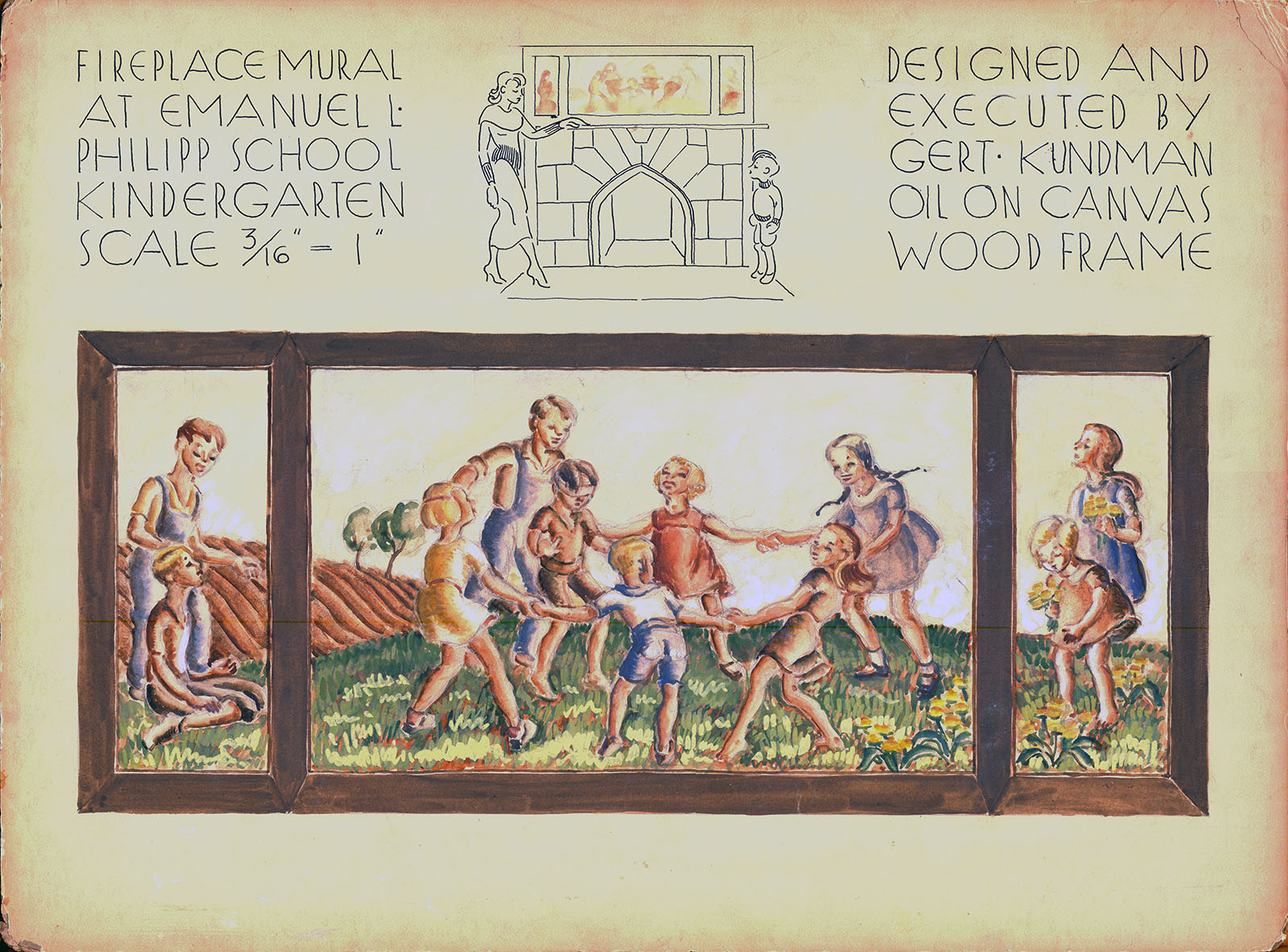 Here's how the report described the building:

"A playful fusion of sculpture and architecture sets this Art Deco style elementary-school building apart from other public schools of its era. The general massing of the flat-roofed building looks modernist in its geometric simplicity. Its abundance of high-quality, hand-crafted exterior detail work further distinguishes the structure.

"The school is composed of a three-story classroom block with a taller entrance tower at the north end and a one-story auditorium wing added in 1961. Brickwork laid in a modified Flemish bond pattern, imparts texture and richness to the wall surfaces of the North Sixteenth Street side classroom wing. Set into this brick background, and mostly on the entrance tower, is an extraordinary program of handcrafted ornament. Alongside the stoop outside the entrance, the low stone retaining walls are highlighted in bas-relief with a small menagerie. At the first-floor window sill level, terracotta panels depict children's-story and nursery-rhyme characters. Above the school entrance two corbels shaped like bears' heads support a balustrade of carved limestone penguins. Some of the school's interior also contains handcrafted ornamental features that continue the zoo and storybook theme."

On my most recent stop, I couldn't help but notice the stone retaining walls on the entry staircase are in rough shape structurally.

The walls, along with panels on the building entrance, have carved scenes on them, mostly depicting animals – though also some figures, including representations of Native Americans. And, sadly, the weather is wearing away those images.

So, I took some photos so that you can see them.

Squirrel and bunny inside 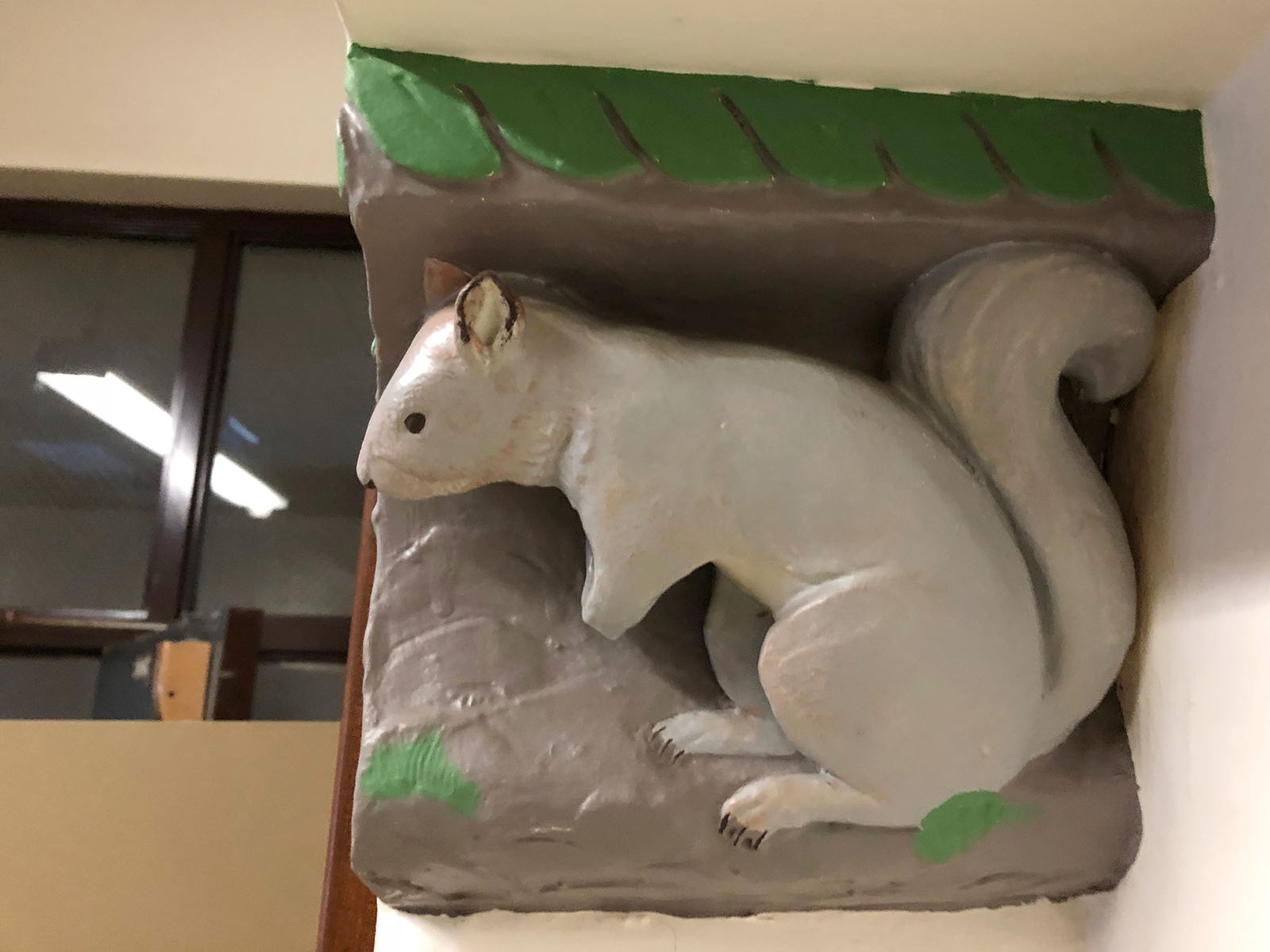 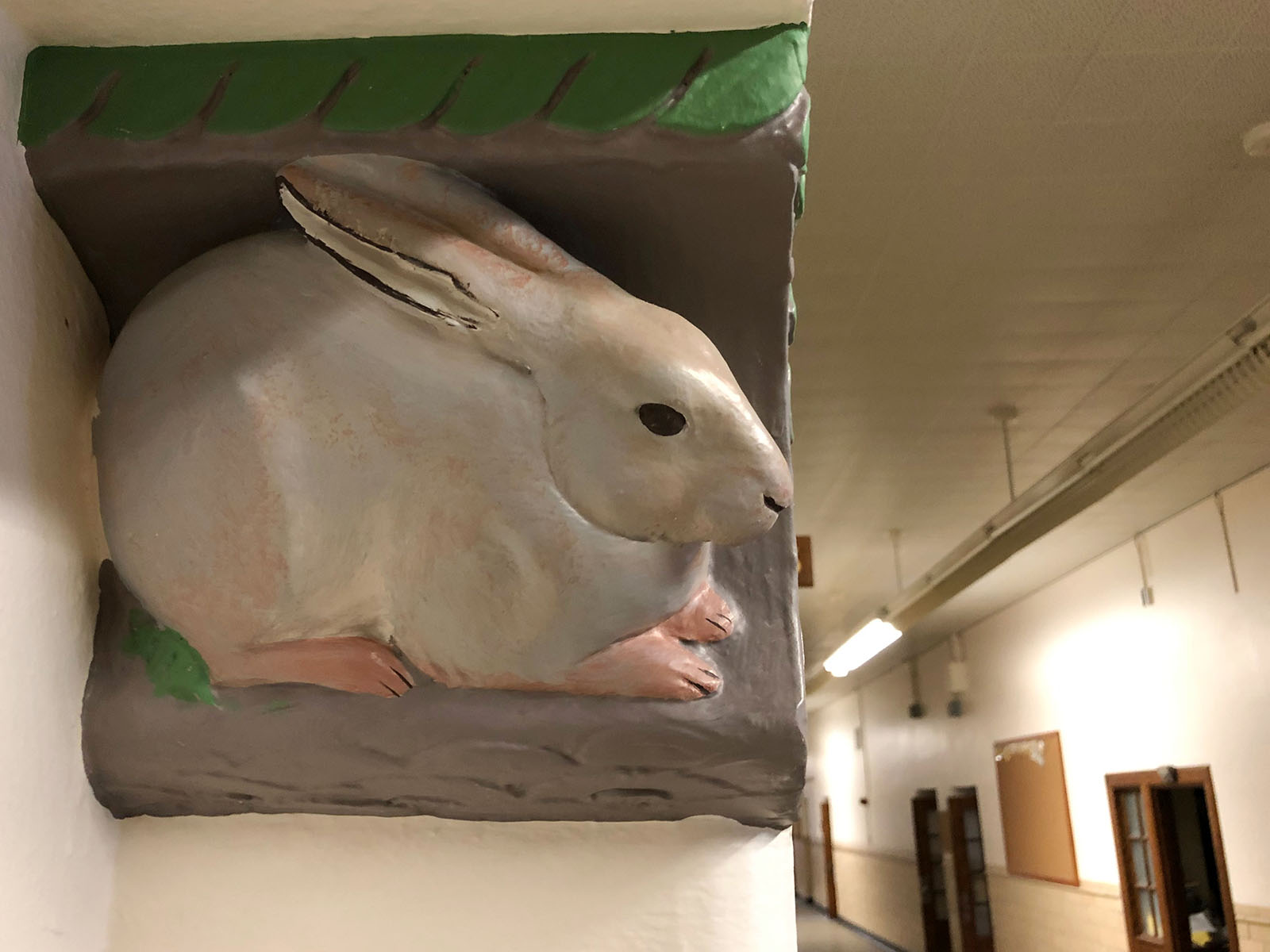 Fish, crowned and not 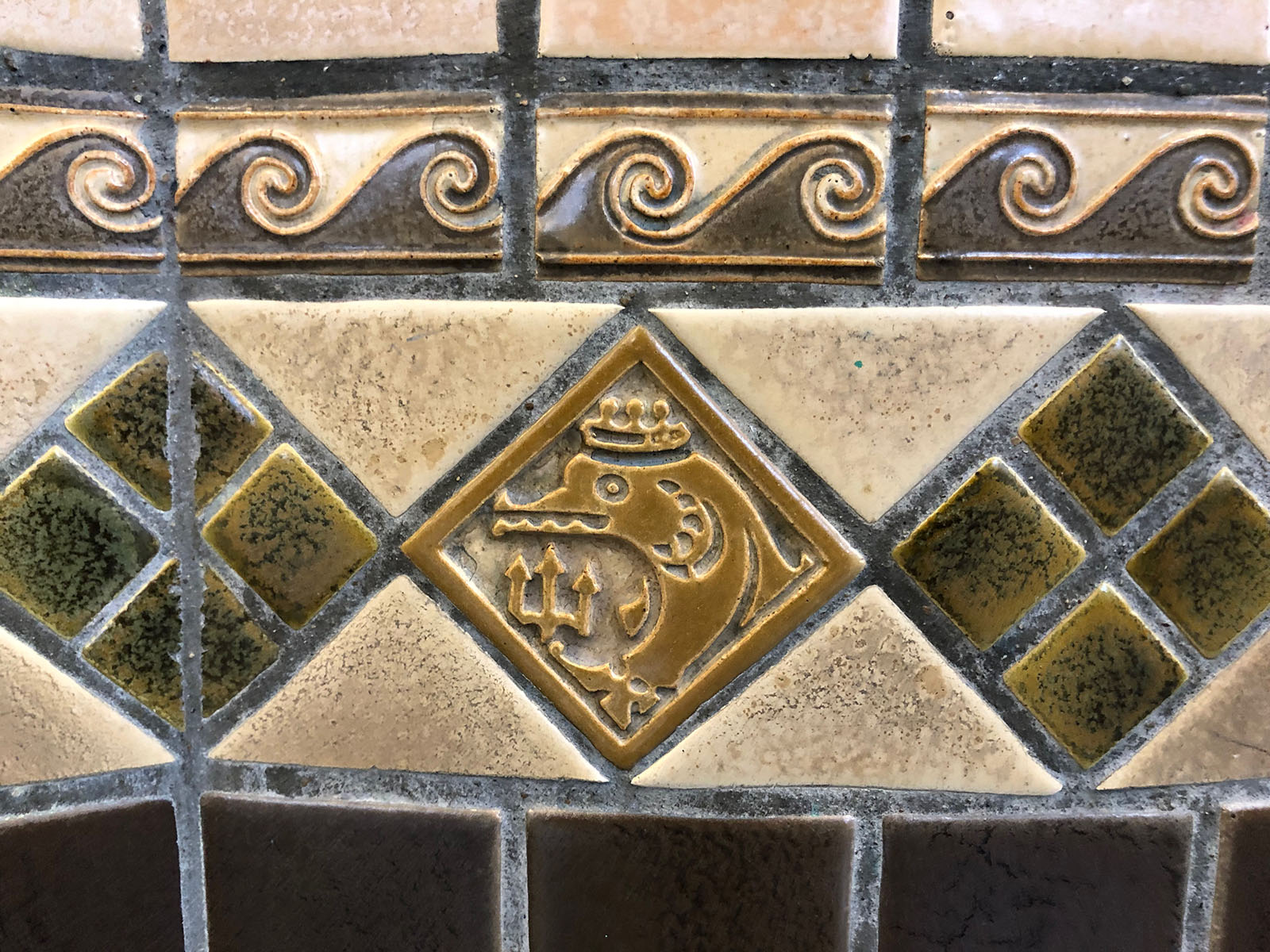 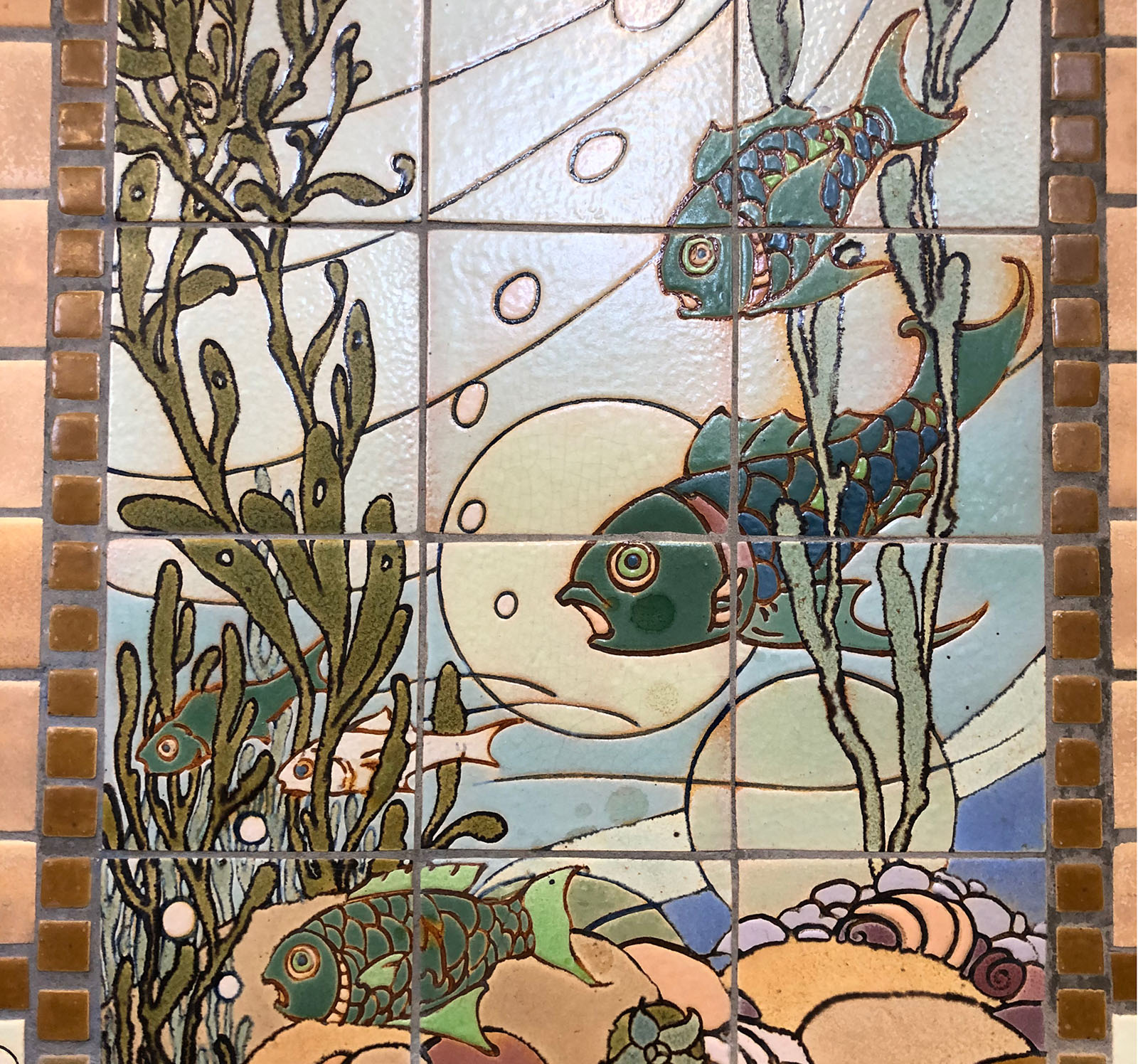