As the Milwaukee Ballet prepares to move into its new Third Ward digs – still under construction – in September, it is also beginning to say goodbye to its longtime Walker's Point home at 504 W. National Ave.

General Manager Anne Metcalfe says the building will be listed for sale in the first quarter of this year.

The move will be a somewhat bittersweet one for the Ballet, says Metcalfe.

"There's lots to love about the historic nature of this building," she says, nodding to the two-story cream city brick building's original use, which was as a South Side palm garden built by the Schlitz Brewing Co. 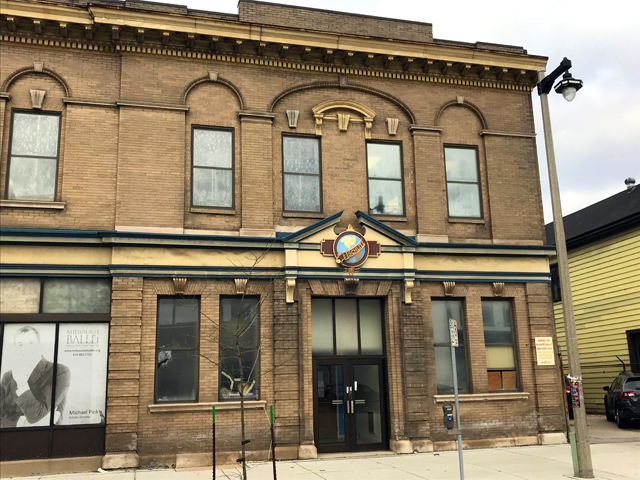 "Things that are less lovable are the noise, the shoes. For everyone on the lower floor here – people are dancing above – so all day, you've just got this thumping.

"Also, because part of our administration is at the back of the building (both upstairs and down) and part down here (in front). Just from a communication point of view, when we're in the new building and we're all together ... that will just make everything much more collegial."

The issues with the site, which the Ballet has occupied since 1981, are plain to see if you visit. The corridors are tight, the dancers' lounges are mere widenings of those corridors. Some of the studios have low ceilings, and, as Metcalfe points out, the locations and arrangements of the office spaces is less than stellar. Parking can be an issue, too. 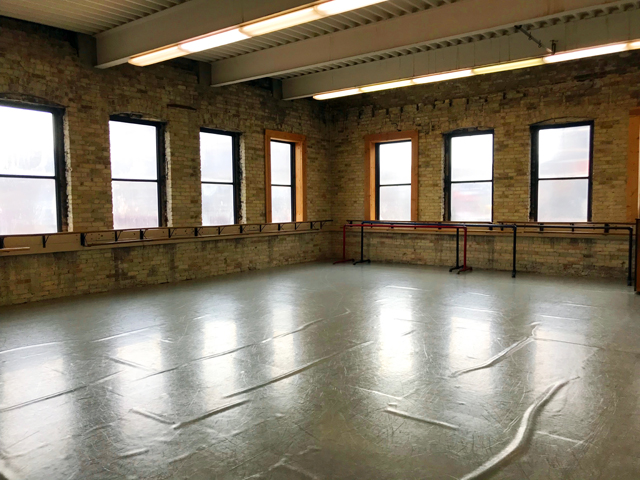 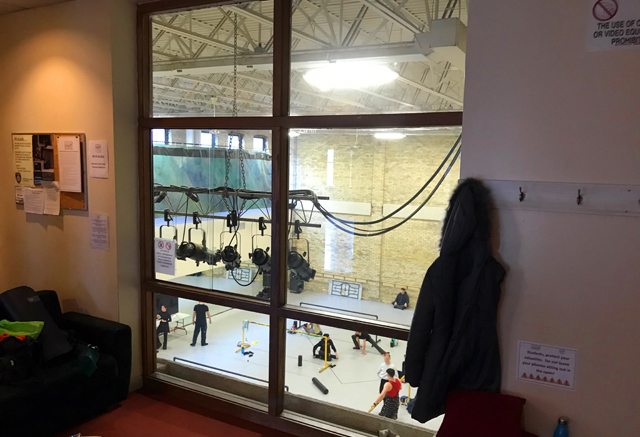 As for the new place, Metcalfe notes, "It's going to have a great big space so the staff and the dancers will all be together, and I think it'll just connect everyone in a way which isn't possible here."

In 1896, the Schlitz Brewing Company built its Palm Garden Downtown on the corner of 3rd and Wisconsin. The big, frond-bedazzled beer hall attached to the Schlitz Hotel proved extremely popular so it made sense that the brewer that helped make Milwaukee famous would seek to recreate its success on the heavily German South Side.

In May 1901, newspapers shared renderings, drawn by Charles Kirchhoff – Schlitz's preferred architect, who also drew tied houses and other properties for the brewery – showing the exterior and interior of the Neoclassical building, on the northwest corner of Grove (now South 5th) Street and National Avenue. 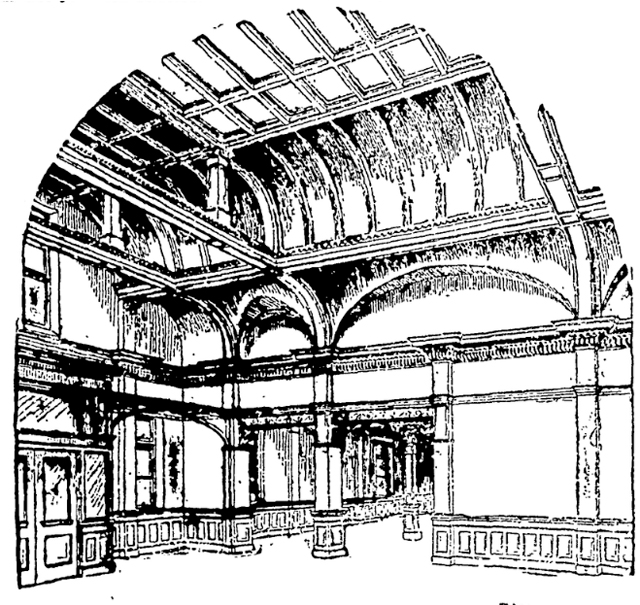 "The new building will have 115 feet (of) frontage and there will be three storefronts on the National Avenue side," wrote the Journal. "The cafe faces on Grove Street. This will be over the barroom. The basement will consist of bowling alleys, barber shop and storerooms.

"The interior, in the bar and cafe, will be cabinet work, gilding, hand carving and floors of tile. The altitude of the cafe dome is 30 feet. Cathedral glass will be used inside and plate glass in front. The exterior of the building will be of pressed brick, with Bedford stone trimmings. ... The second floor will consist of offices and a hall which will be rented out for weddings or any kind of entertainment. The Schlitz company has given up the theater idea.

"The new palm garden will equal the Third Street resort in its appointments." 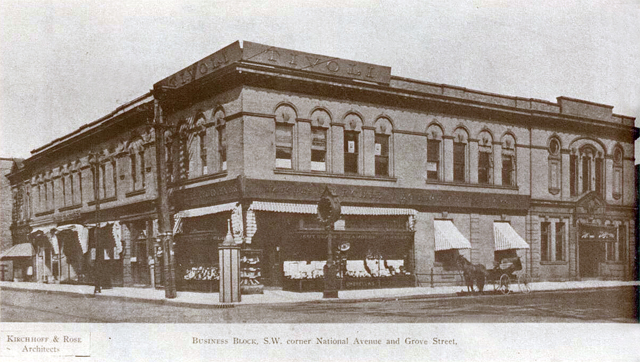 Previous buildings on the site were soon razed and work began. Though it didn't have a name at this point – though "Walhalla" was suggested – by the time it opened later in the year, the new place was dubbed the Tivoli Palm Garden.

Photos of the popular German Jahrmarket street festival that enlivened Grove Street in the early years of the 20th century – and whose organizer E.M. Maxwell kept the event's offices in the Tivoli building – offer tantalizing glimpses of the building's exterior, dotted with signage. 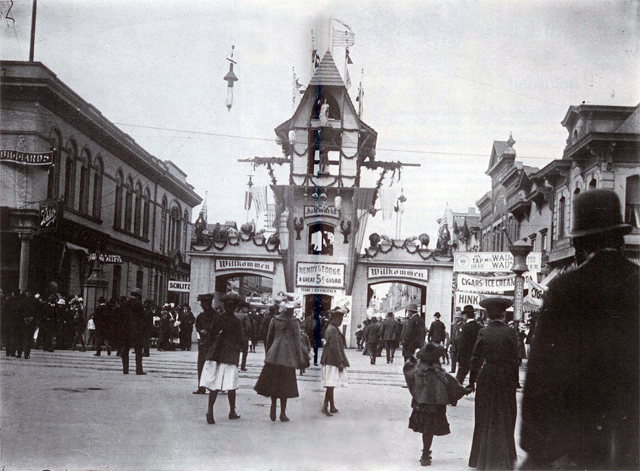 According to a booklet published to celebrate the Ballet's arrival at the building, the Tivoli was "very lavish. The romantic setting was created by colorful murals depicting visions of a tropical paradise. A magnificent 30-foot dome crowned the effect.

"The palm gardens enjoyed great success, and various concert bands were heard nightly until Prohibition and anti-trust laws combined to close the doors. The structure was then utilized for a series of stores and as a warehouse and storage area." 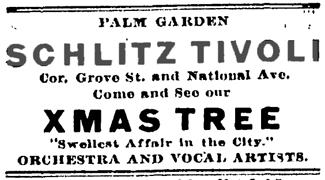 Soon after it was completed, Schlitz was already tinkering with the place. In 1905, the upper floor office space was reconfigured and within just a few more years, the storefront spaces began to be regularly altered in size to accommodate various clients.

At this point, Charles Schmidt and his brother Louis appear to have run the Palm Garden in the building, as well as the bowling alleys below. In 1905, the two made the newspaper when Charles was fined $10 for "assaulting his younger brother ... in a row over the management of the bowling alleys."

Their partnership may have been tenuous because by 1908 Harry T. Bentley, dubbed "a popular chef" in one newspaper report, returned to his native South Side Milwaukee from a stint at the Hoffmann House in New York City to take over operations at the Tivoli Palm Garden from George Schirmer, who also ran the Tivoli buffet in the building.

"The interior of the building will be thoroughly overhauled and converted into a first-class restaurant with regular meal and comprehensive a la carte service," the paper reported.

In 1906, Archie Tegtmeyer leased a first-floor space for 10 years to move his jewelry store into the building from its previous location on 5th Street.

In '29, English Woolen Mills occupied a two-story space in the building and in '31 a billiards hall was on the first floor. 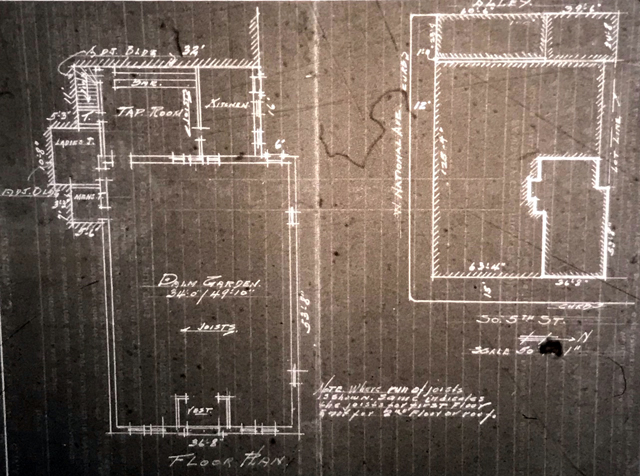 A 1934 floor plan in the Department of City Development archive.

By 1934, a year after the end of Prohibition, the original cafe space facing 5th Street was again operating as a "palm garden" with a small tap room and kitchen attached to the tiled hall.

Around the same time, the Fifth Ward Progressives moved into part of the former woolen mills store to run political campaigns, and Anna Turcek operated a tavern one storefront west of the corner space, facing National Avenue. 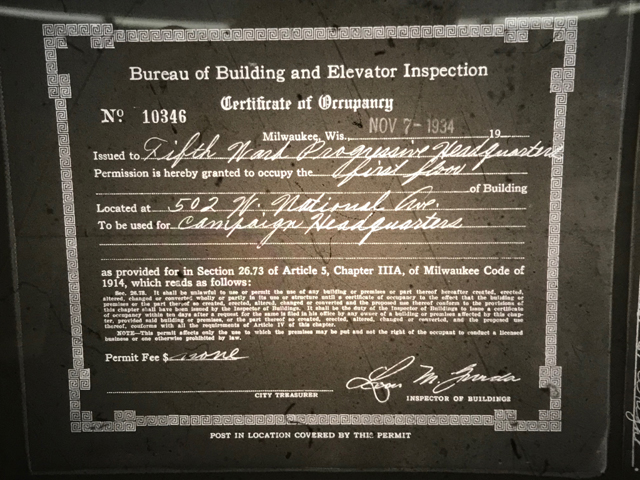 Across the years, the building was home to a menswear store, a cigar shop, Wing Chee Wong laundry, sales and storage for the Ingerman industrial equipment company, a cigar manufacturer, a novelty store, a tile contractors' showroom, a clothing factory and, lastly, Attorney Francisco Camacho's Job Service Work Incentive Program, which had offices and classrooms upstairs and on the west end of the first floor.

About 100 firefighters – with 14 engines, six ladder trucks, a rescue squad, a mobile hospital unit and a chemical foam rig – battled a blaze that started in the basement as windchills tumbled below zero. 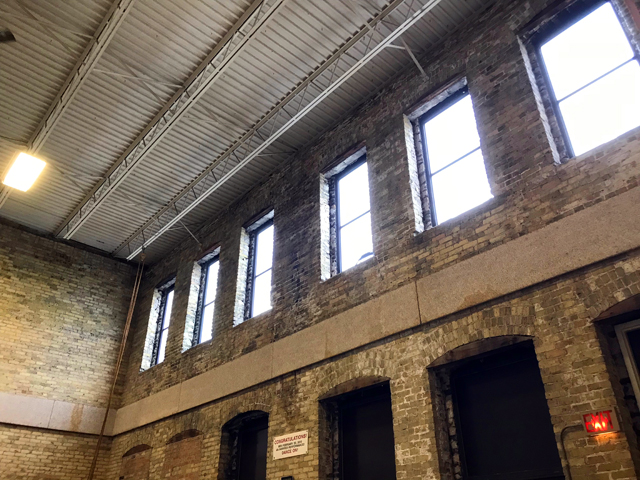 In the end, the former Tivoli Palm Garden was a burned-out shell of a building. As the city launched the process to condemn and raze the building, the Historic Walker's Point preservation group stepped in to help save it.

In 1980, Madison-based Carley Capital Group bought the building and announced it planned to spend $1.1 million to renovate and restore the building, with an eye toward a first-floor restaurant and other tenants.

By September 1981, Brust-Helke Design had worked to bring the building back and the Ballet, which had been occupying space in the Carpenter Building at 6th and Wisconsin (home of the Wisconsin Theater and the Rooftop ballroom), had agreed to move in. 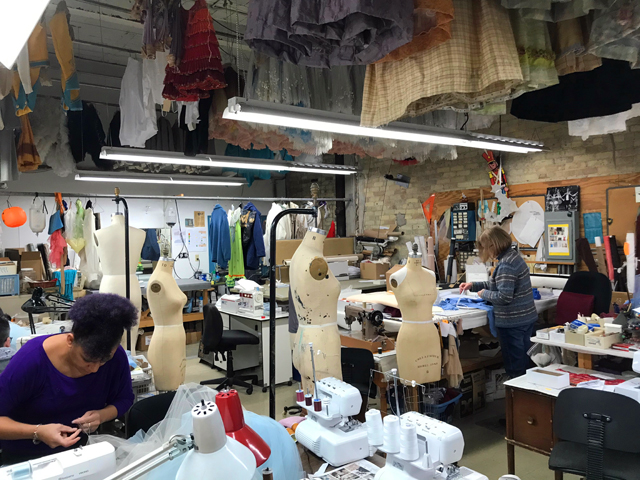 The Ballet costume shop (above) and laundry ... do not
put the tutus in the washing machine! 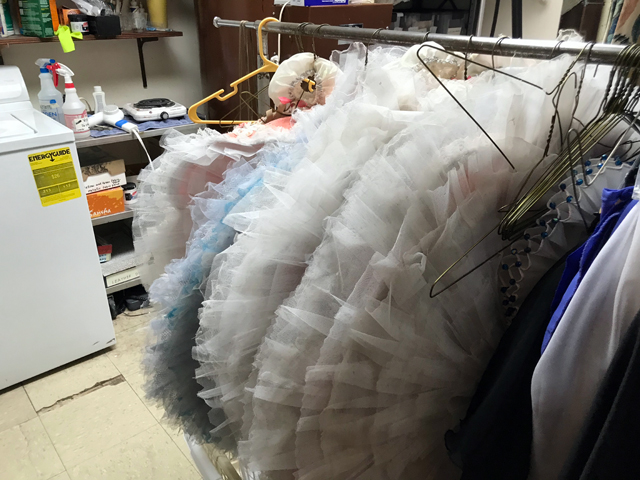 About $600,000 was spent to make the building suitable for the dance company's needs, according to contemporary news reports.

"The whole inside was full of debris," principal architect on the project, Mark C. Herr, told the Journal at the time. "It was hard to believe it could ever be salvaged and made into ballet studios. We had structural engineers examine it, but we couldn't get through to verify the footings of several columns until all the debris was out. Plans were contingent on examining the columns.

"Actually, it worked out very well. The only tricky part was having to erect steel columns to support the exterior walls."

These days, the only real sign that the building was once a Schlitz building is the brewery medallion that still stands above the cafe/palm garden entrance on 5th Street. But Brust-Helke did work to preserve what it could of the building's history, mostly on the street-facing walls.

"The exterior was in remarkably good shape," Herr told the afternoon paper. "I had expected the worst, given the industrial area around it and the fire. But because of the craftsmanship when the building was built – the very hard-face brick and fine, narrow mortar and joint work – the exterior was not too damaged." 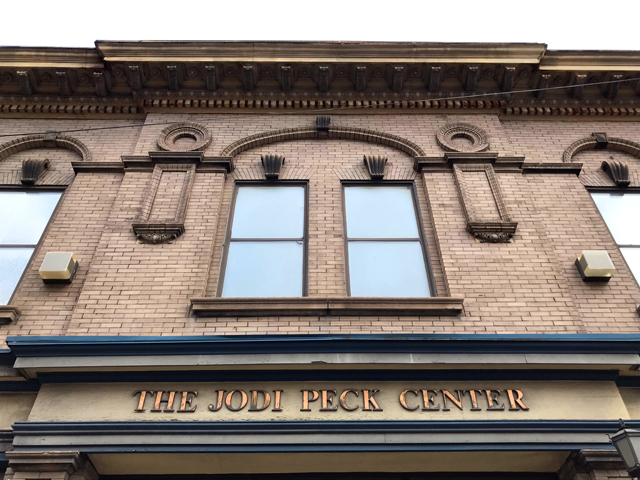 That meant that masonry detail could be preserved and restored. A missing section of molding above the first floor was recreated from what remained and the cornice survives, too.

That Schlitz medallion, ironically – since it's still there – was actually the most damaged feature on the exterior. Herr told the paper that part of the globe and scroll were missing and had to be replaced. 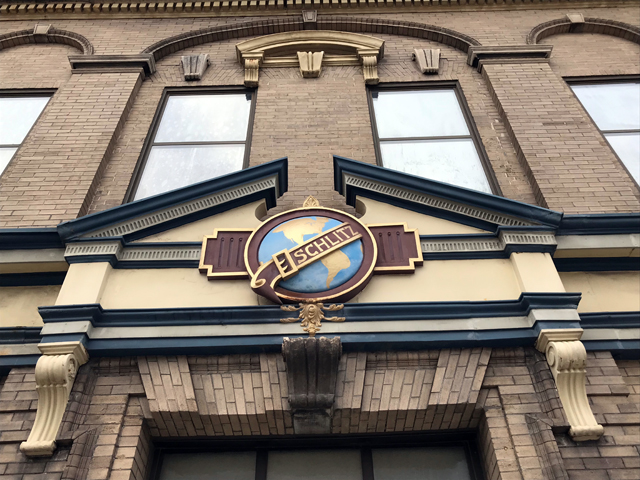 Despite the fire and the odds against it, the Schlitz Tivoli Palm Garden has long outlived its Downtown predecessor, which was razed for a parking lot in 1964 and now sits buried beneath The Shops of Grand Avenue.

With the building for sale, it's hard to say.

The Ballet would like to find a new owner that will be an asset to Walker's Point, but, as a nonprofit, it is also forced to keep an eye on the bottom line, says Metcalfe. 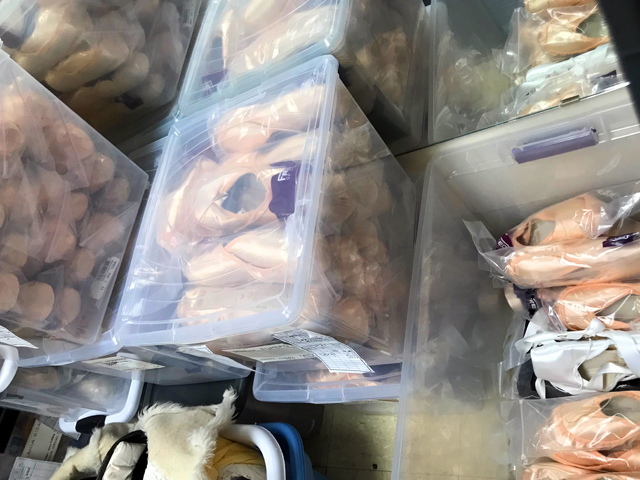 "I would hope that with the Walker's Point Association and Cristian Vega, who started the 5th Street Fest, that this area will just become even more vibrant," she says. "I hope it's someone that is going to put roots into the community and invest in the community. I think that would be great, but I think we would also obviously value someone who's going to pay us a good amount."

Even though it will no longer be headquartered in Walker's Point, Metcalfe stresses that the Ballet intends to maintain its own deep roots in a neighborhood to which it committed long before there was any sign of the current Walker's Point "renaissance."

"We're not moving up," she says, "we're just moving over. We have a scholarship for 53204 ZIP code, and that is something we'll carry with us. We've got really good neighbors and friends here so we don't want anyone to feel like we're walking away from Walker's Point. It is absolutely not about that."