The Monster Jam Triple Threat rolls into the Fiserv Forum this weekend for three shows and a special "Pit Party."

This new Monster Jam show challenges the athletes in their abilities to handle trucks, ATVs and Speedsters. Ami Houde is one of the eight athlete drivers competing in the show and one of only two women in the group.

"Motorsports have been male-dominated for decades, but it's 2019 now and we are kicking those boys' butts," says Houde. 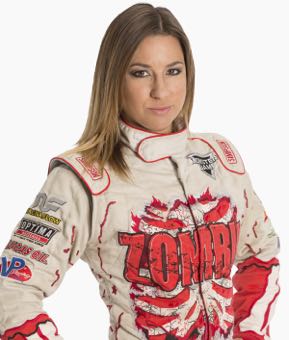 Houde's vehicle is named The Zombie and has been a fan favorite during the tour so far.

"The Zombie looks like a big, scary zombie and fans – especially kids – love it," says Houde. "There's nothing more surreal than seeing an arena full of people doing 'zombie arms' at me. The interaction with the audience is my favorite part of the job."

Houde started her career riding on two wheels at the age of 2 when her dad got her on a dirt bike.

"That's where my need for speed and adrenaline started," says Houde, who grew up in Winnipeg, Canada.

She competed in women's pro motocross events for a few years, but then went to a Monster Jam event in Winnipeg and knew that was her next career move.

"They lit up the arena like nothing I had ever seen before. I immediately fell in love with Monster Jam," she says.

Houde has been with Monster Jam for three years and says it's a natural fit. "I have a big, bold personality and this is a big, bold sport," she says.

Monster Jam Triple Threat is an interactive experience with audience members voting via their phones for their favorite drivers. Fans also have the chance to meet the drivers and get up close and personal with the trucks on Saturday, Jan. 20 at 10:30 a.m. during a "Pit Party."