The weirdest national days in the month of June

Ever feel like there's a random national celebration for every single day of the year, hashtagging its way across Twitter and giving publications excuses to list things? (*tips cap*) Well, that's because, according to the National Day Calendar website, there is often a plethora of random celebrations packed into just one 24-hour period.

Some of them make sense. National Doughnut Day on June 7? Don't mind if I do! Juneteenth on June 19? A noble cause if there ever was one. National Gingerbread Day on June 5? Seems like that's about six months too early, but sure, why not. But some of them are just bonkers, either obviously contrived creations or merely evidence that the shady Illuminati society behind all these national days might have too much time on its hands.

Here are the 10 weirdest days you can technically celebrate in the month of June.

According to the Secret National Day Illuminati Society, in its typical annoyingly vague and ill-defined way that I think is supposed to be meaningful, National Repeat Day could be either bad or good. Let me resolve that for you guys: It's bad. Want to know why?

According to the Secret National Day Illuminati Society, in its typical annoyingly vague and ill-defined way that I think is supposed to be meaningful, National Repeat Day could be either bad or good. Let me resolve that for you guys: It's bad. Want to know why? Well, did you enjoy reading the same stuff over and over just now? Did not think so!

Just listen to the things they recommend for today. Washing the dishes twice – because everyone knows that's so much fun to do just once. Making the same meal for lunch and dinner? What a boring and tiresome existence! Watching the same movie twice? What sociopath would do that? The National Day Calendar recommends "Groundhog Day" – you know, that movie about a guy doomed to an existential nightmare of doing the same thing over and over again until he's literally driven off a cliff. As for what the Illuminati DOESN'T recommend repeating on this most special day, it suggests not repeating a root canal or ... Hurricane Katrina. Keen advice: Don't do Hurricane Katrina again today, everyone.

Because nothing says "celebrating those who are single but by no means sad or solitary" by naming the national holiday after the derogatory term they've been called for centuries. And look at the photo the National Day Calendar uses to promote the special day: 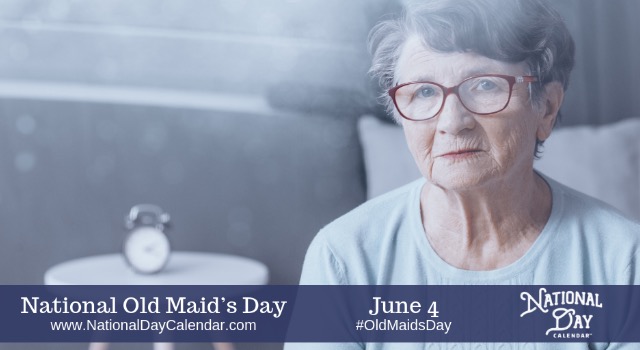 Could you have found a sadder, lonelier image for your national day of celebrating empowered and independent women who actually aren't sad and lonely? Nice touch putting the clock on the table behind this woman – because in case the grey monotone and concerned look of someone about to hear bad health news weren't enough to get you in a festive mood, what about a symbol of the cruel, unyielding passage of time?! SOMEONE FETCH ME MY CHAMPAGNE AND PARTY HAT!

Celebrate by with that classic VCR tradition: trying to scroll the magnetic tape back inside the cassette after the machine attempted to eat it, then watching both tapes of "Titanic" with an awesome foot-wide static bar in the middle of the screen.

The National Day Calendar says that this day is dedicated to making a choice or decision ... but that's boring and vague and could apply to literally every day of your life. So let's follow the true spirit of National Name Your Poison Day – aka spirits! After all, this particular national day is named after the famous bartender idiom, asking you to name your poison, and so I will: cherry bombs. And ricin.

As one who just yesterday spilled an entire quart container of pot roast soup across MULTIPLE kitchen surfaces and once managed to overcook lasagna so bad that the noodles actually melted into a clear goo, I have no idea who this national day could be for. Also, unrelated: Does anyone know if it's OK to eat a Hot Pocket burnt so bad that it looks like a charcoal briquette – both inside and out? Asking for a friend who may or may not write a monthly column about weird national days.

6. National Hike with a Geek Day

The best part of this national day is when your geek hike partner, taking some time out from behind the keyboard for a bit, gazes out at the beautiful natural splendor in front of their eyes and says, "Wow, this looks almost as good as 'Red Dead Redemption 2.'" And then you both get mauled by a cougar.

7. National Day of the Gong

First of all, "Day of the Gong" sounds like this is a horror movie about a gong rising up against those who mistreated it over its life. I can even see the tagline: "For years, they whacked the gong with a mallet. This January, it hits back." Second, the gong, at least in Western culture, isn't exactly considered the instrument with the most musical range – somewhat of a one-hit wonder, quite literally. But then again, just listen to this video clip and try not to feel your brain leaving your body for another plane of existence.

Celebrated on the Saturday after the Summer Solstice, Summersgiving is a holiday dedicated to cooking up your favorite traditional Thanksgiving foods – turkey, cranberry sauce, etc. – but in the summer. So basically it's just Thanksgiving for impatient people and without the historical context.

Honestly, the idea of a second holiday based around gathering people together to give thanks for what and who they have in their lives is not a bad one – but why not give Summersgiving its own dishes rather than ones that are already married to another special day and are more suited toward a hearty, warm fall meal? Then again, you put a heaping bowl of mashed potatoes and gravy in front of me, I'll make that stuff disappear whether it's January, July or whatever months they have on Jupiter.

No, this isn't a tribute to Dallas Cowboys great Leon Lett. Instead, National Leon Day (or "Noel" spelled backwards) is meant to celebrate that we are officially only half a year away from Christmas. Just three days after Summersgiving!? Damn, even fake Thanksgiving can't exist without Christmas trying to steal its thunder.

Anyways, you're supposed to spend this national day planning out and beginning your handmade gifts for the holidays – or, as it actually goes, figuring out what you want to make for a loved one, forgetting about it for the next six months and then just getting the person "Deadpool 2" on DVD. Again.

For those not in the know, OOTD stands for Outfit of the Day, meaning this national day is dedicated to people standing in front of a mirror and taking a selfie. Finally – an excuse for people to post about themselves on social media! Normally everyone's so reined in and modest on the internet, so clearly today will feel like a VERY different day. Oh, plus it's Social Media Day. As if everyday in our current existence isn't Social Media Day.

Conveniently, it also turns out to be National Meteor Watch, which considering all this insufferable social media nonsense, I will celebrate by hopefully watching a meteor crash into the planet.