You know those clever messages you read on the freeways, telling you to put your phone down or to buckle up? They all start in a conference room at the Wisconsin Department of Transportation inside Milwaukee's Intermodal Station. Staff huddles for a brainstorming session every few months, bringing together the DOT's creative and communication team, along with law enforcement and traffic engineering.

It's serious business to drive home the message of safe driving, even though the boards, themselves, get a little light-hearted.

Jon Riemann, the Communication Manager for Bureau of Traffic Operations, is the guy taking notes. "We try to have some fun with it," he says, although the topics are meant to make a point. "We're trying to impact driver behaviors here. We're trying to get people to, in some cases, change their behavior. Hands on the wheel and leave the distractions behind. It's a very important safety focused message that we're trying to come up with."

But just because the message is straight forward doesn't mean the staff can't get creative. During Academy Award season, the DOT put up a board that read, "No Oscar for best leadfoot. Slow down." For the Super Bowl, they did "Huddle up before the big game. Plan a sober ride."

And on May 4, Riemann, himself, came up with "Han says Solo down."

The technology is called the Dynamic Message System, and it has very specific rules, says Riemann. "This is worse than Twitter," he says. "Most of the boards, the maximum message is three lines of 21 characters, and that includes spaces, so the messages have to be very short."

In other words, the copywriters have to keep their message short and sweet, because they don't want their message to drivers to, well, get distracted by them.

Says Riemann, "We're looking at seven words or less, and it has to be an idea. It's not something you really have to think about." 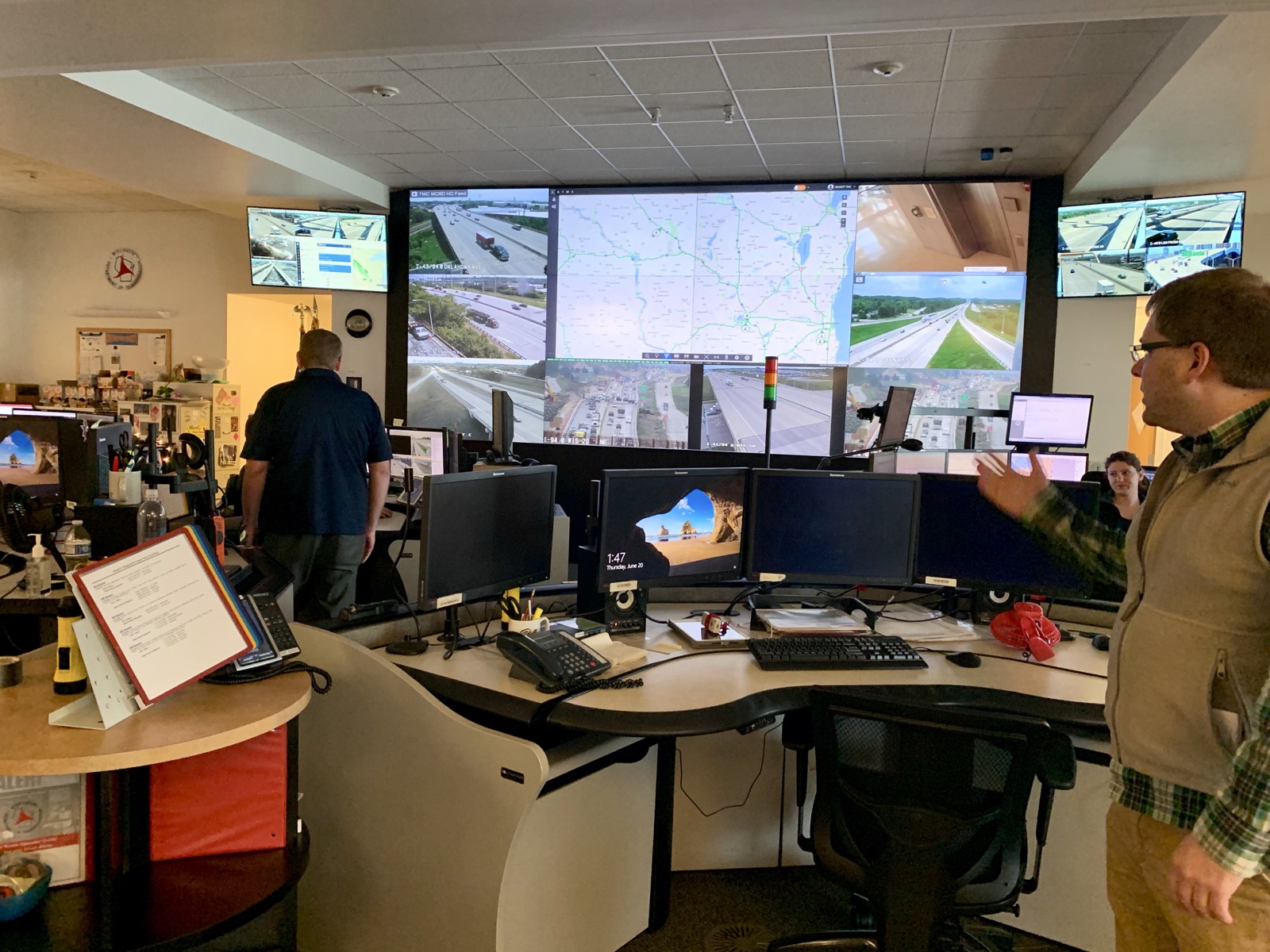 Approximately 150 boards are placed throughout Wisconsin, and the terminals used to load up the messages reside in the traffic control center, which looks like a war room in a movie. A handful of staff is monitoring the traffic on some 400 cameras, 24/7, and most of the time, they are putting out specific messages about lane closures, construction and Amber Alerts. The PSAs fill in what's left.

"Other states do this, as well, and so we do talk to our counterparts in Minnesota and Illinois and Iowa," says Riemann. "Nationally, when somebody writes one that's really clever, and it makes national news, there are a number of us who communicate back and forth. Most states have that same structure, so we do share and try to reuse things that come from other places."

With each new construction project, boards are updated to be more readable. Some now have full color displays, which allows the staff to better communicate traffic hazards. For the PSAs, Riemann says he is always looking for new ways to resonate with drivers. 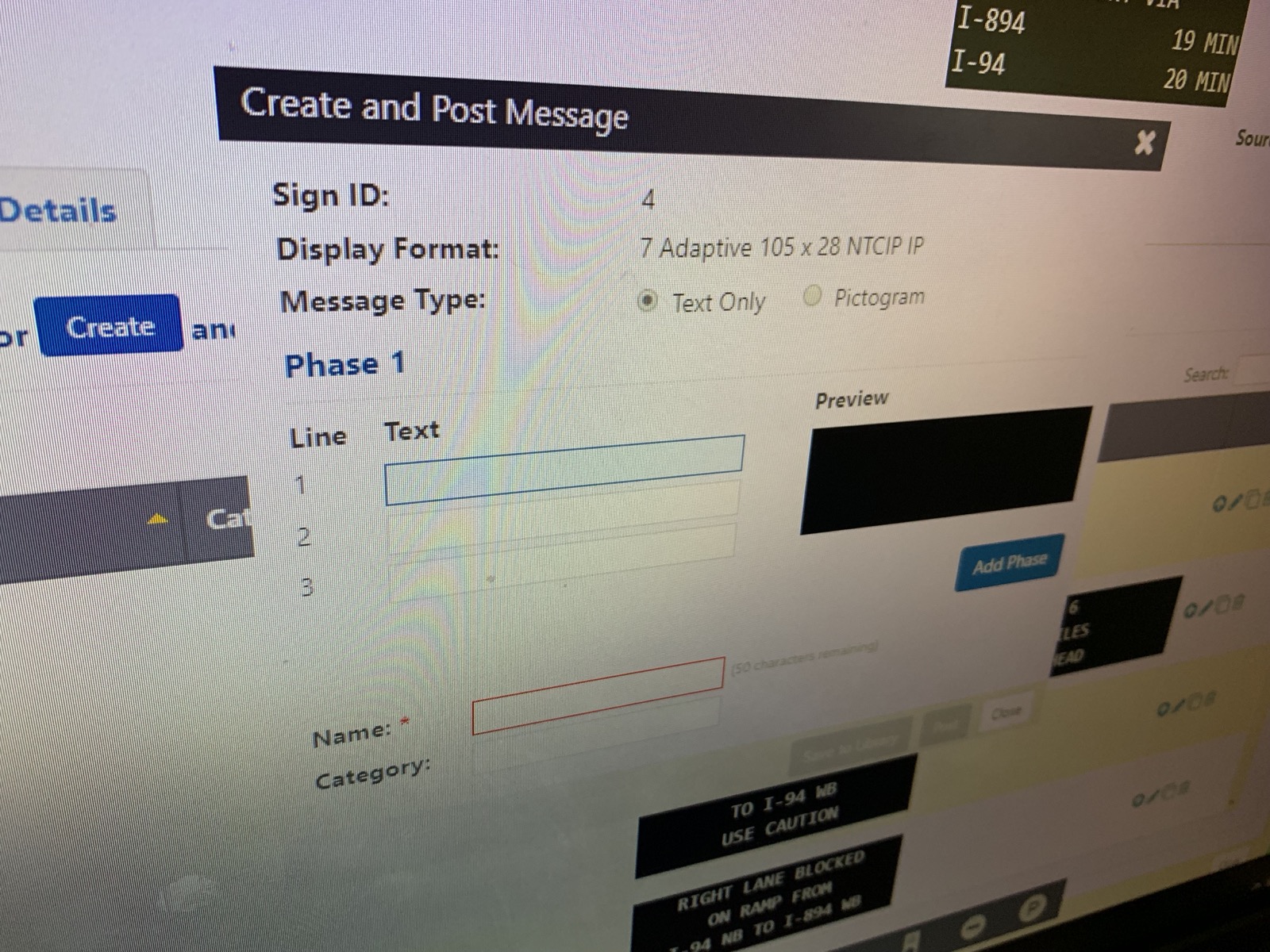 "I'm starting to look now at those hashtag holidays, and trying to see if there's a way to play on those. There's a whole bunch of National Ice Cream Days and Burger Days and all that kind of stuff, and trying to play into some of those. But, along with that, they do have to still be a universal message. We need 70% of the drivers to get what we're saying if we're trying to be clever."

Currently, Riemann says his staff has about 100 messages in the hopper, but the system isn't advanced enough to load them all of the up. He says they do a few at a time, which is an improvement from when they started the DMS in 2016. It's grown way beyond "Click it or ticket," and while Riemann doesn't have hard data on just how well the messages work, it's a fun part of a very serious job.

"It's in its infancy," says Riemann. "I don't know where's it's headed, and that's exciting, too, to see what will come next and what we'll be able to do with it.

The Wisconsin DOT thinks you're dumb

When it snows, stay home Milwaukee