Your guide to dining, drinking and cheering on the Bucks at Deer District

With the Milwaukee Bucks tearing their way through the NBA, both in the regular season and playoffs, all eyes are on Fiserv Forum. But the new Downtown arena didn't just bring the new Downtown arena; it rejuvenated an entire, once-vacant and dreary block of the city, bringing a variety of venues – both local and national – that shine in the shadow of Fiserv Forum, echoing with just as much excitement as its big, Bel Air Cantina-esque brother.

Looking for a place to pregame the Bucks or Marquette game, wash down a win after the final buzzer, tailgate before the night's big concert or merely enjoy a brew and a bite – and then some – on some random evening out? You don't have to roam far from Fiserv Forum to find the place to satisfy your passions.

Here's a guide to all the shiny new spots that should have everyone in Milwaukee and beyond herding over to Deer District. (And for more, here's Lori's guide to drinks, eats and treats stretching beyond the block.) 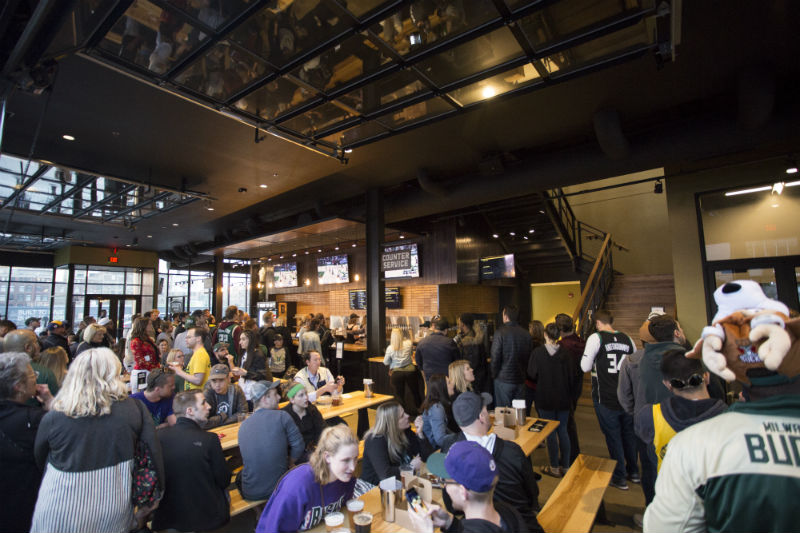 Coming from the East Side to the entertainment block, Good City Brewing was the first to plant its flag in Deer District and the first to open to the public. Even with all the additions around it, the local brewery still has that new car smell – and, most important of all, all those tasty craft beers that put the "good" in Good City Brewing. Plus, if you need some supper to wash down the suds, the new Downtown spot offers a menu of stone hearth fired personal pizzas or some classic dishes from its East Side taproom. 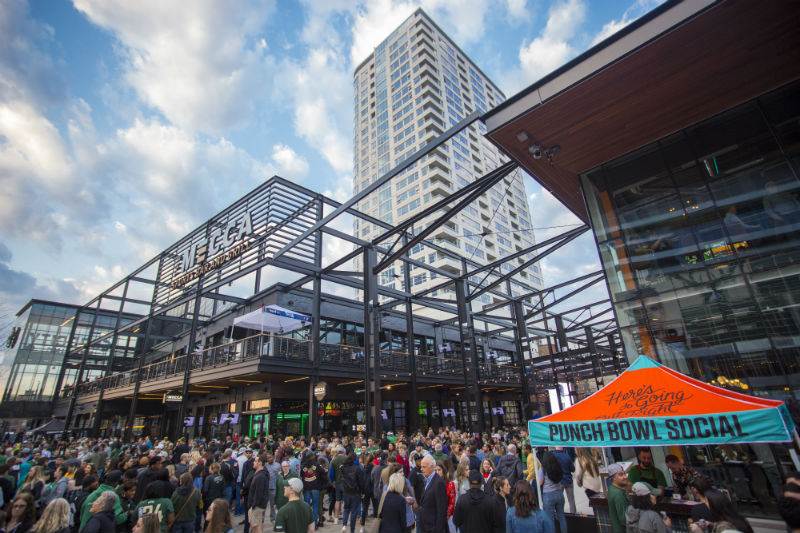 Couldn't get into Fiserv Forum for the big Bucks game? Don't spend the game sadly pawing at the windows of the arena for pity and instead head across the plaza to the next best thing to a live arena-like sports experience: The MECCA Sports Bar & Grill.

The menu sports a hunger-killing lineup of unique bar food takes, including garlicky and herbaceous chicken wings, delicious juicy signature cheeseburgers, crispy shrimp and glorious piles of nachos – plus a bullpen of thirst-quenching brews and cocktails to help wash down your grub and another Bucks win. But here's what you're truly coming to feast on when you come the The MECCA: sports, especially when they come served on a TV as unfathomably mammoth as the bar's centerpiece screen. Add in live-sports-like features and excitement, and you've got a locale worthy of being named after both an arena and a holy place. 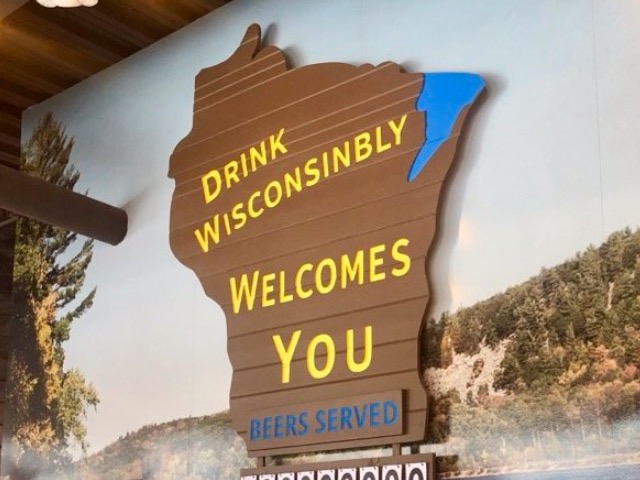 The bad news: Drink Wisconsinbly Pub closed its Walker's Point location. The good news: They did so in order to open an even bigger and better new hotspot in Deer District, complete with all of the Sconnie pride and decor you would expect from the iconic state-beloved brand – and, of course, all of the tasty craft brews, Northwoods-approved cocktails, salty and cheesy bar snacks and old fashioneds one would desire, even from a bubbler if you'd like. (And you would!) It's basically the Up North experience in the big city – no long car ride necessary. 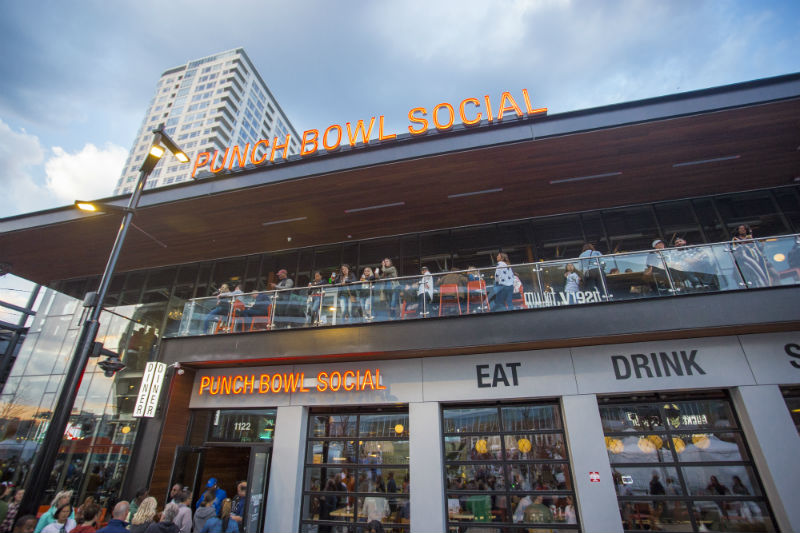 Why leave the games to the arena across the way? That's the thinking at Punch Bowl Social, an "eatertainment" venue dishing out a variety of tasty scratch-made dishes and an even bigger variety of fun activities and games for your whole crew.

As you'd hope with a place with the word "bowl" in the name, you can bowl here – as well as knock out (and knock down) a few games of giant Jenga, show off your vocabulary with wall scrabble, get in some kicks with foosball and sing like a star with Punch Bowl's three private karaoke rooms. And when you build up an appetite from all that activity, the hot spot's got plenty of heightened diner-style dishes and crafty cocktails to nosh on.

With all of that to offer, you'll definitely want to kick it at Punch Bowl Social. 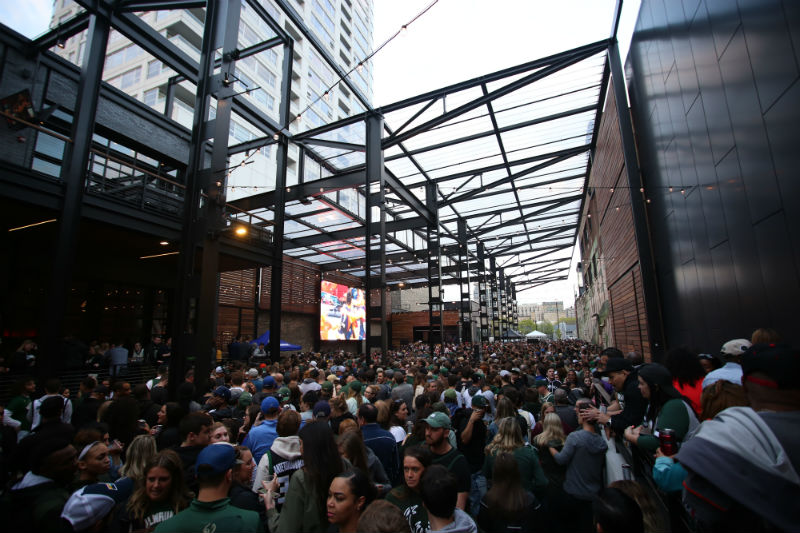 Live blocks, places for fans to gather and cheer as a joyously loud unit outside the main event, are all the craze in sports and new sports venues. And now Milwaukee's got one with its beer garden – or, as it should clearly be called, The "Deer Garden."

Located in an alley across from the arena, beautifully painted in Bucks green and Milwaukee greetings, The Deer Garden features plentiful seating and space for fans to gather and cheer on the Bucks (or the Brewers or the Packers) with multiple spots to buy tasty drinks. And sure, this being Wisconsin, the weather rarely cooperates with fun outdoors activities ... but that's why The Deer Garden comes with a roof to cover most of the main viewing area. Rain or shine, The Deer Garden should bloom with Brew City fans.

An anecdote: While walking back to my car from Deer District, I could hear Bucks fans in the Deer Garden roaring and cheering in excitement all the way from Milwaukee Rep. That's the kind of electricity this place conducts. 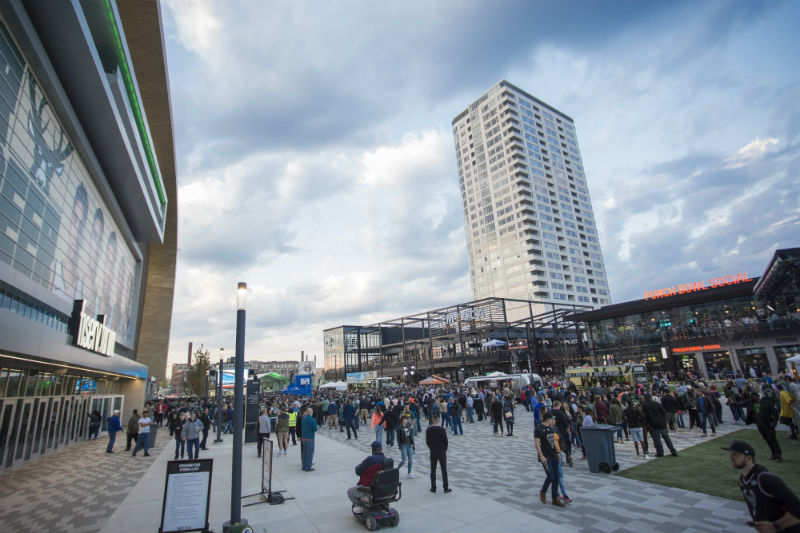 The plaza outside Fiserv Forum isn't just the place you walk through to get to your actual destination or the place where you wait in line to get into the arena. The plaza offers its own entertainment options; right now for the Bucks' current playoff run, the plaza fills with food, games, shops, beverages, contests and, of course, large television screens to watch the Bucks' run through the postseason. Even after the playoffs end (hopefully well into June for the Bucks), the excitement and activity won't quit; over the summer, the plaza will also host yoga on Monday, Tuesdays and Thursdays mornings and classic movies (including "Grease," "Frozen," "Top Gun" and "Raiders of the Lost Ark") on Tuesday nights.

So even when the Bucks are done, it'll always be Deer District season.

Bucks announce schedule for return to basketball, will start July 31 vs. Boston